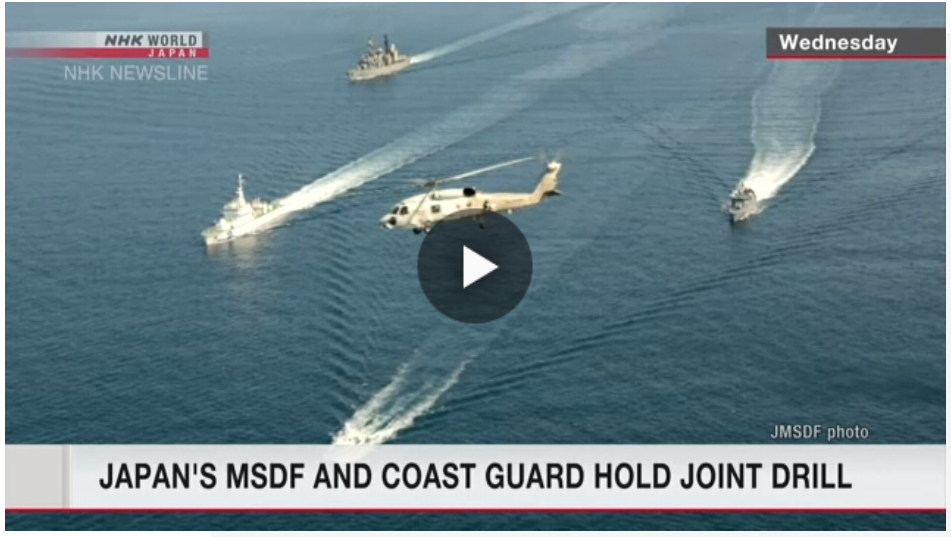 Japan’s Maritime Self-Defense Force and Coast Guard have held a joint drill off southwestern Japan, with a focus on how to respond to a suspicious ship.

The exercise, held off Kyushu on Wednesday, involved a destroyer, a missile boat and two helicopters from the MSDF, and two Coast Guard patrol ships.

It was the first time for the MSDF to have one of its destroyers take part in the annual drill in eight years, apparently to show its enhanced cooperation with the Coast Guard.

The drill was conducted in a closed manner due to the coronavirus pandemic, and reportedly based on a scenario that a suspicious ship was spotted approaching an important facility.

Participants are said to have confirmed procedures for chasing the ship while sharing information through radio communications and forcing it to stop.

A defense ministry source says it is meaningful that the destroyer took part in the drill despite tightening of operations of destroyers due to such duties as patrols and surveillance in waters around Japan.

Observers say the MSDF aims to show that it is strengthening cooperation with the Coast Guard as Chinese government vessels have frequently been spotted navigating in Japan’s territorial waters off the Senkaku Islands in the East China Sea.

Japan controls the islands. China and Taiwan claim them. The Japanese government maintains that the islands are an inherent part of Japan’s territory, in terms of history and international law. It says there is no issue of sovereignty to be resolved over them.

China last month introduced a new law that allows its coast guard to use weapons in waters it considers to be under its jurisdiction.

MSDF Chief of Staff Yamamura Hiroshi told reporters on Tuesday that cooperation with the Coast Guard is becoming more important given the current situation in the East China Sea.