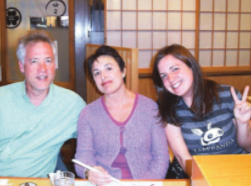 This is Mangokuura Elementary School in Ishinomaki City, Miyagi Prefecture. Children come into contact with English books in its “Taylor Library.” The library contains 1,345 books in English. The library commemorates Taylor Anderson, a 24-year-old American who was teaching English as an Assistant Language Teacher (ALT) at the elementary school until the day of the earthquake.

On March 11, 2011, the elementary school was rocked by a huge earthquake. Ms. Taylor evacuated children to higher ground and ensured their parents took them home. She then headed for home on her bicycle but was swept away by the tsunami on the way.

According to the information compiled by the Ministry of Health, Labour and Welfare, 41 foreign nationals were killed in the Great East Japan Earthquake. Ms. Taylor was the only American victim.

She was from Virginia. When she was an elementary school student, she learned about Japanese culture and fell in love with Japan. She also studied Japanese in junior high school and college.

“I want to be a bridge between Japan and the U.S.” After graduating from a local college, she came to Japan in the summer of 2008 as an ALT and taught English at a total of seven schools including kindergartens, elementary schools, and junior high schools in Ishinomaki City.

“I sang the alphabet song with Ms. Taylor. She was cheerful and fun,” recalls Eriko Sasaki, a 21-year-old university student who was one of Ms. Taylor’s students. 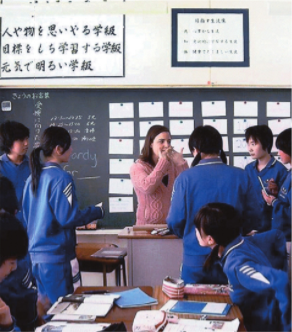 The first news of the disaster reached her family in the U.S. “I was unable to sleep for several days,” said Andy, her 63-year-old father. As he tried to gather information across the time zones, the threat of the tsunami was becoming clearer.

“It was hard to accept the loss of my daughter.”

The father visited and saw the devastated Ishinomaki City. He went to the apartment where Ms. Taylor had lived and saw a wall covered with letters and cards from her students and their parents. Ms. Taylor called it the “wall of love.”

During Andy’s visit to Japan, a small funeral was held at Hiyoriyama Park, which overlooks Ishinomaki City. It was a park on a small hill that protected the lives of evacuees. “It was my daughter’s favorite place,” said Andy. In front of the park was the Pacific Ocean that separates Japan and the U.S. and took her daughter’s life.

A memorial service was held in Washington one month after the disaster. Her mother Jeanne, 63 years old, and Junko Fujisaki, the wife of then-Japanese Ambassador to the U.S. Ichiro Fujisaki, attended. The idea of creating a book collection commemorating book-loving Taylor came up between Jeanne and Mrs. Fujisaki. “If Taylor were alive, she would have wanted to do something for the reconstruction of the city and children,” thought the mother.

In September, the bereaved family visited Mangokuura Elementary School. They held the first ceremony for the presentation of books to the “Taylor Library.” Forty books were presented on this occasion.

“Through reading, Taylor started thinking what her dream would be,” said Andy. “I will present not only books but also a way for children to think about their own dreams,” Andy told the children.

The fund has sponsored an exchange program allowing students from Japan and the U.S. to visit one another. Ms. Taylor’s younger brother, Jeffrey, 30 years old, also teaches in Nara Prefecture as an ALT.

In March last year, Ms. Sasaki visited the U.S. and met with Andy and Jeanne.

“An elementary school pupil learned the joy of English from my daughter, grew up, and came to visit us,” said Andy. “That makes me feel that Taylor’s will remains alive.”

“Even after 10 years, I still feel the sadness of losing my daughter,” Andy added. “But there are new connections that the loss of Taylor has also created in the last 10 years.”

More than 15,000 people lost their lives in the Great East Japan Earthquake. Not only people’s lives were lost but also their dreams and hopes went unfulfilled. It’s been almost 10 years since that day. We listen to the stories of people about how they have spent the last 10 years.