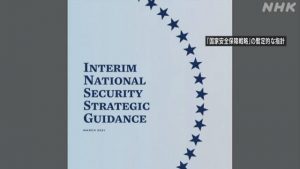 NHK reported at noon that President Biden released a document titled “Interim National Security Strategic Guidance” on Wednesday in which he presented a plan to strengthen ties with Japan and European allies to counter China and Russia. In the guidance, the President reportedly called the alliances with the NATO allies, Australia, Japan, and South Korea “America’s greatest strategic asset” and said that while the U.S. will work to end the war in Afghanistan and right-size the U.S. military presence in the Middle East, the U.S. presence will be “most robust in the Indo-Pacific and Europe.” The network said that the President clarified the U.S. stance of countering China and Russia on the military and security fronts by bringing together the power of its allies. The network added that based on this interim strategic guidance, the President is planning to draft a concrete national security strategy as early as the end of this year.