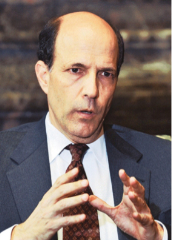 Following the Great East Japan Earthquake, former U.S. Ambassador to Japan John Roos, 66, led the U.S. effort to support Japan immediately after the disaster. He prepared for “Operation Tomodachi,” a U.S. military relief mission, and visited the disaster-stricken areas dozens of times. After returning to his hometown in California, he continues to keep in touch with people in the Tohoku region.

Question: What was the situation like at the time of the earthquake?

Answer: I quickly evacuated the staff of the U.S. Embassy in Akasaka, Tokyo, to the parking lot outside. My office shook so violently that I thought, “The building is going to collapse.” From the parking lot, I immediately called then-President Obama and Secretary of State Clinton to explain the situation. We were very concerned about the safety of Americans in Japan, but at the same time, we confirmed that we would support the Japanese people in their time of crisis.

I also called USFJ Commander Burton Field from the parking lot. This was because it became clear that the tsunami damage and the critical situation at the nuclear power plant required up-to-the-minute coordination to mobilize U.S. forces for the relief effort. From the parking lot, we began the crucial coordination with the U.S. forces, leading to the launch of “Operation Tomodachi.”

A: I’m proud of the success of the operation. First, I want to mention the Self-Defense Forces (who worked in cooperation with the U.S. military for the recovery). I think this was a shining moment in the history of the SDF, demonstrating not only the importance of preserving peace in Japan, but also the importance of its mission to respond to a humanitarian crisis.

Operation Tomodachi was an example of the strength of the alliance between the U.S. and Japan, which had trained together for years. The Japan-U.S. alliance is essential for maintaining peace and security in the Asia-Pacific region, and throughout the operation, the alliance demonstrated its importance from a humanitarian perspective as well.

Q: What did you feel when you visited the disaster-stricken areas?

A: Twelve days after the disaster, I visited the disaster-stricken areas for the first time. When I took a helicopter to inspect the damage from above, it didn’t seem real; it was like watching a movie. After landing and touring the affected areas on my own, what left a strong impression on me was the strength and resilience of the people of Tohoku to overcome the tragic events.

I trembled at the sight of the devastation. Then, at an evacuation center in Ishinomaki City, Miyagi Prefecture, a boy aged 10 or so, ran up to me and hugged me. There were various scenes in the disaster area that moved me.

Q: What are your current interactions with the disaster-stricken areas?

A: I continue interacting with participants of the TOMODACHI initiative (a program to support young people to study abroad), etc. Due to the spread of COVID-19, I was unable to visit Japan last year, so I want to visit the Tohoku region as soon as I can. I want the people of Tohoku to know how much I still respect them.

Q: What are your thoughts on the Japan-U.S. relationship?

A: As U.S. Ambassador to Japan, I experienced a deep connection between the peoples of Japan and the U.S. We should not, however, take this relationship for granted. During the past four years, the U.S. faced a leadership crisis. Under a new leader who deeply understands the importance of Japan, the crisis will be resolved. Japan and the U.S. are the world’s two leading democracies. It is essential that the two countries will further strengthen the relationship and work together to address global issues such as the pandemic, nuclear proliferation, and climate change.