TOKYO — With Taiwan expected remain a key agenda item for the U.S. under President Joe Biden, Japan’s ruling Liberal Democratic Party is reaching across its traditional fault lines to discuss comprehensive strategies regarding the island.

Japan has no diplomatic ties to Taiwan. But the LDP recently decided to launch a project team on Taiwan policy nevertheless, as it had become increasingly clear that Biden would follow in the Trump administration’s footsteps by making it a key focus.

The LDP’s Taiwan team held its inaugural meeting Feb. 10, three weeks after Biden’s inauguration. Members hailed from the pro-Beijing and pro-Taipei wings of the party, discussing how to keep Japan in lockstep with the new U.S. administration on Taiwan and China.

“We need to create conditions to facilitate Taiwan’s membership in the TPP,” a participant at the meeting said, referring to the 11-member regional trade pact officially known as the Comprehensive and Progressive Agreement for Trans-Pacific Partnership. Others pushed for greater coordination between Tokyo and Taipei on state affairs. 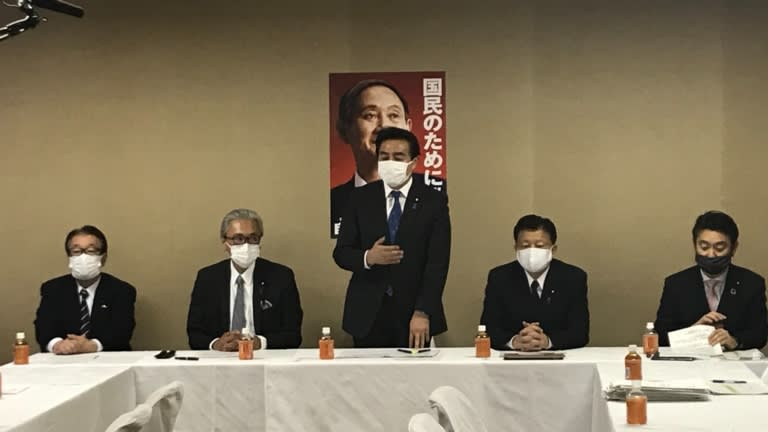 Masahisa Sato, head of the LDP’s Foreign Affairs Division, speaks at the first meeting of the party’s Taiwan project team on Feb. 10.

The new project team is expected to submit recommendations to the government by April on bolstering Japanese connections with Taiwan, including on the island’s economy and on exchanges between their lawmakers.

The LDP’s Foreign Affairs Division also set up a project team on human rights around the same time. China’s crackdown on pro-democracy activists in Hong Kong gave rise to concern that Taiwan could be targeted next.

Japan cut diplomatic ties to Taiwan in 1972, when it normalized relations with mainland China. A Japan-Taiwan parliamentarians’ union has since served as an unofficial link between the two island nations.

But the island was long a contentious issue within the LDP, with lawmakers divided between support for Beijing or Taipei based on where they stood in the party’s factional rivalries.

Then-Prime Minister Nobusuke Kishi visited Taiwan and Southeast Asia for his first overseas trip in office in 1957, eager to bolster ties with U.S. partners to pave the way for a revision of Japan’s security treaty with the U.S. The now-Hosoda faction, where Kishi’s grandson and former Prime Minister Shinzo Abe began his political career, for years spearheaded Japan’s connections with Taiwan.

Meanwhile, Prime Ministers Kakuei Tanaka and Masayoshi Ohira were instrumental to Japan normalizing ties with the mainland. Their factions have since been passed down to party heavyweights Wataru Takeshita and Fumio Kishida, respectively.

The LDP’s division was thrown into sharp relief in 2000 over a possible trip to Japan by former Taiwanese President Lee Teng-hui. Then-Foreign Minister Yohei Kono was reluctant to issue a visa to Lee. But then-Prime Minister Yoshiro Mori stepped in to make the trip a reality the following year.

Abe focused heavily on Japan’s ties with China during his tenure as prime minister, but he also visited Taiwan while the LDP was in the opposition. His brother, Defense Minister Nobuo Kishi, is secretary-general of the Japan-Taiwan parliamentarians’ union.

LDP Secretary-General Toshihiro Nikai — who was a member of the former Tanaka faction, now the Takeshita faction — is a frequent visitor to China and has spoken on a number of occasions with Chinese President Xi Jinping and other high-level officials.

Factional politics appear to have a weaker grip in the new Taiwan project team. Sato, the chairman, is a member of the traditionally China-favoring Takeshita faction and a former Self-Defense Forces official who has stressed the importance of ties with Taipei from the standpoint of the Japan-U.S. alliance.

“Unlike in the past, the current shift in focus toward Taiwan is being driven more by security needs than by traditional ties to Taiwan,” said Yasuhiro Matsuda, professor of international politics at the University of Tokyo.

Growing public antipathy toward Beijing in Japan also plays a role. A poll last autumn by think tank Genron NPO found that 89.7% of Japanese respondents had a negative view of China, up from a year earlier.

“It’s become harder for lawmakers to openly express pro-China sentiment,” said Masaya Inoue, a professor specializing in Japanese political and diplomatic history at Seikei University in Tokyo. “The government has no choice but to handle diplomacy with China itself.”