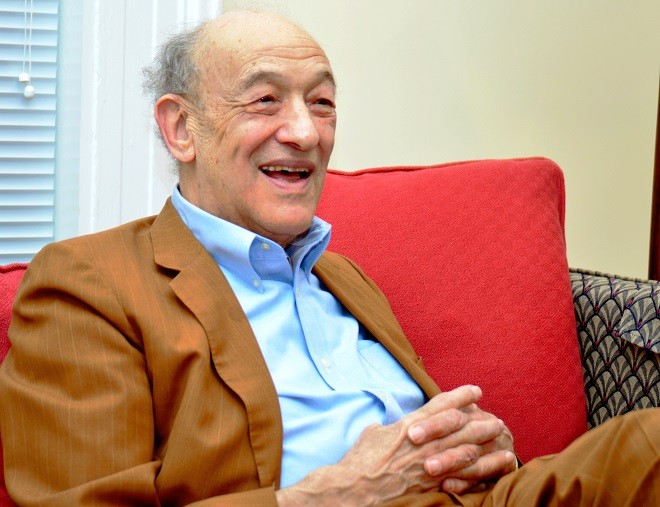 Ezra Vogel gives an interview in the living room of his home in April 2014. (Kenji Minemura)

Four years ago, the late Ezra Vogel invited me to his home in a Boston suburb near Harvard University.

It was my 52nd time to do so since I became a visiting scholar at the university. But that day, his usual smile was nowhere to be seen.

When he took me down to his basement for the first time, I saw more than 10,000 books in Japanese and Chinese stacked on shelves.

“I’m not confident about completing my book,” he said, his shoulders drooped as he stood in front of a large stack of materials.

He had collected hundreds of documents to write a biography on Hu Yaobang, the reform-minded former general secretary of the Communist Party of China.

Hu’s rapid political reforms in the 1980s set China on a course that worried China’s leaders, so Deng Xiaoping removed him from office.

Very little literature on Hu remains, and few Chinese have been willing to talk about him. In the basement, I saw my mentor sigh in resignation and look truly dejected for the first time.

Vogel held regular “study sessions” at his home where people discussed politics and economics. Thousands of Japanese bureaucrats and researchers joined in those sessions over the years, but that is just one aspect of his character.

Very few people in Japan know that he held “study sessions” for Chinese speakers on separate days. It seems that his aim was to bring out the true voices from both countries by deliberately separating the two groups.

Among the large number of visitors who regularly stopped by his home, I saw high-ranking Chinese government officials. In addition to his many works on Japan, Vogel also spent more than 10 years writing a biography on Deng Xiaoping, the champion of China’s bold economic reforms.

I once asked Vogel over drinks, “are you Japan-savvy or China-savvy?” He responded jokingly, “I have a friendly relationship with both Japan and China.” He continued by saying, “I have devoted my life to prevent the two countries where I lived so many years from fighting each other again.” He stuck to Hu Yaobang because Hu helped to build a strong postwar relationship between Japan and China.

Even an outstanding expert on China, such as Vogel, has made mistakes in analysis.

As 2017 drew to a close, I shared with him some inside information I had heard.

I told him that “President Xi Jinping will abolish the current 10-year limit for the presidency.”

He point-blank refused to believe it, countering that, “If Xi Jinping did that, he would overturn Deng Xiaoping’s policy and return China to a dictatorship.”

Just a few months later, Xi did just that by abolishing the presidential term limits (up to two terms and 10 years).

Vogel criticized Xi’s stance on strengthening his power and becoming “The Strongest Leader,” saying that “political reform seems hopeless and freedom of speech has been suppressed.”

In July 2020, when Vogel turned 90, I sent him a birthday wish. He replied, “I want to do my best to improve the relationship between the United States and China.” He also said he would return to work on the biography of Hu Yaobang.

He probably left for heaven worried about what would happen to U.S.-China relations in this “New Cold War.” I would like to carry the torch and continue his mission, but under these circumstances, the answer seems nowhere to be found.