Spacecraft explodes after offer for free trip around the moon 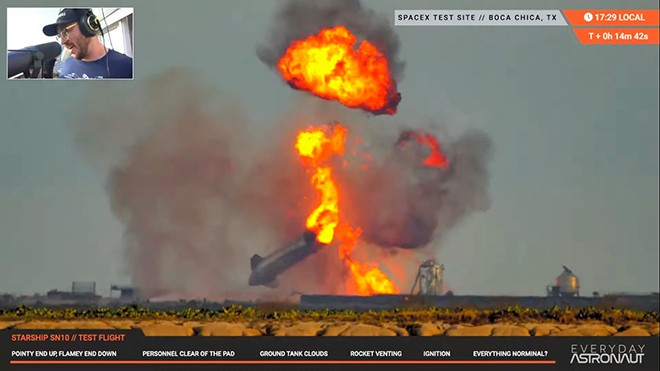 SpaceX’s Starship exploded shortly after Japanese businessman Yusaku Maezawa said he would pick eight members of the public to accompany him in the spacecraft for a trip around the moon.

SpaceX, headed by Elon Musk, launched the Starship prototype SN10 from the company’s test site at Boca Chica, Texas. It reached an altitude of 10 kilometers, stayed aloft for a while, and then landed.

It was Starship’s first successful landing, and it drew cheers from spectators. Musk tweeted, “Starship SN10 landed in one piece!”

But within around 10 minutes, the stainless-steal rocket exploded and burst into flames.

Musk later tweeted, “One day, the true measure of success will be that Starship flights are commonplace,” and “RIP SN10, honorable discharge.”

He recently created headlines by announcing that eight people would be chosen for the lunar trip in 2023.

The voyage will be free, so applicants do not need to be super-rich like Maezawa. But they should be team players and committed to using the space trip experience to “help speed up activities that are useful to society and people,” he said.

He also said the candidates should be “able to fully support the activities of others on the spaceship and cooperate.”

“I will pay the entire cost. It is a chartered trip. Let’s make it a fun trip together,” Maezawa, 45, said in a statement.

Applications will be accepted until March 14. The final decision on the travelers will be made around late May after screening, interviews, medical checkups and other processes.

Maezawa tweeted that he had received more than 100,000 applications from around the world as of the early morning of March 3.

The lunar trip is the first one organized by a private company.

The trip from Earth to the moon will take several days. The spacecraft will return to Earth in a week or so after circling the moon. The passengers will not land on the moon.

Ten to 12 people, including pilots and Maezawa, are scheduled to board the spacecraft.

Starship is 9 meters in diameter and 50 meters in length and can carry 100 people.

SpaceX plans to conduct an unmanned test space flight by the end of the year. The company hopes to eventually make Starship available for U.S.-led manned lunar missions.

The last time humans reached the orbit of the moon was in the Apollo 17 mission in 1972.