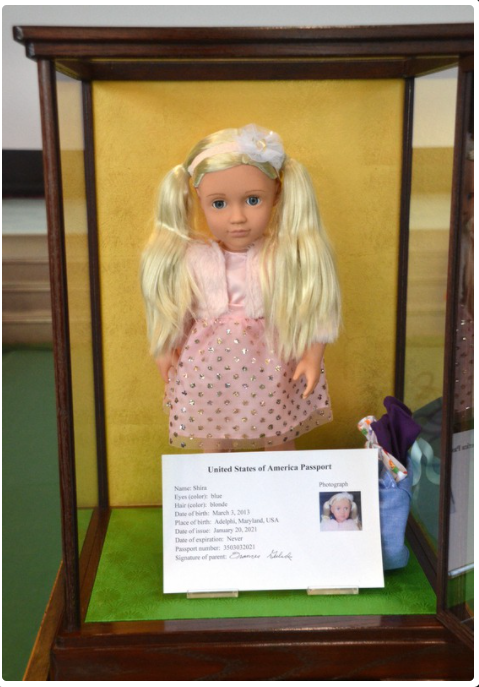 This photo shows Shira the doll in her case at Nishioji Elementary School in Hino, Shiga Prefecture, on March 3, 2021. According to the attached passport, Shira just celebrated her 8th birthday. (Mainichi/Shinji Ito)

HINO, Shiga — A grandson of an American missionary, who worked for friendship between Japan and the U.S. through blue-eyed dolls, gave a new doll to an elementary school in this western Japan town, and a presentation ceremony was held at the school on March 3.

Sango Yamada, 11, a sixth-grade student at Nishioji Elementary School in Hino, Shiga Prefecture, expressed her gratitude, saying, “We hope that the new coronavirus pandemic will end soon, and we will treasure the doll.”

According to the written history of Hino and other resources, about 13,000 blue-eyed dolls were sent to Japan from the United States in 1927 at the request of Dr. Sidney Gulick. Four schools in the town received the dolls, including Hino Elementary School, but Nishioji Elementary School did not receive one because the school was not selected through a lottery.

Since the exchange between Hino Elementary School, where the doll is kept, and Dr. Gulick’s 84-year-old grandson, Sidney Gulick III, continues to this day, Nishioji Elementary School students also watched a play about the blue-eyed dolls last fall. They also learned about war and peace between Japan and the U.S.

The sixth graders wrote down their impressions of the play and their hopes for the doll gift, and together with origami works and photos of local scenery, sent them to Gulick III, who lives in Maryland, U.S. A doll named Shira arrived at the school in February. A change of clothes for the doll and a bag hand-sewn by Gulick’s wife, Frances, 79, were also included in the package.

At the presentation ceremony, a video of Mr. and Mrs. Gulick regretting that they could not visit Japan due to the new coronavirus was shown. Also introduced was a congratulatory message from the U.S. Consul General in Osaka-Kobe, Richard Mei Jr. He explained that in the U.S. today, various dolls are made with different eye and skin colors, and he encouraged the students to come to the U.S. one day and feel firsthand the diversity that is the greatest characteristic of Americans and the source of their strength. 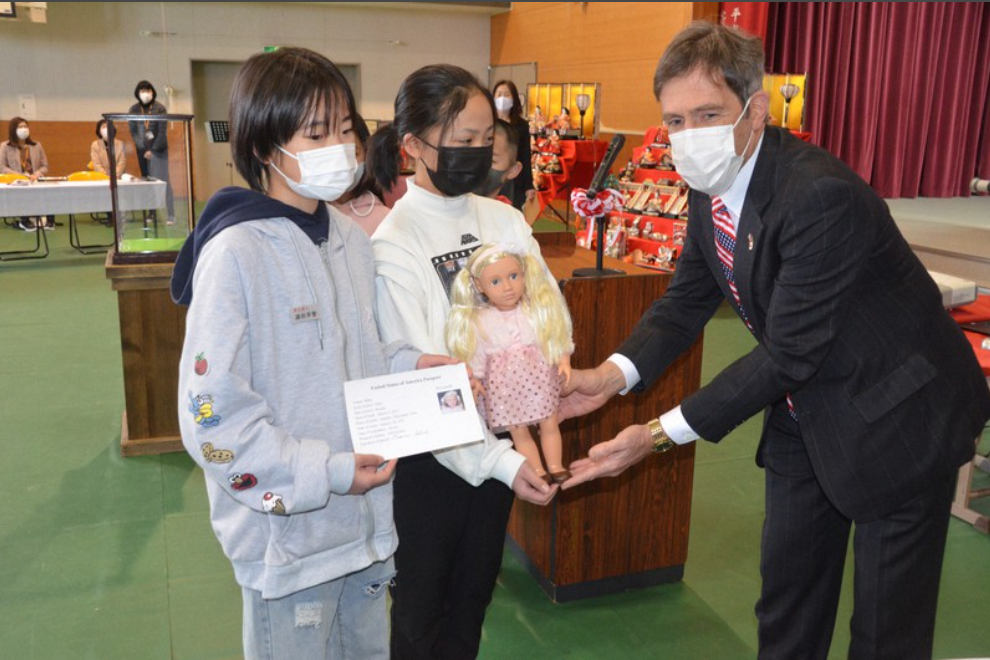 Representatives of the children who received a blue-eyed doll from Austin H. Moore, right, vice president of the Hino international friendship association, are seen at Nishioji Elementary School in Hino, Shiga Prefecture, on March 3, 2021. (Mainichi/Shinji Ito)