Monument of “Operation Tomodachi” set up in Kesennuma, Miyagi 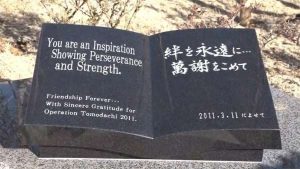 Fuji TV reported on Sunday evening that a ceremony was held in Kesennuma, Miyagi, earlier in the day to unveil a monument expressing appreciation for “Operation Tomodachi” conducted by the U.S. military after the Great East Japan Earthquake on March 11, 2011. The network said the U.S. military provided support to the island of Oshima in Kesennuma, which was cut off from the mainland, by helping remove the debris and delivering goods under “Operation Tomodachi” immediately after the disaster in April. The monument bares in English the words: “You are an inspiration showing perseverance and strength. Friendship forever…With sincere gratitude for Operation Tomodachi 2011.” The network said Maj. Caleb Eames, a U.S. Marine who participated in “Operation Tomodachi,” also attended the ceremony, quoting him as saying: “It’s remarkable to see that the community has just come back tremendously. But even more than the physical recovery, you can really feel the emotional and spiritual recovery….Ganbatte, Oshima!”