Editorial: No guarantees extended state of emergency will contain virus 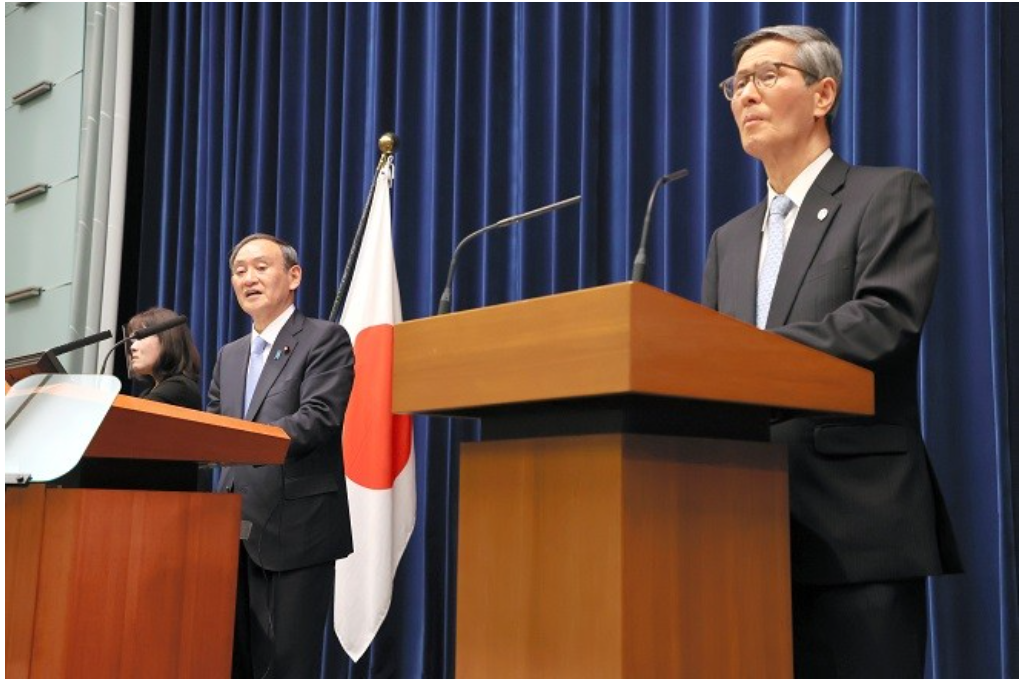 Prime Minister Yoshihide Suga, left, attends a news conference on March 5 along with Shigeru Omi, chairman of the government’s panel of experts dealing with the COVID-19 health crisis. (Pool)

The government formally decided to continue the state of emergency for the novel coronavirus, with the approval of its panel of health experts, for two weeks for Tokyo and the neighboring prefectures of Kanagawa, Saitama and Chiba until March 21.

Prime Minister Yoshihide Suga deserves to be harshly criticized for failing to deliver on his promise to lift the measure by the initial March 7 deadline after weeks of repeatedly stressing his commitment to the target date.

Be that as it may, the decision was clearly dictated by the grim COVID-19 situation in Japan.

The importance of providing further policy support to people and businesses that will take an additional hit from the step, such as restaurants, needs no elaboration.

Since the state of emergency was declared in January, the number of new cases has been declining steadily. But in Tokyo, current levels of new infections are roughly the same as those in mid-November, when the third wave of COVID-19 began.

The downward trend has been showing troubling signs of flattening out over the past couple of weeks, raising concerns that lifting the state of emergency now would most likely lead to a resurgence.

To make matters more worrisome, new variants of the virus believed to be more contagious are also spreading.

Obviously, the top policy priority must be to prevent a fourth wave if the government is to mitigate the economic damage as much as possible.

But that does not mean the extension promises to bring the pandemic under control in two weeks. Some experts assert that the two-week extension will not be enough.

The central government, in tandem with local authorities, needs to act swiftly to determine why the number of new cases has stopped falling and what additional measures need to be taken to break the impasse. Policymakers must then implement steps based on answers to these questions.

The nationwide vaccination campaign is finally under way in Japan. But it is a source of concern that the outlook of the program remains unclear due to the government’s wavering policy. Genuine progress in the campaign will offer real hope for an end to the public health crisis.

In the meantime, policymakers should focus on tackling the key challenge of preventing the spread of infections so that the number of patients will not exceed the capacity of hospitals in any area to care for them.

The burden must be shared effectively among medical institutions, such as securing sufficient beds for COVID-19 patients by transferring those who have recovered to other hospitals. If medical workers are swamped by an excessive number of patients, the vaccination program will be hampered.

An analysis of recent data by experts advising the health ministry over the pandemic found many mystery cases of clusters where the source of infection cannot be traced in the Tokyo metropolitan area.

To trace sources of infection, it is vital to beef up the program for epidemiological surveys, which has been scaled down due to surges in new cases.

It is also important to ensure regular tests at facilities for the elderly as well as hospitals, which tend to be hit by clusters, while making tests more readily available for places and groups which pose a greater risk of infections. Such efforts can help policymakers detect early signs of a new wave of infections.

There are also concerns about the situation in the six prefectures for which the state of emergency was lifted at the end of last month, including Osaka. In some of these prefectures, the number of new cases has not fallen as expected. There is no room for complacency about the risk of a resurgence in these areas.

This is a season when many people move around and get together due to graduation and job relocation. With society growing both tired of and “accustomed” to the situation, the prime minister and prefectural governors have a duty to send out effective messages that resonate with citizens to win their understanding and cooperation for continued efforts to contain the virus.