TOKYO — When a country flouts international rules, the world’s powers respond with a particular pattern of escalation.

First, they condemn the actions with news conferences and statements. If this criticism does not bite, they impose economic sanctions to drive home their point. As a further step, they exert military pressure if needed, including dispatching warships.

When it comes to China, major European countries have begun to take the third option. In one example, France sent a frigate to the waters near Japan on Feb. 19 to conduct a joint military exercise with Japanese and U.S. forces.

Such moves come amid a growing backlash in Europe against China over Beijing’s crackdown on human rights in Hong Kong and the Xinjiang Uygur Autonomous Region, as well as its heavy-handed actions in the South China Sea.

A survey by Pew Research Center released in October showed that more than 70% of respondents in the U.K., France and Germany have negative views of China. This public dissatisfaction and anxiety over China in Europe’s three leading nations has now manifested itself in what could be seen a form of gunboat diplomacy.

This marks an intriguing shift for Europe, whose geopolitical energies have focused mainly on Russia since the end of World War II.

Particularly notable is the move of France, which has New Caledonia and other territories in the South Pacific. France also has several thousand troops, ships and aircraft stationed in the region. Besides sending a frigate, France revealed on Feb. 8 that it had sent a nuclear-powered attack submarine in the South China Sea. “It is very unusual to go public with a nuclear submarine’s highly confidential movements,” said an Asian security official.

A “hunter-killer” submarine’s primary mission is to find and sink enemy submarines. By dispatching one to the South China Sea, France is sending a clear warning to China, which is suspected by some analysts to have deployed nuclear-missile-equipped submarines there.

France is expected to also send an amphibious ship by this summer and hold its first-ever military exercise with Japan and the U.S. with an eye on defending remote islands for the first time.

Germany, though less of a sea power than France or the U.K., is also expected to send a frigate to the Indo-Pacific this year.

A European diplomatic source said these moves reflect rising alarm over China in European capitals. Their already dim views on Beijing were further darkened by the crackdown in Hong Kong and Xinjiang, as well as by the coronavirus pandemic, the source said.

China’s military buildup also looms as a risk to Europe’s economic interests. The South China Sea is a crucial shipping lane carrying about 10% of trade for the U.K., France and Germany.

The Chinese military possesses about 350 ships, more than the U.S. Dispatching just a few European ships will not budge the military balance now favoring China in terms of material. Even so, security officials in Asia and Europe say the actions of the U.K., France and Germany can be expected to help counter China’s military in at least two ways.

First, if the Europeans demonstrate their ability and willingness to project naval power in the Indo-Pacific, China will have no choice but to modify its operations plans with respect to Taiwan and the South China Sea. The Chinese military will have to assume that the U.K., France and Germany, as well as Japan and Australia, will provide some form of support to U.S. forces in the event of a conflict. This would set a higher bar for a Chinese decision on military action.

Even if the U.K., France and Germany do not join a battle directly, they could support U.S. forces indirectly, said Nicolas Regaud, who was deeply involved in Indo-Pacific strategy at the French Defense Ministry until 2019.

“If China takes military action in the Indo-Pacific involving the U.S., for instance in the Taiwan Strait, Europe is unlikely to just watch and do nothing,” said Regaud, who now serves as a senior research fellow and director for international development at the Institute for Strategic Research of the Ministry of Armed Forces. “Politically, the Europeans would be obliged to take sides in order to preserve the trans-Atlantic relationship.”

“Doing so, they would accept to pay a price, as China will retaliate in weaponizing trade, finance, cyberspace, etc. Militarily, France, Britain and Germany may fill in the gap left by the U.S. Navy in the Atlantic, the Mediterranean or the Gulf,” he said.

Regaud said there are “several other options for Europe to support the U.S. military operations, such as providing intelligence and supporting civilians to evacuate.” 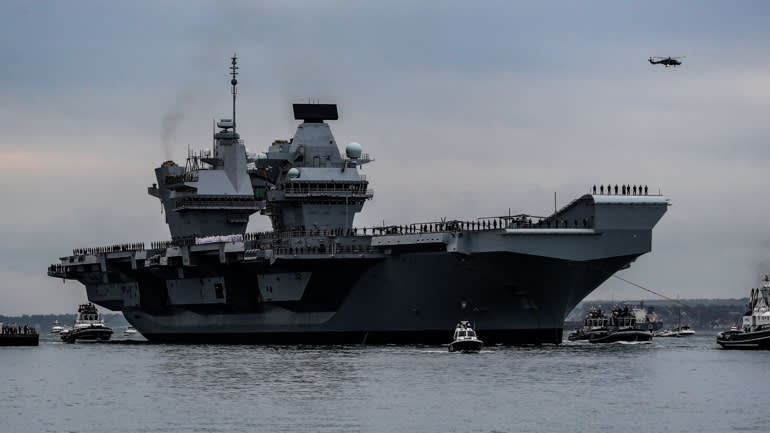 The U.K. plans to dispatch the state-of-the-art aircraft carrier HMS Queen Elizabeth to the Indo-Pacific by the end of this year.   © Reuters

The HMS Queen Elizabeth is itself an example of hybrid operations of the U.K. and U.S. militaries. It carries U.S. Marine Corps aircraft as well as British planes. U.S. destroyers also join British ships in escorting the aircraft carrier.

The dispatch of warships by the U.K., France and Germany to the Indo-Pacific could draw a backlash from China and create new tension. But its positive effects — in terms of deterring Chinese adventurism in the Taiwan Strait and the South China Sea — arguably outweigh its negative ones.

European countries hardly present a united front toward China. Hungary and Poland distance themselves from France and Germany. The European Union reached a broad agreement on an investment pact with China late last year and has no intention to give up business in China.

But over the long term, Europe is likely to take a tougher stance on China. A NATO report released on Dec. 1 positioned China as a threat along with Russia.

If Europe deepens its military engagement with the Indo-Pacific, Japan’s roles will also increase. Japan is the only Asian country that has a port where aircraft carriers can visit and receive full-scale maintenance.

Japan should assume that British, French and German ships will come regularly. It will be important for Japan to do its part to maintain this cooperation by boosting its ports’ preparedness and planning joint exercises.