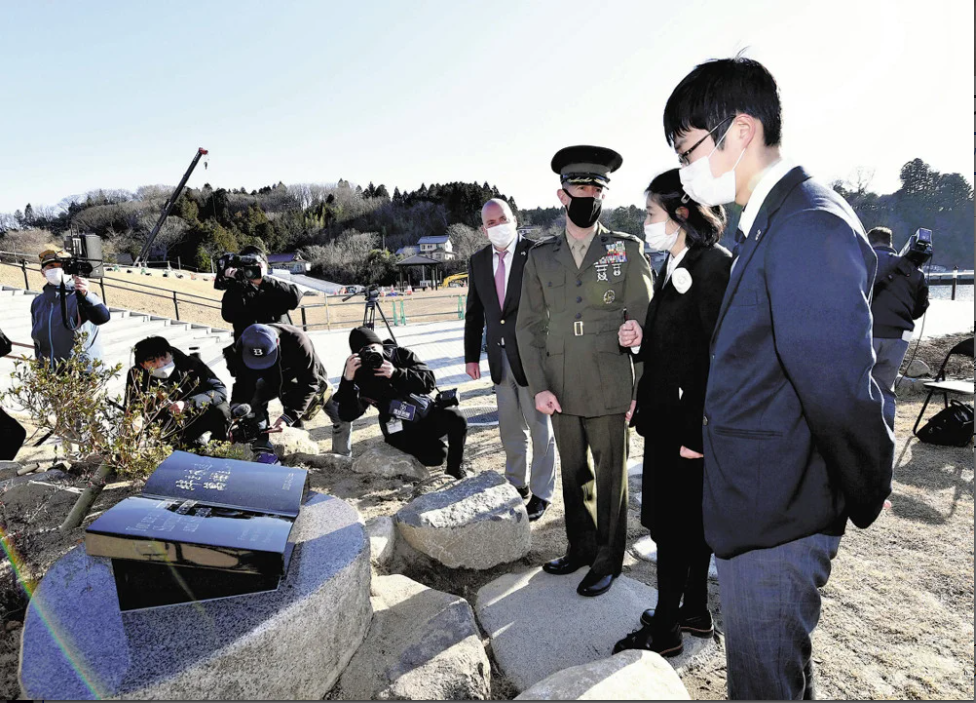 Wataru Kikuta (right) and Caleb Eames (third from right) stand in front of the monument unveiled in Kesennuma City, Miyagi Prefecture, on March 7.

A ceremony was held on March 7 on Oshima Island in Kesennuma, Miyagi Prefecture, where the U.S. military conducted Operation Tomodachi following the Great East Japan Earthquake, to unveil a monument created by a local volunteer group as a proof of their friendship with the U.S. Marines. The stone monument is shaped like an open book and is about 40 cm long and 70 cm wide. A Japanese message that reads “Kizuna wo eien ni – Bansha wo komete [May the bond last forever – with deep gratitude]” was carved on the right page of the book.

Caleb Eames, a 43-year-old Marine who helped reconstruct the island as part of Operation Tomodachi, attended the ceremony and was reunited with Wataru Kikuta, 18, with whom Eames has kept in contact after removing debris together, for the first time in five years. Eames said with a smile: “The stone monument is a testament to the islanders having overcome difficulties. I am glad to see the smiles of Wataru and other islanders.” Wataru also said with a smile, “I want to keep in touch [with Eames].” (Abridged)