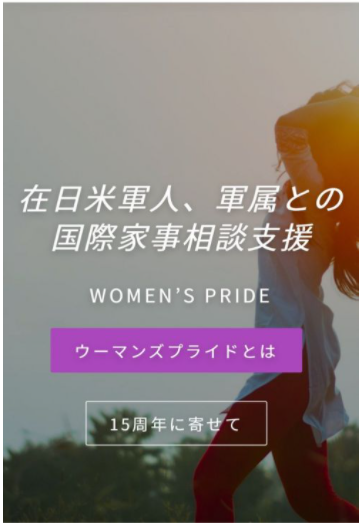 A screenshot of the Women’s Pride homepage. This year, the NPO celebrates its 15th anniversary.

This year,  Women’s Pride, a nonprofit organization that offers consultations to men and women in international relationships, celebrates its 15th anniversary. Over these years, the Chatan-based group has provided a place for men related to the U.S. military and Japanese women to engage in talks in order to solve issues they face, such as child custody, unpaid child support, and visiting rights. After 15 years of engaging in this work, Misaki Smith, the group’s representative, says she keenly feels the need for an alternative dispute resolution (ADR) organization in Okinawa. The NPO plans to establish a general incorporated association called “Association for supporting international households” in mid-March and aims to turn the group into a certified group based on the ADR promotion act in the future. (Abridged)