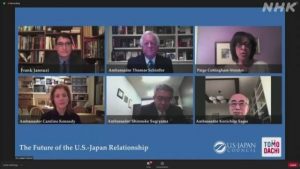 NHK reported this afternoon on a virtual event hosted by the U.S.-Japan Council today to commemorate the 10th anniversary of the Great East Japan Earthquake. The network said the participants included former U.S. ambassadors to Japan Roos and Kennedy and other officials from the U.S. side as well as former Japanese ambassadors to the U.S. from the Japanese side. According to the network, Ambassador Roos, who was the U.S. envoy at the time of the disaster, disclosed that U.S. military experts had said that people might not be able to live in Tokyo following the Fukushima nuclear accident. “My responsibility I always kept at the front of my mind was twofold: number one to ensure the health and safety of Americans and number two to strengthen the relationship between Japan and the United States,” he said. In addition, the network showed then-Japanese Ambassador to the U.S. Fujisaki saying: “We were showered by origami cranes, flowers, and money as well…. We were lucky, fortunate that the U.S. was our ally and standing by us at the most difficult time in our history.” The network added that the ambassadors reaffirmed the importance of further strengthening bilateral diplomatic relations as well as a short-term exchange program for youth that began after the Tohoku disaster and other cultural exchange programs between the two nations.