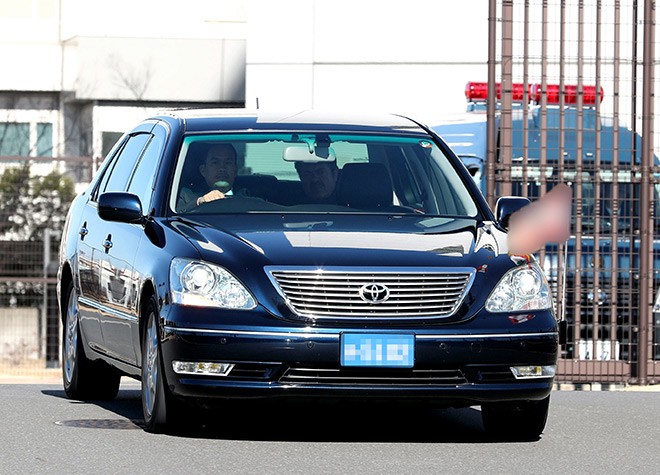 A motor vehicle with a blue license plate indicates it belongs to a foreign embassy. (Asahi Shimbun file photo)

The diplomatic missions of Russia and China are by far the worst offenders when it comes to unpaid traffic fines for parking violations.

Shingo Miyake of the ruling Liberal Democratic Party pointed out at a March 12 session of the Upper House Budget Committee that Russia and China were the two worst offenders over the past three years and that the amounts unpaid far surpass the third-place nation.

The annual amount of fines uncollected from all foreign diplomats came to about 40 million yen ($367,000) in recent years, according to testimony made at the committee session in response to Miyake’s questions about unpaid traffic tickets.

Miyake asked about cases where the five-year statute of limitations expires without payment of the fine. Officials said there were 3,118 such cases in fiscal 2018. With each ticket normally carrying a fine of 15,000 yen, that would add up to 46.77 million yen. There were 2,736 cases the following fiscal year for a total of 41.04 million yen in unpaid fines.

Police normally will seize assets of ordinary drivers who fail to pay fines. But an official with the National Police Agency said while notices to pay fines are sent to embassies, the diplomatic immunity enjoyed by those working at foreign missions means the consent of embassy staff is required before any assets can be seized to pay off the fines.

A Foreign Ministry official said requests are made to the ambassadors at embassies where diplomats are frequently ticketed and fail to pay the fines to encourage payment.

Miyake called for stricter measures to be implemented for those embassies that are the worst offenders.

He cited an exemption on paying gasoline taxes extended to diplomats and suggested the perk be rescinded.

“The current situation is that the same nations are the worst offenders every year,” said Takashi Uto, a senior vice minister at the Foreign Ministry, in response. “We are discussing the issue with other ministries and agencies to determine what can be done.”