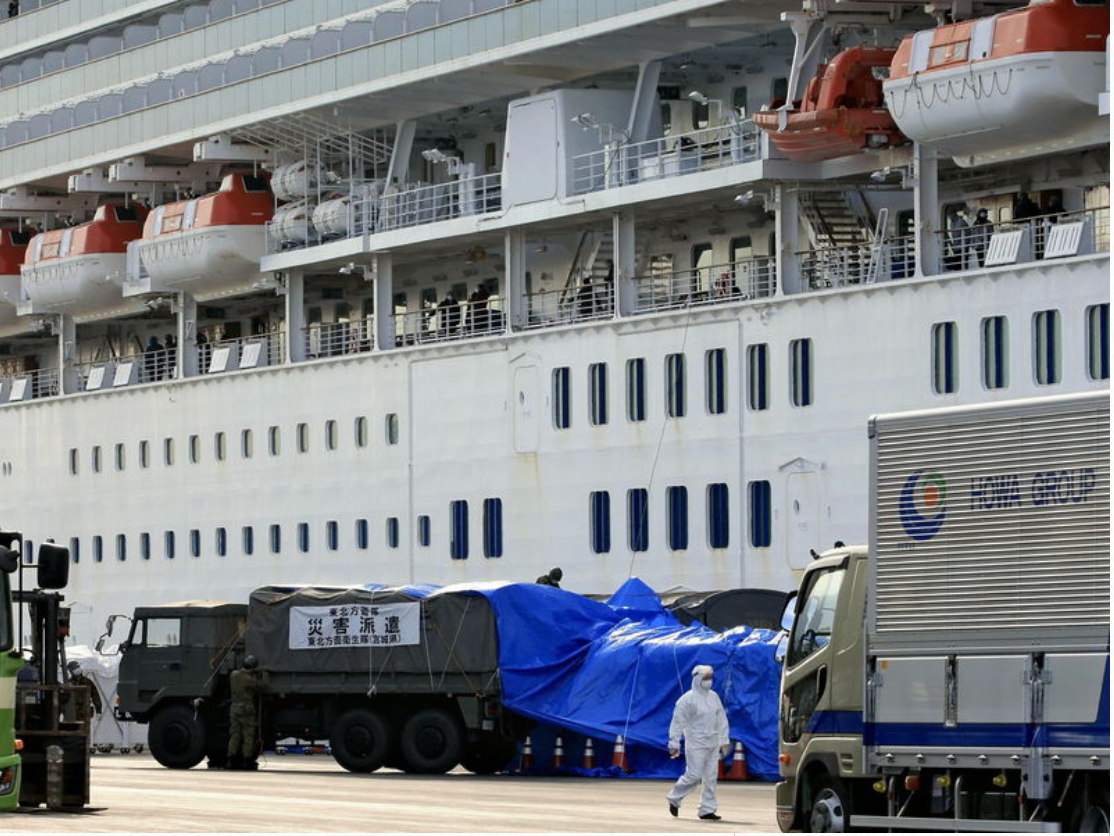 Yomiuri Shimbun file photo / Self-Defense Forces vehicles are seen alongside the Diamond Princess cruise ship, where the outbreak is taking place, at Yokohama Port in February 2020.

The Self-Defense Forces are increasingly being recognized for the medical care they have provided amid the prolonged novel coronavirus crisis, accepting and treating large numbers of infected patients at SDF hospitals and dispatching staff nurses to facilities with infection clusters.

The Defense Ministry operates the National Defense Medical College Hospital and 16 other SDF hospitals across Japan. The hospitals’ primary role is for SDF staff doctors and nurses, who number about 1,000 each, to provide care for SDF personnel and their families.

Although eight of the hospitals, including the medical college hospital, also treat the general public, most Japanese people previously knew little about SDF medical care.

The SDF’s involvement in the pandemic first attracted public attention when an infection cluster occurred on the Diamond Princess cruise ship about a year ago. SDF staff provided medical care for passengers on the ship, while the SDF Central Hospital in Setagaya Ward, Tokyo, accepted many of its infected patients.

The SDF Central Hospital accepted the first coronavirus patient from the ship on Feb. 7, 2020. The hospital continued accepting patients day after day, ultimately treating 109 passengers and crew members from 17 countries and territories, including Japan, as inpatients by March 17 2020, when the last inpatient was discharged.

The number of COVID-19 inpatients reached 102 at its peak.

On the Diamond Princess, which was moored at Yokohama Port, more than 700 people were found to be infected with the virus. Finding facilities to treat them was extremely difficult — many hospitals refused admission, and those that did accept patients often took in only several people at a time.

Hideaki Anan, director general of medical crisis measures of Kanagawa Prefecture, was in charge of assigning COVID-19 patients to hospitals at the time. “Coordinating and adjusting the entire operation was greatly helped by the fact that there were hospitals that accepted many patients at one time,” Anan said.

Accepting many patients at the SDF Central Hospital was clearly a breakthrough in coordinating patients’ hospitalization. “I realized that SDF hospitals can be used this way,” Anan said.

Ground Self-Defense Force Col. Shigehito Takeshima, a specialist in emergency medicine and head of the SDF Central Hospital’s general medical department, said: “Accepting patients from the Diamond Princess became a good, stimulating experience for the hospital staff. I think the feeling of being useful to the Japanese people helped boost the staff’s sense of mission.”

SDF hospitals have a unique background. They usually have few inpatients — even at the SDF Central Hospital, which is in a residential area near the central part of Tokyo, the occupancy rate of its 500 beds is said to be between 20% and less than 40%.

The hospital did not disclose its actual occupancy rate to The Yomiuri Shimbun. However, it said it usually keeps a certain number of beds unoccupied such that it can always accept patients in emergency situations such as disasters, explaining why it was able to accept so many coronavirus patients.

Having very few inpatients, however, can cause a serious problem. The medical staff working there have few opportunities to build clinical expertise through their daily work.

The occupancy rate at general hospitals is between 80% and 90%, because it is difficult to turn a profit unless the beds are efficiently used. This also means the medical staff work on many types of cases and thus have more opportunities to acquire practical knowledge and skills.

SDF hospitals have been described as inferior when it comes to emergency medicine. The main reason cited is that SDF hospitals were not given a clear status in community medicine, resulting in having no emergency medicine departments for many years. Even the large-scale SDF Central Hospital was not designated as a hospital for accepting emergency patients around the clock until 2016. It is still in the process of developing a full-fledged system for this.

SDF medical staff are given opportunities to gain experience at general hospitals, but “there isn’t an adequate environment for them to develop skills as medical specialists,” said a person associated with the SDF medical system. This may be why some leave the SDF, feeling that their work is not worthwhile.

The SDF managed to deal with the coronavirus panic largely because of capabilities that resulted from its routine training and organizational strength, not because it has many specialists in infectious diseases. SDF hospitals started preparing for crises caused by high-risk infectious diseases, such as the Ebola hemorrhagic fever, only a few years before they were designated in 2017 as medical institutions for dealing with such diseases.

Treatment of infectious diseases and emergency medicine are much needed in times of crisis. As the coronavirus crisis drags on, it is critical to create an environment that fosters medical personnel who can deal with such situations.

Tamura added, “The SDF needs to train specialists by building a network with relevant organizations overseas and in Japan, such as the World Health Organization and the National Institute of Infectious Diseases, through regular personnel exchanges and other measures.”

The Self-Defense Forces have been accepting infected patients at SDF hospitals and dispatching nurses to facilities where infection clusters have occurred. But surprisingly, none of the SDF doctors or nurses have been infected with the novel coronavirus.

According to the Defense Ministry, six SDF hospitals, excluding the National Defense Medical College Hospital, accept coronavirus patients from the general public. They had admitted 1,567 inpatients as of Feb. 15. SDF nurses were dispatched to five prefectures, including Hokkaido, Osaka, and Okinawa.

During the support operations on the Diamond Princess, an employee of the Health, Labor and Welfare Ministry and a nurse of the Disaster Medical Assistance Team (DMAT) who had been dispatched to the ship were found to be infected.

SDF staff members also participated in the support operations, including the high-risk task of collecting throat mucous membrane samples from passengers for polymerase chain reaction (PCR) testing, but none were infected.

As details about the novel coronavirus were mostly unknown at the time of the support operations, the SDF had its dispatched medical staff members take infection preventive measures that were more strict than the ordinary standard. As to why there have been no in-hospital infections at SDF facilities, the SDF Central Hospital said that training for preventing infections has been thoroughly conducted.

The hospital also said it may be connected to the fact that SDF personnel are accustomed to working in teams.

According to Osamu Kunii, the Head of Strategy Investment and Impact of the Global Fund to Fight AIDS, Tuberculosis and Malaria, which works on international infectious disease control: “The SDF are competent in providing medical care. They also have their own means for transportation and various skills, such as setting up makeshift tents. The SDF have the potential to be more useful. It is important for the SDF to be able to deal with possible various health-related crises in the future, including pandemics of new infectious diseases and bioterrorism, through strategically collaborating with related organizations.”