TOKYO — Japan may have decided to bar overseas spectators from the Tokyo Olympics this summer as a coronavirus precaution, but South Korean President Moon Jae-in hopes Tokyo will make an exception to help him cement his diplomatic legacy.

As the end of his term approaches, Moon is considering a trip to Japan during the games that could serve as a steppingstone toward fulfilling a promise by North Korean leader Kim Jong Un more than two years ago, at the first North-South summit in over a decade.

The trip to the North in September 2018 stirred up much controversy in South Korea.

Moon took a commemorative photo with Kim on the peak of the sacred Mount Paektu — where Kim Il Sung, the founder of the Kim dynasty, is said to have battled against Japanese occupation — and attended the so-called Mass Games, a gymnastics and art festival with tens of thousands of participants. Both moves were seen as taboo in the South.

But one of the biggest surprises of the trip was the last line of the joint declaration released by the two leaders, stating that Kim had agreed to visit Seoul at Moon’s invitation.

The North Korean leader said in a joint news conference after the meeting that he had promised to go to Seoul “at an early date.” Moon explained that this specifically meant by the end of that year, barring extraordinary circumstances.

The meeting came three months after the first-ever U.S.-North Korea summit between Kim and then-President Donald Trump in Singapore. It is not hard to imagine that the leaders of both the North and the South hoped that a visit to Seoul would spur an official declaration of the end of the Korean War and a subsequent peace treaty.

The South Korean government had looked to schedule the Seoul trip for mid-December, and there were reports of rooms being held at multiple top-tier hotels in the capital.

Yet Moon’s urging was ultimately in vain, and the trip was scrapped. The stalling of denuclearization talks with the U.S. — the core of the matter for Pyongyang — was likely a factor. Kim sent a personal letter to Moon expressing regret that the visit did not come to pass and hope that it could take place in 2019.

But the breakdown of a second Trump-Kim meeting the following February threw North-South relations off course. Though the American and North Korean leaders did meet again that June, at the truce village of Panmunjom, top-down diplomacy failed to produce a breakthrough.

Pyongyang turned its frustration on Seoul. “We were deceived by the words of President Moon” as he tried to mediate between Washington and Pyongyang, a North Korean diplomatic source said.

North-South relations deteriorated rapidly from there, exemplified by Pyongyang’s destruction of a joint liaison office in the border city of Kaesong this past June, and remain soured today. 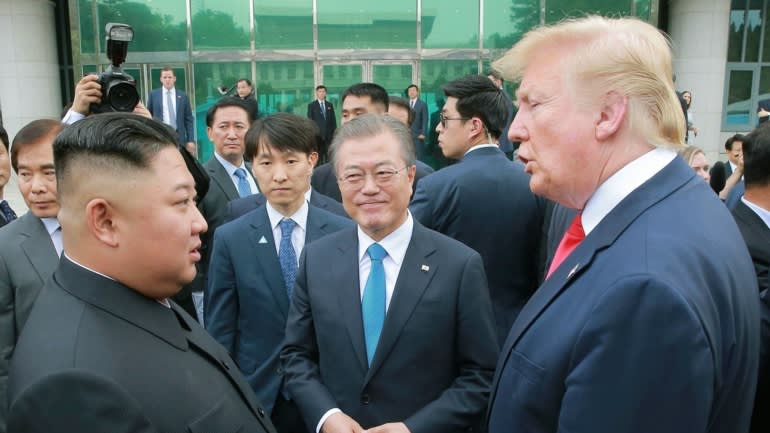 Kim meets in 2019 with then-U.S. President Donald Trump for the second time in Panmunjom, with Moon seeking to mediate.   © KCNA via Kyodo

Kim’s sister, Kim Yo Jong, has been at the forefront of the trenchant criticism of Seoul coming out of Pyongyang. Some in South Korea still hold out hope that the siblings are engaged in a “good cop, bad cop” routine and that Kim Jong Un will reopen dialogue.

Moon has not given up on the North Korean leader’s promise from two and a half years ago, according to a South Korean government insider. Indeed, the president hopes to arrange the much-delayed visit to Seoul to cap off his time in office as the end of his term approaches in May next year.

The last chance for such a meeting is likely around December — three months before the March election to determine Moon’s successor. A successful visit to Japan would provide a significant boost to the prospects of a candidate from Moon’s progressive wing of South Korean politics.

Moon made the decision to incorporate the Tokyo Olympics in a speech to commemorate the March 1 movement for Korean independence.

When Park Jie-won, director of South Korea’s National Intelligence Service, visited Japan in November, he expressed to the Japanese hosts the concept of a four-way summit coinciding with the Tokyo Olympics.

Even if such a grand vision turns out to be a pipe dream, Moon still desires to have the Tokyo games be a venue for inter-Korean peace, much like the Pyeongchang three years ago. Moon aims to attend the Tokyo Olympics and create an opportunity to reach a breakthrough with the North.

Moon only arrived in Japan once, in 2018, during the three-party summit with then-Japanese Prime Minister Shinzo Abe and Chinese Premier Li Keqiang. Earlier that year, Abe visited South Korea to attend the Pyeongchang Winter Olympics.

South Korea has long believed that the Tokyo Olympics could lead to a resolution concerning frictions between Seoul and Tokyo over wartime labor and “comfort women.” Moon’s evolving stance toward Japan as of late suggests an intent to push forward relations with both Tokyo and Pyongyang.

In South Korea, it is said that presidents of either conservative or progressive stripes aspire to hold inter-Korean summits upon their inauguration. Moon has met with Kim in summits three times during his tenure.

Trends show that South Koreans are more welcome of easing tensions with the North rather than with the progress of denuclearization. Every time Moon meets with Kim, his approval ratings go up.

Several of South Korea’s past presidents have ended up falling from grace upon leaving office. A visit to the South by North Korea’s leader would serve as a powerful legacy for Moon’s presidency.

Moon and Kim agreed at the 2018 summit in Pyongyang to field combined inter-Korean teams for multiple Tokyo Olympic events. The two also saw eye-to-eye on promoting a 2032 Olympic Games jointly hosted by the North and the South. Moon communicated both of those visions to Thomas Bach, the president of the International Olympic Committee.

The Tokyo Olympics may seem like one of the few things keeping inter-Korean relations from completely falling apart. But there has been nary a response from the North: the regime has not even made clear if it will participate in the Tokyo games. The chance that Moon’s words and ambitions will come to nothing cannot be ruled out.