The Quad comes of age: In pictures

WASHINGTON — “Today’s summit meeting shows that the Quad has come of age,” Indian Prime Minister Narendra Modi told fellow leaders from the four countries that make up the Quadrilateral Security Dialogue — the U.S., Japan, India and Australia — as he made his opening remarks at Friday’s virtual Quad Summit from New Delhi.

Moments later, Australian Prime Minister Scott Morrison weighed in from Canberra with his own description, saying the Quad represented “a new dawn in the Indo-Pacific.”

The joint statement issued at the conclusion of the conference echoed what many in Washington’s new and previous administrations have been pushing consistently: to “commit to promoting a free, open rules-based order, rooted in international law to advance security and prosperity and counter threats to both in the Indo-Pacific and beyond.”

But it would be U.S. national security adviser Jake Sullivan who had the sound bite of the day. Friday’s summit had taken the Quad to a new level,  “cemented a group of strong democracies” and that the Quad was “now a critical part of the architecture of the Indo-Pacific.”

To better understand what happened at the summit, what preceded it and what is to follow in the next days, Nikkei Asia has captured important moments from the Quad’s diplomatic, military, economic and even human aspects, in pictures. 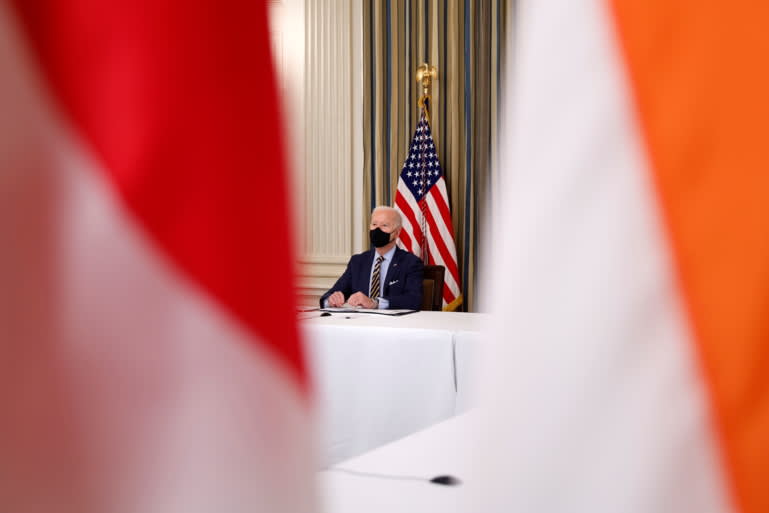 U.S. President Joe Biden participates in a virtual meeting with Asia-Pacific nation leaders at the White House on March 12.   © Reuters

U.S. President Joe Biden participated in his first international summit through a virtual meeting with Quad leaders at the White House. Though China was discussed, the official messaging from Washington underplayed the security dimensions of the four-nation partnership, and reiterated that the Quad was more concerned about fighting the COVID-19 pandemic. “Drawing on each of our strengths,” said a fact sheet released after the summit by the White House, “we will tackle this complex issue with multi-sectoral cooperation across many stages of action, starting with ensuring global availability of safe and effective vaccines.” Modi emerged as the star of the summit. Considering India is the only country in recent history to have had an actual military engagement with China, which resulted in 20 Indian soldiers being killed last summer in the Himalayas, the climate in New Delhi has been changing, with a rethink urged by Indian political and military elites about entering into a strategic alliance.

“This evolution in New Delhi’s strategic thinking matters a great deal because India is central to the Quad,” writes Jeff Smith, research fellow at the Heritage Foundation. “The group can only move as quickly as its most reluctant member. Japan, Australia, and the United States are already bound by the thickest of security and intelligence bonds. With India involved at a higher level of strategic coordination, this potent democratic triangle becomes a quadrilateral colossus, accounting for half of the planet’s defense spending, and a third of its population and GDP.” 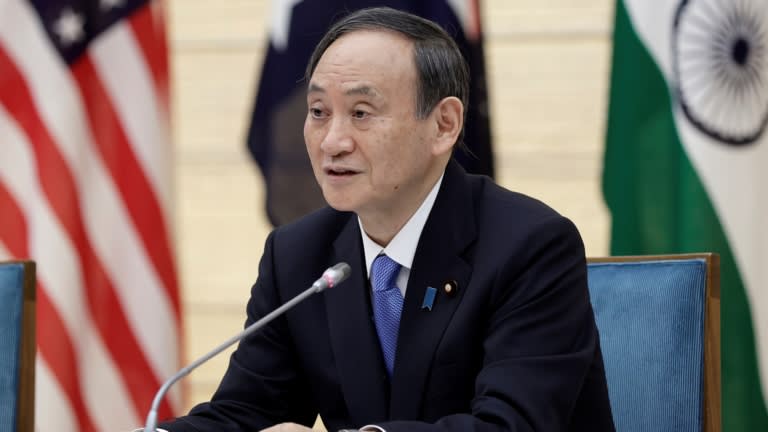 Even though he spoke last in the opening round of the summit, Japanese Prime Minister Yoshihide Suga was the first foreign leader invited to visit the White House. For Suga, both the Quad and the coveted invitation are opportunities to fight off criticism about his handling of the coronavirus — Japan is the lowest of the Group of Seven economies in vaccine inoculation rates — and political scandals related to his son. It will be a chance to display to the world the strength of the U.S.-Japan alliance and an opportunity to impress on Biden that Tokyo and Washington’s policy priorities, such as climate change and a free and open Indo-Pacific, are much aligned. The strength of the alliance between Tokyo and Washington was displayed on March 9 when a U.S. Air Force C-130J Super Hercules aircraft dropped Japanese soldiers over Camp Fuji, Japan, during Airborne 21 exercise, considered the largest U.S.-Japan airborne operation in history. Emphasizing the importance of the Indo-Pacific region, Secretary of State Antony Blinken and Secretary of Defense Lloyd Austin will become the first cabinet-level members of the Biden administration to travel to Japan and South Korea in the coming week.

Austin began his Asia trip on Saturday by flying into Hawaii, home to the U.S. Indo-Pacific Command, where he was greeted by Adm. Philip Davidson, the commander. Davidson has called the Quad a “diamond of democracies

,” with remarkable potential to expand cooperation. In Tokyo, Blinken and Austin will participate in the U.S.-Japan Security Consultative Committee — the so-called 2-plus-2 meeting — with Foreign Affairs Minister Toshimitsu Motegi and Defense Minister Nobuo Kishi.

The Americans will then attend a 2-plus-2 with South Korean counterparts Foreign Minister Chung Eui-yong and Minister of Defense Suh Wook in Seoul. From a defense standpoint, the alliances with South Korea and Japan are a force multiplier, David Helvey, the acting assistant secretary of defense for Indo-Pacific affairs, told reporters Friday. The trip illustrates the U.S “commitment to a rules-based international order that places all nations on a level playing field and holds them responsible for preserving the principles that underpin it,” Helvey said. A boy walks past a graffiti amidst the spread of the coronavirus disease on a street in Navi Mumbai, India on March 5.    © Reuters

India’s vaccination program has become a major undertaking and has appeared in graffiti on the streets of Mumbai. The first major deliverable to emerge from the Quad Summit, according to Indian foreign secretary Harsh Vardhan Shringla, is a plan by all four members “to pool their financial resources, manufacturing capabilities and capacities and logistical strengths so as to ramp up the manufacture and distribution of COVID-19 vaccines in the Indo-Pacific region.”

India, as one of the world’s major pharmaceutical production and research hubs, is at the center of this Quad initiative to deliver up to one billion COVID-19 vaccination doses by next year. “This is a special initiative which is designed proactively to mitigate the impact of COVID-19 among countries in the Indo-Pacific,” Shringla said. “We are talking about huge investments in creating additional vaccine capacities in India for export.”

As for financing the ambitious initiative, he said the initial capacity will be financed both by the U.S. and Japan, while Australia will be contributing toward logistical delivery. Marines and sailors participate in a moving drill aboard the USS Germantown in the Philippine Sea on Feb. 27. (Photo courtesy of U.S. Department of Defense)

On Feb. 27, U.S. marines and sailors participated in a drill aboard the USS Germantown in the Philippine Sea. The announcement of new military formations, the recent extensions of basing agreements with Japan and South Korea, and the possibility of increased regional access for the U.S. military as discussed with Singapore, all underscore one resonant security factor: China.

“At a time when the region is facing mounting pressure from the People’s Republic of China, and the continued threat from North Korean nuclear weapons and ballistic missile programs, this [upcoming 2-plus-2] trip sends an important signal of resolve to work with allies, partners and like-minded nations to promote a peaceful, stable and resilient order that benefits us all,” said Helvey. 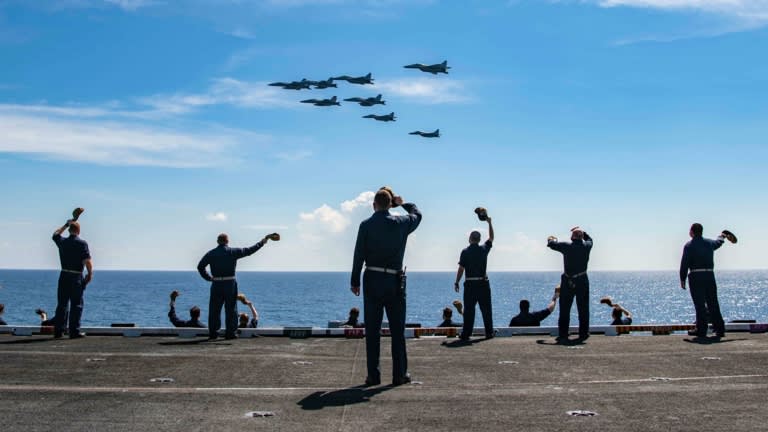 The increasing proximity of the Quad armed forces was on display in November, as they took part in Malabar, an India-led multinational exercise held in the Indian Ocean. The 2020 version of the exercise was important because after a break of several years it included Australia, which had left the drill that is hosted annually by India and includes the U.S. Navy and the Japanese Self-Defense Forces.

There have been reports out of India that the Quad and France are planning to hold a naval exercise in the Bay of Bengal under the “La Perouse” banner from April 4 to 7 with missile-guided destroyers, frigates, submarines and surveillance aircraft taking part. 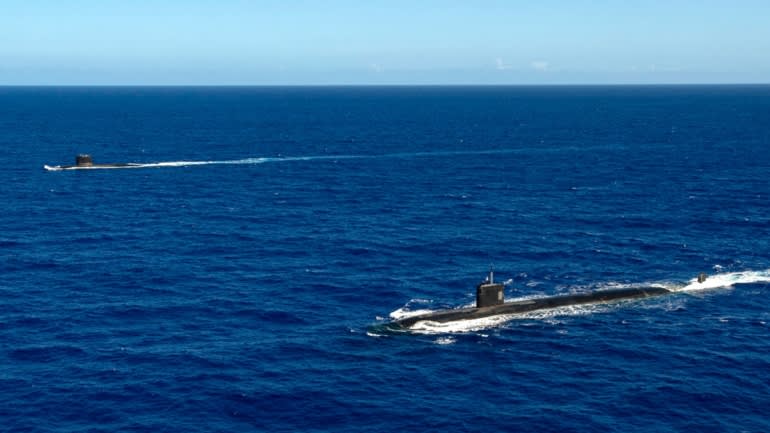 The Los Angeles-class fast-attack submarine USS Asheville, right, and the French navy Rubis-class nuclear powered submarine FS Emeraude steam in formation off the coast of Guam during a photo exercise on Dec. 11, 2020 in the Pacific Ocean. (Photo courtesy of the U.S. Navy)

“Clearly, China has triggered the Quad to move from talking the talk to walking the walk. It’s all right to say it’s not against China, but one can say it’s about China.”

After visiting Tokyo and Seoul this week, Austin will travel on to India where he will meet with Indian Defense Minister Rajnath Singh.

“They will discuss ways to better cooperate in the major defense partnership the U.S. has with India. These will include enhanced information sharing, regional security cooperation, defense trade and the effects of new domains,” said a Pentagon announcement.