TOKYO/NEW YORK/WASHINGTON — The leaders of the U.S., Japan, India and Australia met virtually Friday in the first-ever summit for the Indo-Pacific security grouping known as the Quad.

“The Quad is going to be a vital arena for cooperation in the Indo-Pacific. And I look forward to working closely with all of you in the coming years,” Biden said.

A senior U.S. administration official told reporters Thursday that Biden had worked hard to bring the leaders together, his first multilateral summit to host as president, to make a clear statement of the Indo-Pacific region’s importance.

The unspoken glue of the Quad, formally the Quadrilateral Security Dialogue, is unquestionably the need for a vehicle to face the rise of China. But the Biden administration made efforts to pad the agenda so as to dilute the “anti-China” flavor.

In a joint statement titled “The Spirit of the Quad” released after Friday’s meeting — the first ever for the Quad — the leaders pledged to “strengthen our cooperation on the defining challenges of our time” but did not directly mention China. The closest they came was speaking of “challenges to the rules-based maritime order in the East and South China Seas.”

They agreed to hold an in-person summit by the end of 2021.

A White House fact sheet released after the summit described a four-way partnership on vaccine production and distribution, including financial aid. Working groups will be set up on climate change and critical and emerging technology, it said.

One key development for the Quad is that India agreed to take part in the leaders’ summit. New Delhi has traditionally eschewed formal alliances and kept other countries, including China, at a roughly equal distance. India accordingly hesitated to upgrade the informal grouping to a summit until now.

The other three Quad countries sought to ease the way for New Delhi to participate with a wide-ranging agenda that kept potentially touchy security issues out of the spotlight. India also had the privilege of announcing the summit, and Modi spoke second after Biden at the meeting.

“It is good to be among the friends. I thank President Biden for this initiative,” Modi said in his remarks. “Excellencies, we are united by our democratic values and our commitment to a free, open and inclusive Indo-Pacific.”

He said the Quad’s agenda covering vaccines, climate change and emerging technologies makes the Quad “a force for global good.”

Citing an ancient Indian philosophy of “one family,” Modi said: “Today’s summit meeting shows that Quad has come of age. It will now remain an important pillar of stability in the region.”

U.S. Defense Secretary Lloyd Austin is set to visit India during his Asian tour kicking off next week after stops in Japan and South Korea. Morrison, in his opening remarks, called Friday’s meeting “a new dawn in the Indo-Pacific.”

“As we emerge from this global pandemic and the global recession, let us together create a different future,” he said. “It is the Indo-Pacific that will now shape the destiny of our world in the 21st century.”

Japan’s Suga told reporters after the meeting that he had proposed working with such countries as Association of Southeast Asian Nations members to pursue a free and open Indo-Pacific and that the other leaders had agreed.

Suga said that he had expressed strong opposition to the unilateral Chinese effort to alter the status quo and that the four leaders had agreed to cooperate on the issue. U.S. national security adviser Jake Sullivan briefed reporters from the White House after Friday’s summit, saying the meeting “cemented a group of strong democracies that will work together going forward to secure a free and open Indo-Pacific.”

He said it addressed “key regional issues” including freedom of navigation and freedom from coercion in the South and East China seas, the North Korean nuclear issue, and the coup and violent repression in Myanmar.

“The four leaders did discuss the challenge posed by China,” Sullivan acknowledged, “and they made clear that none of them have any illusions about China. But today was not fundamentally about China. Much of the focus was on pressing global crises, including the climate crisis and COVID-19.”

The first major pledge out of the summit covered vaccines. Sullivan said Quad leaders “made a massive joint commitment today: with Indian manufacturing, U.S. technology, Japanese and American financing, and Australian logistics capability, the Quad committed to delivering up to 1 billion doses to ASEAN, the Indo-Pacific and beyond by the end of 2022.”

Washington, through the U.S. International Development Finance Corporation, will help Indian drug company Biological E increase its capacity for COVID-19 vaccine production to at least 1 billion doses by the end of 2022. Tokyo, through the Japan International Cooperation Agency, is in talks to provide concessional yen loans to New Delhi to expand manufacturing of vaccines for export. 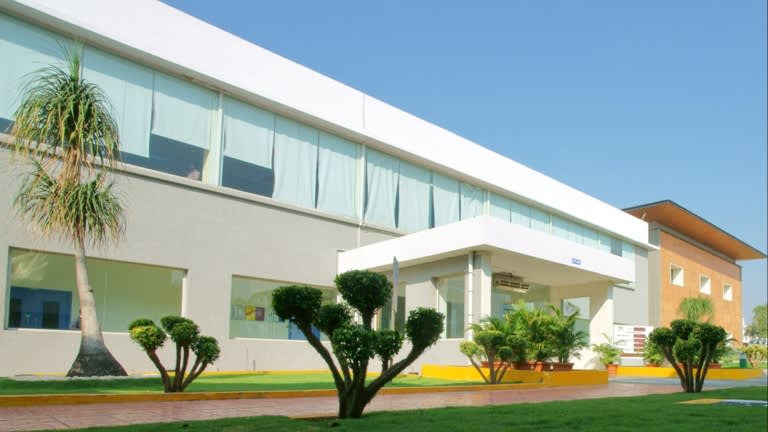 A plant of Indian drug company Biological E in the Hyderabad metropolitan area. (Photo courtesy of the company)

Canberra will contribute a fresh $77 million to assist in vaccine supply, with an emphasis on last-mile delivery support in Southeast Asia.

In India, Foreign Secretary Harsh Vardhan Shringla said after the meeting that “this is a special initiative which is designed proactively to mitigate the impact of COVID-19 among countries in the Indo-Pacific.”

The planned Critical and Emerging Technology Working Group will help Quad members coordinate on standards development, cooperate on telecommunications deployment, and diversify equipment suppliers, among other objectives, the White House said in the fact sheet.

Sullivan said the leaders agreed to have the group look into the supply chain, “including as it relates to semiconductors, to make sure that we don’t have shortages of critical materials going forward, whether it’s semiconductors or rare earths.”

The four Quad members are expected to disperse supply networks across their countries so as to rely less on China. They will cooperate on procuring rare-earth minerals, which are vital in such applications as batteries and high-performance motors. In Thursday’s briefing, the senior U.S. administration official said that all four countries have been subjected to cyberattacks and that there is a desire to “explore areas where we can improve digital hygiene, compare notes more generally, think a little bit about best global practices.”

“It is also the case that each of these countries are acutely interested in standards-setting for 5G and other global technologies that are going to be critical in the 21st century,” said the official, later adding that all Quad members believe that the period ahead is of critical importance.

Steps toward a tech decoupling from Beijing are a key legacy of the Trump administration’s confrontation with China, which has become more assertive on the global stage in recent years.

While the Biden administration is reviewing its predecessor’s tech policies regarding Chinese companies, it has made clear that it will ensure that American telecommunications networks do not use equipment from “untrusted vendors, including Huawei,” in the words of White House press secretary Jen Psaki.

In January, Japan and India signed a memorandum of understanding to strengthen cooperation in information and communications technologies including 5G, with China’s growing influence in the region’s tech infrastructure in mind.

“The deliverables from this summit are big,” said Michael Green, senior vice president for Asia and Japan chair at the Center for Strategic and International Studies, in a briefing Friday, pointing to the many subjects on the agenda.

“It’s also a smart play for Biden,” since the administration recognizes that the U.S. has lost ground in Asia, Green said.

“They needed to quickly build up a united front to deal with China on a range of issues,” he said.

But Green also noted that with such European countries as France and Germany less keen to burn bridges with China, and the Biden administration unwilling to spend its political capital on rejoining the Trans-Pacific Partnership, “the Quad was the card to play, and they played it big.”

The next focal point for Indo-Pacific politics will be the March 18 meeting between U.S. Secretary of State Antony Blinken and Chinese Politburo member Yang Jiechi in Anchorage, Alaska. While Beijing is testing the waters on dialogue with Washington for now, there are concerns that it could shift to a tougher stance if the Quad takes a hard line.