TOKYO — The Japanese justice system, which former Nissan Motor Chairman Carlos Ghosn called “rigged,” came into the spotlight again last week when an American father and son were extradited to Japan for aiding in Ghosn’s dramatic escape in 2019.

Michael Taylor and his son Peter were handed over to Japanese custody on March 1 despite their protests that they would suffer from “mental and physical torture” at the hands of the authorities. In November last year, a United Nations group raised concerns over Japan’s detention policies regarding Ghosn and the country violating his right to a fair trial.

The Taylors are incarcerated at the same Tokyo detention center where Ghosn was held. Here are five things to know about their extradition and Japan’s justice system.

How did the Taylors help Ghosn escape?

Prosecutors allege that Michael Taylor, a former Green Beret and private security specialist, together with another man, hid Ghosn in a black box designed for audio equipment. The box, which passed through airport security in Osaka without being checked, was loaded onto a private jet headed for Istanbul. From there, Ghosn fled to Beirut. Peter Taylor is accused of assisting with the escape by meeting Ghosn in Tokyo before he absconded. The father and son were paid at least $1.3 million for their services, according to prosecutors.

Ghosn is charged with underreporting his salary and aggravated breach of trust. He denies any wrongdoing, fleeing Japan while out on bail awaiting trial. Interpol has issued a wanted notice, but Lebanon has no extradition treaty with Japan and Ghosn appears unlikely to stand trial.

The Taylors, who have never denied involvement in Ghosn’s audacious escape, were arrested and held in a suburban Boston jail in May. The U.S. State Department agreed in October to hand the pair over to Japan, but a judge put the extradition on hold after they filed an emergency petition. The judge rejected the petition in January and cleared the way for the transfer.

Why were the Taylors extradited to Japan?

If convicted, the Taylors — who claimed for months that their alleged role in aiding Ghosn’s bail-jumping is not illegal in Japan — face up to three years in prison and a fine of up to 300,000 yen ($2,760). They could receive a suspended sentence and not serve time.

But experts are divided on the rationale behind the pair’s extradition to Japan. 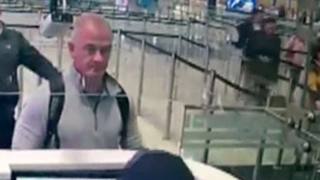 The decision was a “legal decision made by judges applying the U.S.-Japan Extradition Treaty, not a political decision,” said Stephen Givens, a Tokyo-based corporate lawyer. “The judges, through a long appeal process, concluded that the Taylors’ actions were probably illegal under Japanese law and that, in any event, a Japanese court was best placed to make that decision,” he added.

Nobuo Gohara, a former prosecutor who now runs a law firm, on the other hand, questions the extradition. “Is this really the kind of crime which needs to be tried in Japan? I doubt it,” he said. Although the Taylors could be nominally found guilty, “It must have been a political judgment by the U.S. to cooperate with Japanese prosecutors. …This was a decision made under the [Donald] Trump administration, but it was not overturned under the [Joe] Biden administration.”

Japan, which has an extradition treaty with the U.S. as well as South Korea, has taken custody of 11 suspects from abroad between 2010 and 2019, and transferred 13 suspects from Japan, according to a Justice Ministry white paper on crime. There are certain requirements that must be met before extradition can be sought, such as suspects facing more than one year’s imprisonment if convicted.

Justice Minister Yoko Kamikawa, at a news conference on March 2, declined to comment on the Taylors’ extradition, as it concerns a specific case and involves procedures in the U.S. As for Ghosn, however, she said the ministry is ready to cooperate with involved countries and institutions to ensure that Ghosn will eventually “be tried in a court in Japan.”

The Tokyo District Public Prosecutors Office also declined to comment on the latest updates on the Taylors.

Japan is often accused of imposing “hostage justice,” and the treatment of criminal suspects in the country has sparked controversy overseas. Not only can suspects be held up to 23 days without formal charges, they are rarely granted bail without a confession. Ghosn was held for 108 days at the detention center before his first bail was granted, as his detention was extended with rearrests.

Suspects can also be questioned by prosecutors for hours without a defense attorney present. Although people are presumed innocent until proven guilty under Japanese law, prosecutors have a conviction rate of more than 99%.

In their emergency petition filed in November, the Taylors argued they would be “held in conditions that would never be permitted by any U.S. court and subjected to lengthy interrogation without the presence of counsel.” Defense lawyers also cited reports that Ghosn was “interrogated day and night” without a lawyer and kept in solitary confinement in a tiny cell while in custody.

A panel of human rights experts, the U.N. Working Group on Arbitrary Detention, said in a report published the same month that Ghosn’s arrest was “arbitrary” and called on the Japanese government to “take the necessary steps to remedy the situation of Mr. Ghosn without delay.”

Japan’s justice ministry, however, counters these arguments. Decisions on detention are made “in accordance with the legal provisions stipulated in the Code of Criminal Procedure, taking into account the specific facts and circumstances of each case, thereby preventing unnecessary detention in practice,” the ministry noted on a website in late January 2020. The statement came after Ghosn blasted the country’s justice system at a news conference in Beirut, and also followed criticism about the system from The Wall Street Journal, Financial Times and other media outlets.

“The Japanese criminal justice system does not force confessions by unduly holding suspects and defendants in custody, so it is not accurate at all to accuse the Japanese system of being a ‘hostage justice’ system,” the website continued, adding that Japan’s high conviction rate is mainly because prosecutors indict only if there is a high probability of obtaining a conviction.

How does the extradition of the Taylors move Ghosn’s case forward?

Many observers believe the handover of the American suspects to Japanese authorities will not change the handling of the Ghosn case much. “While Japanese prosecutors might be able to prove Ghosn’s escape, not much will be newly revealed, as the Taylors are unlikely to confess the details,” said Gohara. “Ghosn himself is gone, so it would be unfair to try them without the key figure.”

Greg Kelly, Nissan’s former representative director who was arrested with Ghosn in November 2018 for alleged financial misconduct, is still being tried in Japan. The question of whether Kelly conspired to underreport Ghosn’s compensation will be determined in court. But his case is “by no means an easy win for the prosecutors. …Convicting the Taylors in a relatively simple case may create room for a “soft landing” for the much weaker case against Kelly,” said Givens. Kelly maintains his innocence.

What is Ghosn doing now?

Ghosn, who has French, Lebanese and Brazilian citizenship, has remained in Lebanon, his childhood home, with his wife since his escape.

Credited with saving Nissan from the brink of bankruptcy and leading the automaker for two decades, Ghosn announced in September that he plans to launch a business program at a Lebanese university. In an interview with CNBC in November, the Brazilian-born tycoon said he was surprised the U.S. agreed to extradite Michael and Peter Taylor to Japanese authorities.