M.Tech, a precision component processor in the city of Hitachinaka in Ibaraki Prefecture, northeast of Tokyo, hired two male Myanmar workers in January. One of them, Ye Minn Nyein, 25, who has previously worked with Japanese people, said of his experience so far: “My neighbors here are friendly, as they always say hello to me. They also follow the rules.”

M.Tech is a core member of the Guild for Leading Innovative Technology formed by 11 manufacturing companies in the prefecture to jointly win orders. In 2018, it and fellow members held a joint session to interview Myanmar workers and hired two women. M.Tech conducted another session with five other Ibaraki-based companies in December 2019. In January this year, a total of 13 workers from Myanmar, hired by six companies, arrived in Japan after being delayed from August 2020 due to issues related to the coronavirus pandemic.

Otsuka Factory, a maker of jigs and labor-saving equipment in Mito, has employed two Myanmar women. “I am gradually getting used to my work. I have no problems because people around me are kind,” said one of them, Nway Ei Hlaine, 25.

Tadahiro Negishi, Otsuka’s senior managing director, said the two female Myanmar workers “are catching on quickly as they learned Japanese and business manners for a year before coming to Japan.”

Indeed, the prefectural government of Ibaraki in Japan says the Southeast Asian nation is now a key source of labor for local companies. 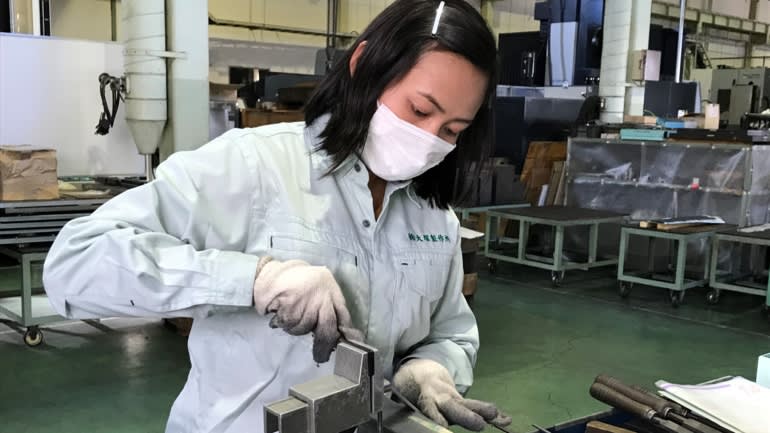 Nway Ei Hlaine, a worker from Myanmar, smoothing the surface of metal at Otsuka Factory in Japan. (Photo by Yukihiro Takefuta)

However, Myanmar’s military staged a coup d’etat in early February this year and have detained Aung San Suu Kyi.

Nway Ei Hlaine of Otsuka said, “I am worried about friends of mine in Yangon. The military should stop arresting citizens for no reason.”

The two workers have managed to get in touch with their families and friends via social networking services.

Their employers were also surprised by the coup. “We can do nothing but to collect information,” Otsuka’s Negishi said.

Many GLIT members intend to keep hiring competent workers from abroad, while keeping an eye on the political situation in the relevant countries.

There are many Vietnamese and Chinese people working as trainees in Japan. Although the number of Myanmar workers is still small, GLIT member companies are pinning high hopes on them as candidates for long-term employment in their businesses.

“[Many] Vietnamese and Chinese trainees return home after three to five years,” said Toru Matsuki, president of M.Tech. “We need competent people because they can work with us while learning from us.”

Matsuki visited Myanmar in 2017 and recognized the availability of able young people there. M.Tech thus began to recruit Myanmar workers in conjunction with local companies who shared its view about the potential of foreign workers.

Matsuki plans to hold a joint ceremony to welcome new workers to GLIT member companies in March or April, as part of a welfare drive to help smooth communication with foreign workers who can tend to get isolated in Japan.