TOKYO — On Feb. 19, a Russian icebreaker that transports liquefied natural gas arrived at Sabetta, an LNG loading port in the far north of Siberia. The ship had sailed through the ice-covered Arctic Ocean on its way to and back from China’s Jiangsu Province.

The journey is noteworthy because the Arctic Sea route that the ship took is usually only navigable from July to November, when the sea ice is thin.

It was the first time for a ship to successfully navigate the Arctic Sea route to Asia in the dead of winter.

Japanese companies took note. JGC Holdings has built an LNG plant near the port, to and from which Mitsui O.S.K. Lines partially handles transportation. Trading house Mitsui & Co. and other parties have invested in the second phase of the LNG project, which is to be completed around 2023. Once a year-round shipping route is established, transportation time between Russia and Japan will be greatly reduced.

Global warming is something of a boon for Russia, where 55% to 65% of the country is covered in permafrost. It is estimated that 60% of the country’s oil and 90% of its natural gas, as well as deposits of nonferrous metals and gold, lie under this thawing part of the planet.

President Vladimir Putin once shrugged off the perils of global warming, saying, “an increase of two or three degrees wouldn’t be so bad for a northern country like Russia. We could spend less on fur coats, and the grain harvest would go up.”

That was at least partially prophetic. According to Russia’s Federal State Statistics Service, grain production in 2020 was up 9.7% from the previous year, the second highest level after 2017. The amount of land under cultivation is also increasing.

But those shrugged-off perils are beginning to overshadow the bumper harvests.

In the Republic of Sakha in far eastern Siberia, the temperature is minus 50 C, yet white smoke rises from the snow-covered ground. In January, local media released an amazing image of a peat fire in the ground under the snow.

Roughly 140,000 sq. km of Russia, about the size of Greece, was lost to fire in 2020. Most of that was in once-frozen areas. When covered with snow in winter, the fires seem to be extinguished. However, the peat in the ground continues to smolder, and in summer it ignites on the surface. They’re being called zombie fires and are believed to be caused by global warming.

There are concerns that the zombies will rage again this year.

Peat fires emit large amounts of carbon dioxide. A record 244 million tons of CO2 equivalents were released by fires near the Arctic Circle, mainly in Russia, in the 12 months through last August, according to the British journal Nature. That is 35% more than a year earlier and equal to 21% of Japan’s total emissions in 2017.

In Siberia, plants and other organisms that have been decomposing for more than 10,000 years are trapped in the soil as CO2 and methane gas. These gases are released by fires and other events, further accelerating global warming. The world’s permafrost zones are thought to contain twice the amount of carbon that is in the atmosphere. 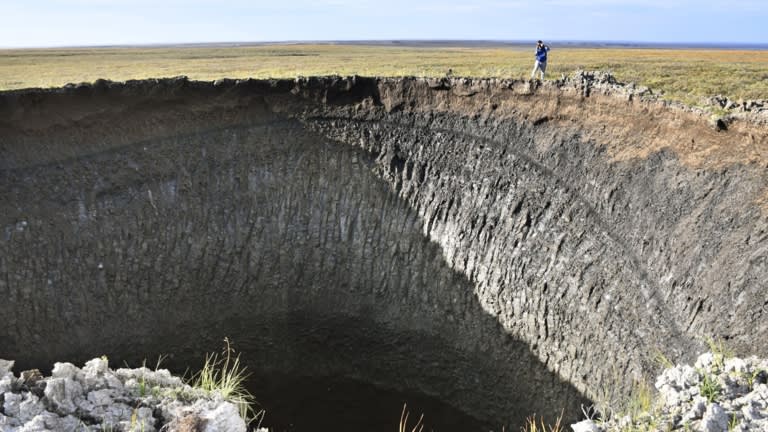 The Yamal Peninsula in the Russian Arctic in summer 2020. Seventeen of these holes have been discovered since 2014. (Kyodo photo/courtesy of Russian researchers)

There is another phenomenon that illustrates the seriousness of the situation.

Last summer a craterlike hole with a diameter of 20 meters and depth of 30 meters was discovered in the permafrost zone of northwestern Siberia. It is the 17th such hole to be discovered since 2014. The working hypothesis is that the craters are the result of explosions of accumulated methane gas in the thawing permafrost. The blasts are able to blow away frozen soil that had been contained by ice.

This might be fine so long as no one is living in these locations. But in May 2020, a fuel tank at a power plant on the outskirts of the city of Norilsk in central Siberia collapsed, spilling diesel fuel into a nearby river. It caused such serious environmental damage that Putin declared a state of emergency.

The operating company concluded that the collapse occurred because the ground loosened as the permafrost thawed. It has been reported that one-fifth of the infrastructure in the frozen zone, including oil and gas facilities as well as railroads, will be affected by 2050.

In 2016, western Siberia experienced a different kind of crisis, an anthrax outbreak. One boy and over 2,000 reindeer died. The source of the bacterial infections was the melted corpse of a reindeer that had been frozen for more than 75 years. Some scientists have warned of the possibility of more dormant pathogens reactivating.

Russia ratified the Paris Agreement in September 2019. The base year for reducing greenhouse gas emissions is 1990, just before the collapse of the Soviet Union. Since its emissions have declined rapidly since then, Russia has already met its short-term target.

Although it was supposed to be a global warming “winner,” Russia has become an unexpected climate change victim.

The anomalies in Siberia are a wake-up call from Mother Earth. It is time for all of humanity to listen, and for all of us to pool our collective wisdom to address this problem.