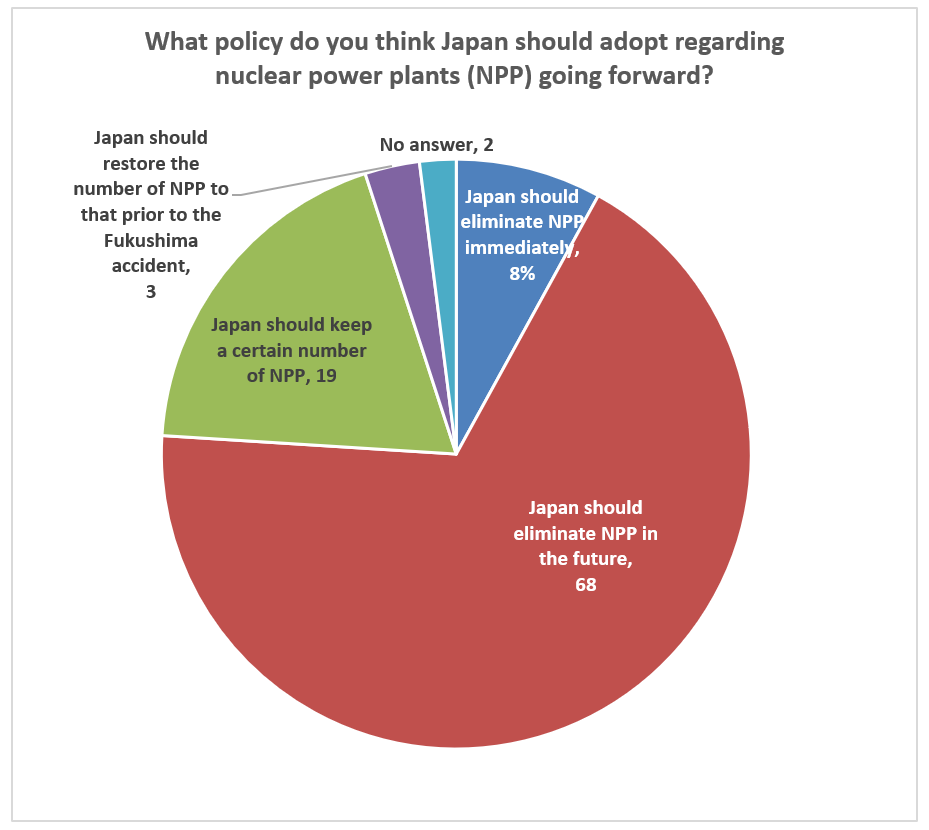 The poll revealed the reality that the TEPCO Fukushima Daiichi nuclear power plant accident continues to exert a strong impact on public opinion. The Fukushima accident, where three reactors suffered a meltdown, is among the world’s worst nuclear accidents. The total percentage of respondents who said either that Japan should eliminate nuclear power in the future or should eliminate it immediately remained high, in line with past polls. Some 69% of respondents gave one of those answers in the 2014 poll, 62% in the 2016 poll, and 75% in the 2018 poll.

Prime Minister Yoshihide Suga has pledged that Japan will achieve net zero greenhouse gas emissions by 2050. Asked what means Japan should use to achieve that goal, 50% said “only renewable energy and new technologies should be used,” while 44% said “nuclear power should be used to make up for any shortfall in reaching the goal.”

[Polling methodology: A total of 3,000 men and women aged 18 or over were randomly selected nationwide from 250 locations on a stratified two-stage random-sampling basis to create a cross-section of Japan’s slightly more than 100 million voters. On Jan. 14, 2021, questionnaires were sent out by postal mail, and 2,048 completed questionnaires had been returned as of Feb. 22. Valid responses were received from 1,970 people, excluding questionnaires completed improperly or by persons other than the intended voter. The valid response rate was 65.7%. The makeup of the polling sample was as follows: male, 48.1%; female, 51.9%. Sections of Fukushima Prefecture heavily impacted by the 2011 Great East Japan Earthquake were excluded from the survey pool.]