Sri Lankan woman dies in detention, wrote about her hunger 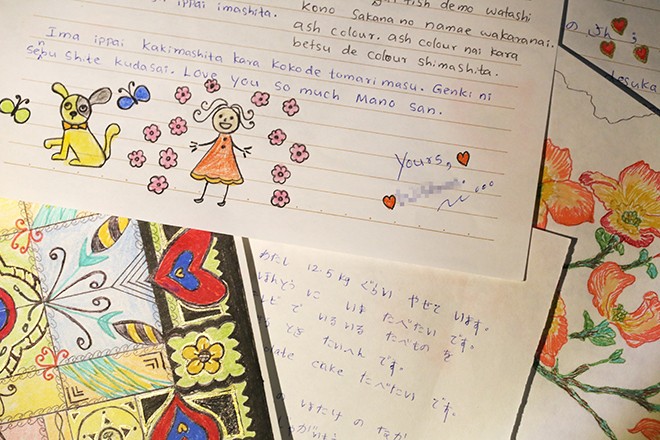 Letters and illustrations written and drawn by a Sri Lankan woman who died of emaciation on March 6 at a detention facility with the Immigration Services Agency of Japan’s Nagoya Regional Immigration Bureau. Parts of the images were modified. (Rei Kishitsu)

NAGOYA–A 33-year-old Sri Lankan woman being detained by immigration authorities here died of emaciation on March 6, after requesting provisional release and expressing a desperate desire for food in notes and letters.

“I truly want to eat now,” she wrote in hiragana in a note while under detention at a facility operated by the Immigration Services Agency of Japan’s Nagoya Regional Immigration Bureau.

The facility houses foreigners who have overstayed their visas.

According to a group supporting foreigners, START, the woman became unable to eat and walk due to the extreme stress and deteriorating health she suffered while under custody.

The woman’s health condition was so dire, she brought a bucket to vomit in if needing to do so when START members visited her at the facility, according to the group.

A copy of a document submitted to immigration authorities in December showed that she was requesting provisional release as immigration officials denied her access to medical care.

“I want to go to a hospital to receive an intravenous drip, but immigration authorities would not take me,” she said in the document.

In response to the woman’s death, Justice Minister Yoko Kamikawa, who has oversight of the agency, said on March 9 that the ministry is investigating the case.

“She reportedly saw doctors at an agency clinic and an outside hospital,” she said. “We are trying to confirm the facts, including the cause of her death.”