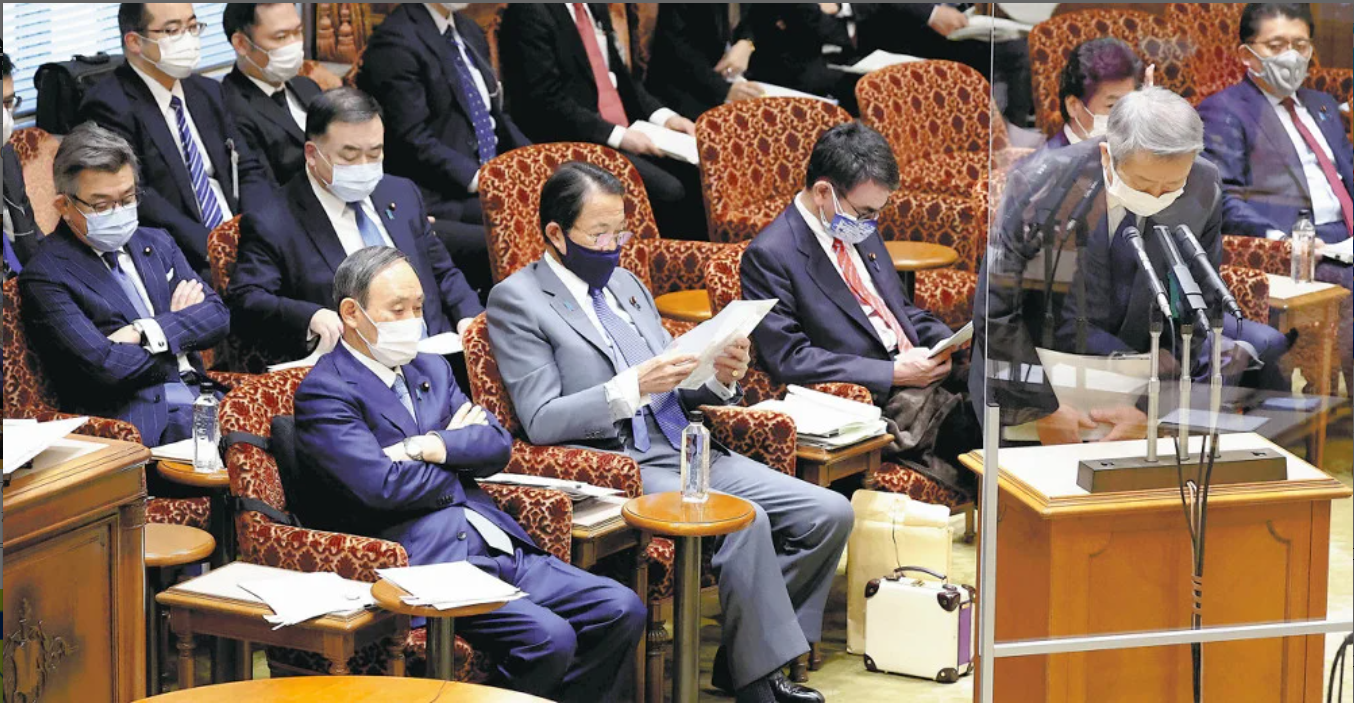 NTT President Jun Sawada (second from right) apologizes at the budget committee meeting of the House of Councillors at the National Diet Building on the morning of March 15, 2021. Prime Minister Yoshihide Suga is in the front row at the far left and Communications Minister Ryota Takeda is in the second row at the far left. (Photo by Masanori Genko)

The following is the gist of interpellations at the budget committee meeting of the House of Councillors on March 15, 2021:

Prime Minister Yoshihide Suga: The number of new coronavirus cases has stopped rising recently. We’ll make a final decision after seeking experts’ opinions on how to assess various figures. We’re still not in a situation where we can say [whether we should extend the emergency or lift it.]

Chair of the government’s expert panel on coronavirus measures Shigeru Omi: The government should refrain from making a decision [on whether to lift or extend the emergency] without carrying out a thorough examination on why new infection cases have stopped increasing.

Suga: Relevant ministries and agencies are currently examining the plan [to release treated water into the ocean]. I will address the issue responsibly at an appropriate time as the head of the government.

Daisaku Hiraki (Komeito): Coordination is underway for the prime minister to travel to the U.S. next month.

What kind of a Japan-U.S. relationship will you build with President Joe Biden?

Suga: The Japan-U.S. alliance is the cornerstone of [Japan’s] foreign and security policies. It will form the basis

of peace and stability in the Indo-Pacific region. We also have an important responsibility to address

global challenges. I want to cooperate with the U.S. in spearheading the creation of post-COVID-19 rules and

tackling climate change. I will discuss these issues in person with President Biden.

Hiraki: China Coast Guard ships are repeatedly intruding into Japanese territorial waters near the Senkaku Islands. To rectify the situation, I would like to see this issue discussed at the Japan-U.S. 2+2 (Japan-U.S. Security Consultative Committee) meeting on March 16.

Minister of Foreign Affairs Toshimitsu Motegi: [The 2+2 meeting] is a good opportunity to showcase to Japanese and overseas audiences the unwavering bonds between Japan and the U.S. We will discuss the regional security environment, including the issue of China.

Side effects of COVID-19 vaccinations

Minister of Health, Labour and Welfare Norihisa Tamura: We received reports on 17 instances [of anaphylaxis] as of March 9, but in fact only seven of them were found to be true. A health ministry council will make a decision after receiving a wide range of reports. (Abridged)