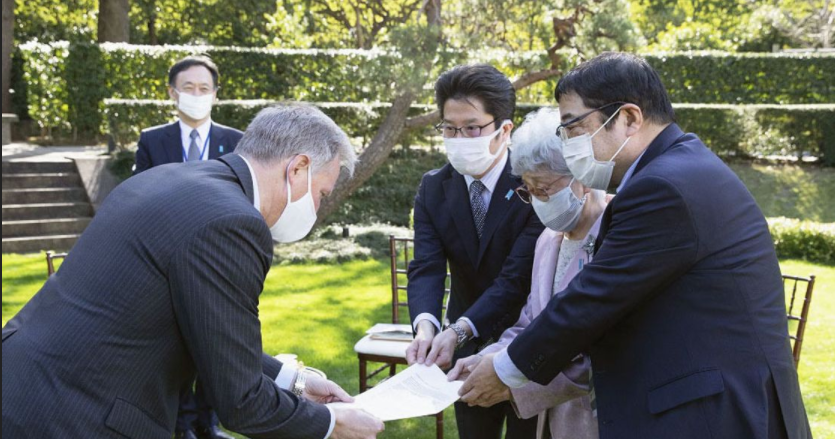 Sakie Yokota (R, C), mother of Megumi Yokota, one of the Japanese nationals abducted by North Korea, and others submit a request for U.S. assistance in resolving the North Korean abduction issue in a meeting with Joseph Young (L), charge d’affaires ad interim at the U.S Embassy in Tokyo on March 15, 2021. (Photo courtesy of the U.S. Embassy) (Kyodo)

Family members of Japanese nationals abducted by North Korea in the 1970s and 1980s on Monday requested that U.S. President Joe Biden’s administration focus on resolving the long-standing abduction issue.

Sakie Yokota, 85, mother of then 13-year-old Megumi Yokota, who was kidnapped on her way home from school, and her younger brother Takuya, 52, filed the request addressed to U.S. Secretary of State Antony Blinken in a meeting with Joseph Young, charge d’affaires ad interim at the U.S. Embassy in Tokyo.
It marked the first time that relatives of abduction victims had met with a senior U.S. official since Biden took office in January.
The meeting took place a day before the foreign and defense ministers of Japan and the United States hold security talks in the Japanese capital at which North Korea and other regional issues are on the agenda.
“We requested the Biden administration focus on resolving the abduction issue,” just as previous U.S. administrations did, Takuya Yokota, who serves as secretary general of a group of the victims’ families, told reporters.
Tsutomu Nishioka, chairman of an advocacy group for the abductees, joined the Yokotas in handing Young a letter asking the new U.S. administration to “continue closely cooperating with the Japanese government in striving to realize the swift repatriation of all abduction victims.”
Japan officially lists 17 people as having been abducted by North Korea with five already repatriated. But Pyongyang maintains that eight died, including Megumi Yokota, and that the other four never entered the country.
Later, Sakie Yokota told reporters at the Cabinet Office that she wants her daughter and other abductees to be able to “step on Japanese soil” again.

Nishioka said he would like the United States to support Prime Minister Yoshihide Suga’s efforts to meet with North Korean leader Kim Jong Un without conditions.