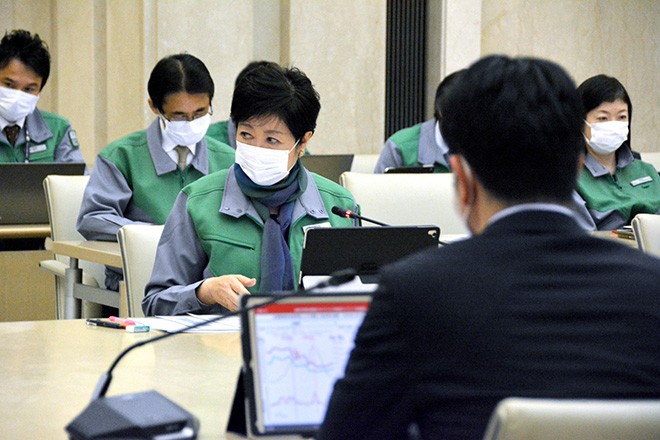 Tokyo Governor Yuriko Koike attends a meeting of a panel of experts dealing with the novel coronavirus pandemic. (Momoko Ikegami)

Tokyo residents have entered a phase of COVID-19 fatigue and are letting their guard down during the extended state of emergency, metropolitan government officials warn.

Statistics on the virus situation in the capital support their concerns.

“More than two months have passed since we have been screaming, ‘State of emergency!’” a high-ranking official with the metropolitan government said. “People may be relaxing somewhat because the current situation has become the new normal. There are no signs the number of new cases is declining.”

Even Tokyo Governor Yuriko Koike acknowledged on March 14 that the virus numbers have slightly increased after a decline.

March 15 marked the seventh straight day when the daily figure for new COVID-19 cases in the capital was higher than the number for the same day of the previous week.

For the week ending March 15, the daily average was 287.6, a 13.5-percent increase over the previous week. It was the first time after February for the week-on-week average to rise by more than 10 percent.

There are other signs Tokyo residents are no longer heeding requests from the metropolitan government to take measures to prevent infections.

For the week until March 8, the ratio of infection routes tied to get-togethers and parties among friends and colleagues jumped to 4.5 percent from the 3.8 percent of the previous week.

At a March 12 meeting of the metropolitan government’s panel of experts, one member pointed out, “There has been an increase in foot traffic at some major entertainment areas in comparison to when the state of emergency was issued on Jan. 8.”

And the trend is not limited to salaried employees working for companies in the capital’s Shinbashi district.

On March 13, the Tokyo Metropolitan Bokutoh Hospital announced that five staff members, including doctors and nurses, tested positive for the novel coronavirus.

The five gathered on March 4 at an “izakaya” Japanese-style pub near the hospital for food and drinks. They then went to the home of a doctor for more drinks. None of the staff members wore a face mask during the extended session, according to the hospital.

At the peak on Jan. 7, 14.5 percent of tests came back positive. The indicator is one sign of the extent of community infections.

While the figure dropped to 3.9 percent on Feb. 19, it has remained stuck at the 3-percent level for about three weeks.

However, there are signs that the health care situation in Tokyo has improved.

One goal among metropolitan government officials is to lower the figures of the six benchmarks used to evaluate the pace of new infections. The benchmarks are classified under a four-level system, with the most serious stage 4 indicating an “explosive” growth in infections.

The metropolitan government’s panel of experts has set the goal of reducing the benchmarks to stage 2 by March 21, the current deadline for the state of emergency for Tokyo and three neighboring prefectures.

As of March 15, a total of 2,628 patients were resting and recuperating from COVID-19. The figure is much higher than 2,088, the cutoff point for stage 2 in that benchmark.

But the number of hospitalized patients—1,270—is close to the 1,261 for stage 2. And the figure for COVID-19 patients with serious symptoms has dipped under the 255 number for stage 2 and now stands at 251.

However, the panel meeting on March 12 pointed out that the pace at which the number of hospitalized patients is declining has slowed.

Members noted that the figure has been at a high level since early January, meaning there has been an extensive effect on providing medical care for illnesses besides COVID-19.

The infection trends in the three neighboring prefectures of Kanagawa, Saitama and Chiba have led to differing views about whether the state of emergency should end as scheduled on March 21.

For the week ending March 14, Kanagawa and Chiba recorded a decline in new COVID-19 cases over the previous week, but the figure increased in Saitama.

And while the hospital bed usage ratio for Saitama and Chiba has moved out of the stage 4 level, the figures are still around 40 percent. Kanagawa is approaching the stage 2 level of under 20 percent, with its current ratio at 25 percent.

Saitama Governor Motohiro Ono raised doubts about asking for a lifting of the state of emergency, saying there were signs of a rebound in new infections.

However, Kanagawa Governor Yuji Kuroiwa said he was inclined to have the state of emergency lifted, pointing out that the infection situation had eased in recent days in his prefecture.