TOKYO — Japan and the U.S. on Tuesday expressed “serious concerns” over a Chinese law that allows the nation’s coast guard to fire at foreign ships in waters around the Japanese-administered Senkaku Islands, which Beijing claims as the Diaoyu.

The allies agreed to deepen defense cooperation and hold joint military drills in the area around the islands in the East China Sea amid an upsurge in Chinese incursions into Japanese waters near the islets.

“Yesterday in the East China Sea, the Air Self-Defense Force and U.S. forces conducted joint exercises, and also in the south western [maritime] area, many joint exercises have been conducted,” Kishi told reporters at a joint press conference. “And we will with certainty, steadfastly conduct such joint exercises and demonstrate to the general public that Japan and the U.S. are acting together.”

Official Chinese vessels entered waters surrounding the Japan-administered Senkakus on six separate days in February — the most in four and a half years.

China last month upgraded its coast guard to quasi-military status, allowing it to fire at foreign ships in its waters. Amid concerns that Beijing could further step up activities near the islands, Japanese government officials have said the Japan Coast Guard may be able to directly shoot at foreign targets caught committing violent crimes on their way to landing on Japanese territory.

The United Nations Convention on the Law of the Sea permits “necessary steps” to prevent the passage of ships that threaten their peace and security. Japan believes this to include the use of weapons by its coast guard in response to an attack by foreign ships, based on its law permitting authorities to shoot in self-defense.

The ministers said in a statement”: The United States and Japan remain opposed to any unilateral action that seeks to change the status quo or to undermine Japan’s administration of these islands.”

Robert Dujarric, co-director of the Institute of Contemporary Asian Studies at Temple University Japan Campus, told Nikkei Asia that Japan has to date been “very passive” and has not resorted to force to expel the Chinese vessels.

“Tokyo thinks that risking a clash over the uninhabited islands is not logical. This is based on the assumption that Chinese actions will not escalate into more aggressive moves, such as capturing Japanese fishing vessels and landing on the islands,” he said.

“Washington believes that if Japan responds there’s a risk it will escalate into a kinetic clash that could morph into a Sino-American war. Washington thinks it’s better to have minor violations of Japanese sovereignty than an armed conflict. It has thus suggested that Tokyo does not respond. 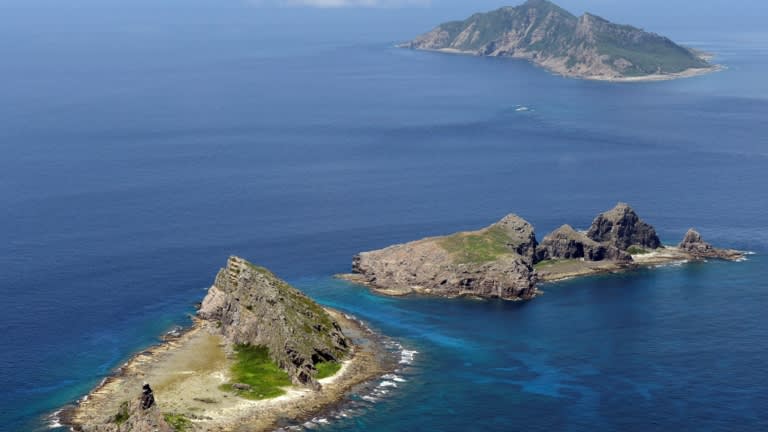 The Senkaku Islands, or Diaoyu in Chinese, are seen in the East China Sea   © Reuters

“We are united in the vision of a free and open Indo Pacific region, where countries follow the rules, cooperate, whenever they can, and resolve their differences peacefully, and in particular we will push back if necessary when China uses coercion or aggression to get its way.”

Motegi said: “We agreed that China’s actions that do not conform to the existing international order pose various challenges to the Japan-U.S. alliance and the international community.”

The statement included the line: “The Ministers underscored the importance of peace and stability in the Taiwan Strait.”

Austin said that China was a “pacing threat” — a reference to a competitor making significant progress toward challenging the U.S.

Similar talks will be held in South Korea on Wednesday. Austin also plans to visit India after his trip to Tokyo and Seoul.

Blinken is set to meet with top Chinese diplomat Yang Jiechi and Foreign Minister Wang Yi in Alaska on Thursday. The U.S. is aiming to restrain China by having the meeting after emphasizing cooperation with allies.

The Japan-U.S. two-plus-two dialogue has been held from time to time when the two countries feel the need to cooperate on changing international situations. This last meeting was in the U.S. in 2019 and focused on cybersecurity issues.

It is the first time in seven and a half years for the meeting to be held in Japan. Motegi said there will another round of two-plus-two talks later this year.

“I look forward to making the Japan-U.S. alliance more solid,” he said.