TOKYO — Organizers of the Tokyo Olympics are to soon reach a decision on whether to allow overseas spectators to attend the Games and are set to start the torch relay on March 25. But they are still struggling to gain the support of the Japanese public as a national coronavirus vaccination program lags behind those of other advanced countries.

On March 12, demonstrators stood in front of the headquarters of Tokyo 2020 — as the Games are still called — with banners and placards reading: “Cancel the Olympics!” Their chants echoed through the streets as passersby looked on.

“I don’t understand why athletes can get so many PCR [COVID-19] tests while many Japanese can’t,” demonstrator Keiko Nakamori told Nikkei Asia. “Hosting the Games is only meaningful for organizers and they are not looking at the people.”

Protesters are far from alone in their concerns. A March survey by U.S.-based communications consultancy Kekst CNC found that 56% of respondents in Japan opposed having the Games go ahead this year. Of the six countries surveyed, including the U.S. and the U.K., opposition in Japan was highest.

Another survey conducted by Nikkei in February found that nearly half (46%) of respondents think the Games should be canceled, while 36% think they should be postponed again. 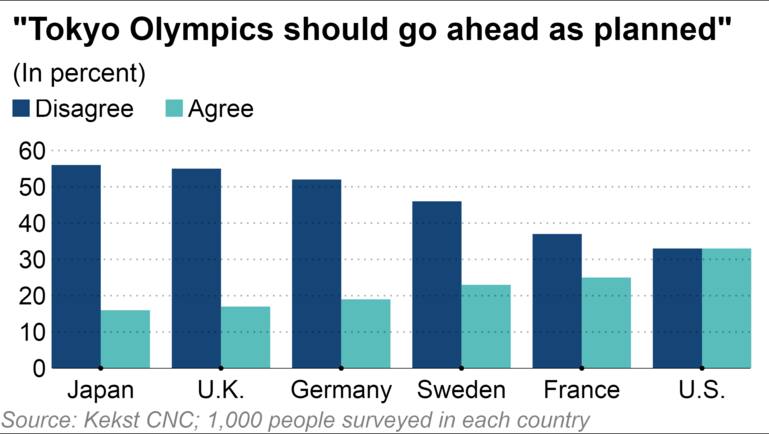 The Olympics have also failed to win over skeptical doctors. A December survey by M3, a Tokyo-based medical data service provider, found that around 40% of them think it is impossible to hold the Games this year. Organizers estimate that they will require the services of up to 300 physicians a day during the event, 100 of whom will be tasked with implementing coronavirus safety protocols.

“It’s unbelievable that organizers are pushing the Games, which can further spread the virus amid the pandemic,” Sachihiro Ochi, a medical worker, told Nikkei. According to the survey, over 40% of doctors believe widespread vaccination will be necessary for the Olympics to be staged.

It remains unclear when citizens can get inoculated. Japan started vaccinating medical workers in February, and plans to begin doing so for the elderly in April. But it is lagging behind other developed countries. Organizers have been trying to address these concerns. Last month, the International Olympic Committee published the first draft of the “playbook” which lays out rules for spectators and people involved in the events, including “no chanting or cheering.” But the publication is little known among Japanese citizens.

When Tokyo won the right to host the Games in 2013, 70% of Tokyo residents backed it, according to the IOC. That high level of public support was one reason Tokyo won the bid. It also helped Tokyo organizers collect a record $3.3 billion from domestic sponsors.

But enthusiasm has cooled considerably over the past year as people saw how organizers and the government have handled the Olympics amid the pandemic, said Taisuke Matsumoto, a lawyer and associate professor at Waseda University in Tokyo.

“Organizers didn’t have discussions with the public. All they did was keep saying that they would absolutely hold the Games,” Matsumoto told Nikkei. “As a result, a sense of insecurity grew among the Japanese people.”

Matsumoto explained that the Host City Contract stipulates it is the IOC that calls the shots and if an organizing committee or host city decides on an important matter such as cancellation, that will mean a unilateral cancellation of a contract and thus they have to bear the losses that the IOC could incur. To many, it seems as if there is no room to question whether the Tokyo Olympics should go ahead. Without waiting until the end of a coronavirus state of emergency recently extended in the capital region, organizers said in a Monday statement that the torch relay would start on March 25 as planned. The event is being interpreted as a message that the Games will be held irrespective of the COVID situation.

Tokyo 2020 President Seiko Hashimoto recognizes that declining public support for the Olympics stems from people’s worries about hosting the events in the middle of a pandemic. “People are anxious that it will be difficult if infections do not decrease even if thorough virus countermeasures are taken,” said Hashimoto.

The Olympics are ostensibly apolitical, but their significance is not lost on Prime Minister Yoshihide Suga’s government, which is suffering from falling poll numbers.

Political scientist Lully Miura argues the benefits of holding the Tokyo Olympics outweigh the cost of canceling them for Suga. “If the government succeeds in hosting the Games safely, that achievement can ultimately win people’s support back,” said Miura, adding that most of the opponents have vague concerns and are likely to be positively swayed by the atmosphere of the Games. This is especially important as elections for the lower house of parliament will be held this year.

On top of banning overseas spectators, some think even domestic spectators should also not be allowed. “Holding the Games this year without spectators is the best option,” said a Tokyo 2020 ticket holder for a volleyball match.

“People are overly worried about the risks of the disease,” Miura said. “The administration is trying to figure out how to keep the desire for a zero-risk situation from becoming a political movement.”