Secretary Blinken says he plans to share “concerns” with China 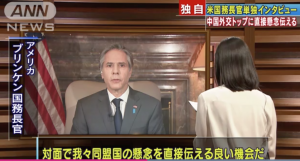 TV Asahi reported at noon on its one-on-one virtual interview with visiting Secretary of State Blinken conducted earlier in the day. When asked what he will demand of China when he meets with top Chinese officials in Alaska on March 18, the Secretary was shown saying: “That’s an opportunity for us to, very directly, face to face, share with our Chinese counterparts the concerns that the United States has, that our allies and partners have, about some of the things that China is doing. I suspect it will be an opportunity for China to share whatever concerns it has about us.” TV Asahi said the Secretary emphasized that the meeting will be a good opportunity for both the U.S. and China. The network added that he explained that he made Japan the destination of his first overseas trip as secretary of state to demonstrate that the U.S. values its alliance with Japan.