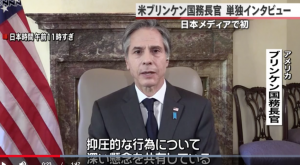 NTV reported at noon on its one-on-one virtual interview with visiting Secretary of State Blinken, saying that the Secretary stressed that the United States and Japan should work in solidarity to counter the threat posed by China. He was shown saying: “I think both the United States and Japan share a deep concern about what we’ve seen in recent years which is China acting more repressively at home and more aggressively abroad, including particularly in the region whether it regards to the Senkaku Islands or Taiwan, the South China Sea. Based on my conversations here in Tokyo, that clearly is a real concern to both of us. It’s important that we work in solidarity to deal with some of the challenges posed by China and I’m confident that we will do that.” The network noted that Secretary Blinken and Secretary of Defense Austin chose Japan for their first overseas trip and that the Secretary has been wearing a blue ribbon badge representing the wish to bring home the Japanese citizens abducted by North Korea. The network said the Secretary disclosed that he received a letter from the families of the Japanese abductees and said it was “very powerful and moving” and added that the U.S. is highly conscious of the issue. Secretary Blinken also reportedly said he would like to raise the abduction issue when he has a chance to hold talks with North Korea.