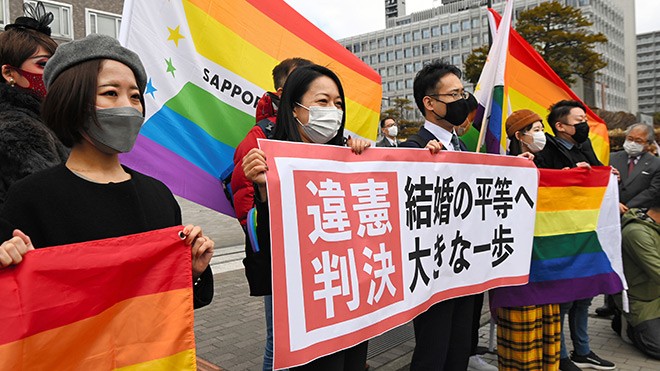 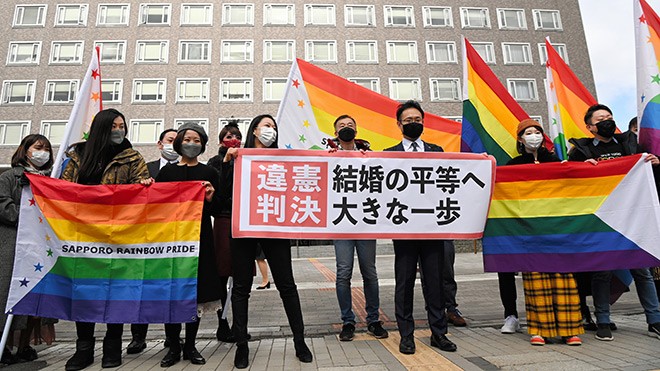 SAPPORO–In a landmark decision, the Sapporo District Court on March 17 ruled that the government’s refusal to recognize same-sex marriages is unconstitutional and discriminatory against gay people.

“Sexual orientation is not something that a person can choose and change at their own will,” Presiding Judge Tomoko Takebe said in the ruling. “It is discriminatory treatment that gay people are being denied even part of the legal benefits resulting from marriage, and it goes beyond legislative discretionary powers.”

Takebe said that denying same-sex marriages violates Article 14 of the Constitution that guarantees equality for all.

The plaintiffs–two male couples and one female couple who are all residents of Hokkaido–filed the lawsuit in February 2019 in concert with legal action taken by other same-sex couples nationwide. They have argued that the Civil Code and the Census Registration Law that deny same-sex marriages are unconstitutional.

Currently, 28 plaintiffs have filed lawsuits. Trials have started at five district courts, including in Tokyo and Osaka. But the Sapporo court was the first to hand down a ruling.

The Hokkaido couples filed marriage papers, but their marriages were deemed “illegal.” They then sued the government, arguing that denying same-sex marriages violates “marital freedom” and the “principle of equality” guaranteed by the Constitution.

Although the district court’s ruling raised cheers among proponents of same-sex marriages, it was not a total victory for the plaintiffs.

The court rejected their demands for 1 million yen ($9,160) in compensation per plaintiff.

The judge also dismissed the plaintiffs’ claim that Diet members should be held responsible for failing to take action to legalize same-sex marriages.

“It was not easy for the Diet to promptly recognize the unconstitutionality (of denying same-sex marriages),” Takebe said.

The plaintiffs also argued that Article 24 of the Constitution, which says a marriage is consummated only under agreement by members of both sexes, does not ban same-sex marriages and instead guarantees marital freedom to every person who desires to marry.

Treating opposite-sex marriages and same-sex marriages differently is unjustifiable discrimination and a violation of both Article 14 and Article 13, which guarantees the right to the pursuit of happiness, they said.

The court, however, did not find the government’s denial of same-sex marriages violated Article 24 and Article 13.

The central government asked the court to dismiss the lawsuit, arguing that “both sexes” mentioned in Article 24 mean a man and a woman.

“The Constitution does not assume same-sex marriages,” the defendant in the lawsuit stated.

The government side emphasized that the purpose of the marriage system is to provide legal protection to a relationship of a husband and a wife who live together and give birth to and rear babies.

Therefore, denying same-sex marriages is not discriminatory, the defendant said.