‘Love can only do so much.’ Gay couple moved to tears after ruling 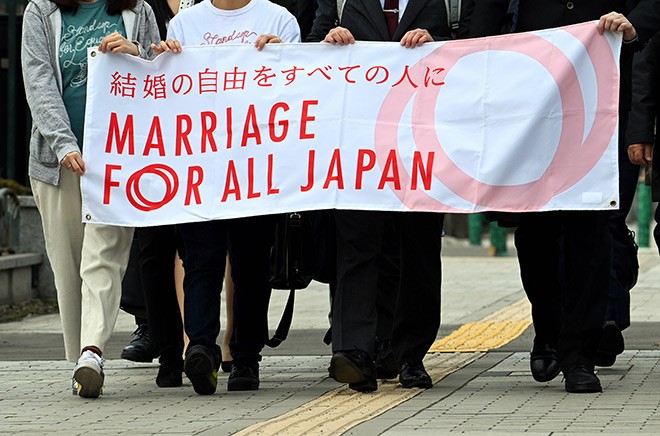 Plaintiffs in a same-sex marriages lawsuit head toward the Sapporo District Court on March 17 in Hokkaido. (Kengo Hiyoshi)

For 18 long years, Ryosuke Kunimi has prayed for the day when he can live together with his loved one as a legal family.

He said he feels he has taken a step closer to that day with a landmark court ruling on March 17.

“I can’t stop crying,” said Kunimi, a public school teacher in his 40s in Obihiro, Hokkaido. “The judge minced no words and said it is discrimination.”

His partner of 18 years, Takashi (a pseudonym), a company employee also in his 40s, said of the ruling: “It was an emotional moment. I will never forget the sight for the rest of my life.”

The two were plaintiffs in the lawsuit at the Sapporo District Court, which ruled that the government’s refusal to recognize same-sex marriages was unconstitutional and discriminatory.

In court, they explained their lives together. For example, they share the housework, but Takashi takes care of the cooking because of his culinary skills.

They also provided a picture as evidence that they were indeed a “family.”

The photo was taken when they were on vacation at an onsen hot spring with Takashi’s parents in 2018.

Kunimi gives peace signs with both hands, while Takashi flashes a smile that exposes his teeth a bit. Takashi’s parents and his sister’s family surround the couple in a relaxed mood.

A hotel staff member who was asked to take the picture immediately said, “Oh, it’s a great picture.”

Takashi said the moment was special. “I was very happy that we were recognized as a family.”

But the government does not recognize same-sex marriages. And that lack of legal recognition has weighed heavily on their minds, particularly with the novel coronavirus pandemic continuing to rage.

Many hospitals have restricted visitations, making it harder for unrelated people to see patients. The couple were worried about what to do if something happened to one of them that required hospitalization.

“When I decided I will spend the rest of my life with Takashi, I realized that love can only do so much,” Kunimi said.

They knew that so many of their problems and concerns would be resolved if Japan would legalize gay marriages.

During a judicial inquiry in August 2020, Kunimi said he wanted to continue to live together with Takashi, describing him as “family.”

“Please let us marry each other,” Kunimi told the court. “I want nothing else.”

Kunimi said another reason they joined the lawsuit was to give the marriage option to future generations of sexual minorities.

“There are many same-sex couples whose relationship ends rather quickly because they can’t see a future together. I was one of them,” Kunimi said.

(This article was written by Kenta Maeda and Sakura Kawamura.)