Analysis: China stages its own ‘2-plus-2’ with US in frigid Alaska

Katsuji Nakazawa is a Tokyo-based senior staff writer and editorial writer at Nikkei. He spent seven years in China as a correspondent and later as China bureau chief. He is the 2014 recipient of the Vaughn-Ueda International Journalist prize for international reporting.

TOKYO — In 2017, President Xi Jinping called Alaska a “Shangri-La” for China when he stopped there while returning home from a meeting with President Donald Trump, former Alaska Gov. Bill Walker told Chinese state TV station CGTN in a recent interview.

“He said, ‘You will see an uptick in tourism from China,’ and boy did we,” Walker said.

Such was the spin in Chinese media ahead of Thursday’s meeting in Anchorage, Alaska, of top diplomat Yang Jiechi and Foreign Minister Wang Yi with U.S. Secretary of State Antony Blinken and national security adviser Jake Sullivan.

China has tried to put the venue of Alaska in a positive light, partly by referencing Xi’s surprise visit to the northern state and noting that Beijing and Washington share a similar physical distance from Anchorage. The Alaskan city also has been relatively successful in bringing COVID-19 under control, and boasts a high vaccination rate.

But none of these reasons has stopped people across the world from wondering, why Alaska? 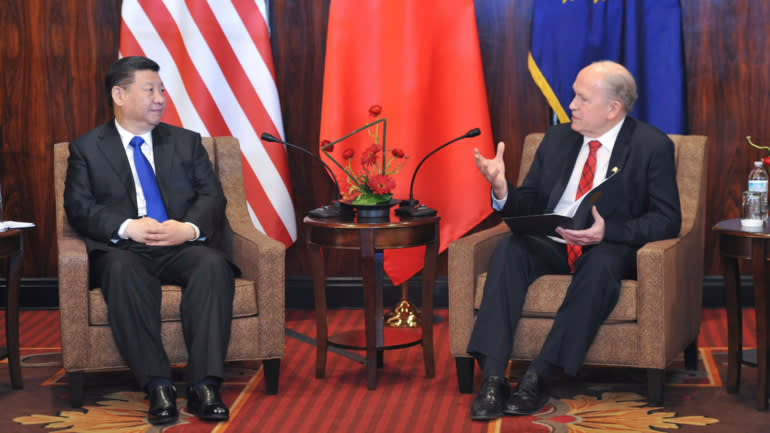 Chinese President Xi Jinping, left, listens to Bill Walker, then Alaska’s governor, at a meeting in Anchorage on April 7, 2017.   © AP

Beijing does not want to imply that its leadership is desperately chasing after Blinken as he returns from a trip to Japan and South Korea.

That is why China stressed in its announcement of the meeting that Yang and Wang were “invited” to visit Alaska. Technically, it is true. Chinese leaders cannot visit U.S. soil without an invitation.

But it is more likely that Beijing wants to prevent the impression that a serious divide exists between the U.S. and China. The meeting comes as the two countries face a mountain of issues: Hong Kong, human rights in the Xinjiang Uyghur Autonomous Region, Taiwan, the South China Sea and the Japanese-administered Senkaku Islands in the East China Sea.

For Xi, it must have been somewhat of a miscalculation that Joe Biden — his “old friend” with whom he goes back a decade — would be the American president to form an international coalition against China, rather than Trump.

He had some expectation that China’s tense relations with the U.S. might ease under a Biden presidency. But nearly 60 days into the new American administration, that is clearly not the case.

A closer look at the Anchorage meeting reveals some of China’s thinking.

The combination of Yang and Wang traveling together is rare. In the past, Yang either visited the U.S. on his own or joined with Wang as part of large Chinese delegations to events such as U.S.-China summits and strategic dialogues.

Yang met in June with Mike Pompeo, who was serving as Trump’s secretary of state, in Hawaii. Last month, Yang also talked with Blinken by phone to lay the groundwork for Xi’s first telephone talks with Biden. 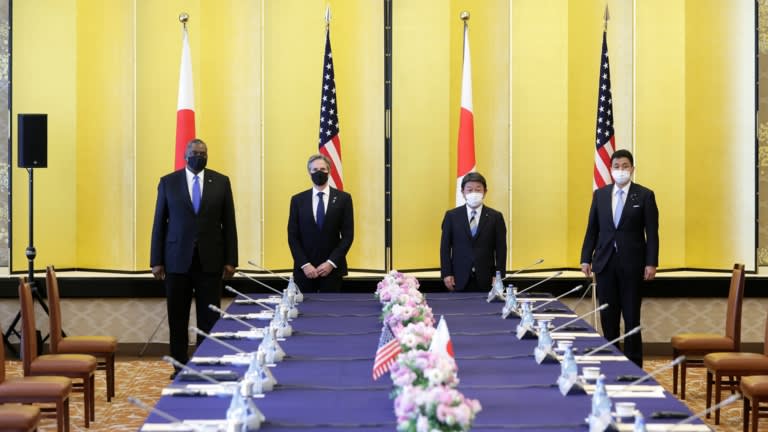 Diplomacy toward the U.S., the most important element of Chinese foreign policy, has been Yang’s turf as he serves as director of the Office of the Foreign Affairs Commission of the Communist Party’s Central Committee. The commission manages all foreign policy.

As Blinken conducts an Asian tour rebuilding alliances with an eye on China, there was no option of him visiting Beijing this time. Being aware of that, China tried to catch Blinken on his way home.

The combination of Yang and Wang meeting the U.S. delegation, rather than the foreign minister alone, is notable.

China’s leaders did not want a normal foreign ministers meeting. They wanted this to be the start of new high-level talks with the Biden administration.

At first glance, Yang and Wang meeting Blinken and Sullivan resembles the “two-plus-two” gatherings of foreign and defense ministers that Blinken and Defense Secretary Lloyd Austin attended in Tokyo and Seoul.

That is where Yang comes in.

Since Biden’s election win in November, China had been sounding out a possible Yang visit. China also wanted to send Liu He, the vice premier in charge of the economy and a Communist Party Politburo member.

Liu was the driving force behind the signing of China’s “phase one” trade deal with the U.S. in January 2020. He is also a close aide to Xi. Chinese Vice Premier Liu He and President Donald Trump shake hands after signing the “phase one” U.S.-China trade agreement at the White House in January 2020.   © Reuters

If Liu could visit the U.S., it might gradually pave the way for a review of Trump’s harsh tariffs on Chinese products.

Hypothetically, if Liu and Yang visited the U.S. at the same time, Beijing might secure a framework similar to the U.S.-China Strategic and Economic Dialogue during Barack Obama’s presidency.

But with the Biden administration’s economic and trade policies still under review, the U.S. side was only willing to accept Yang at this time.

As a result, the two countries settled for a meeting of their top diplomats in Alaska on Blinken’s way home from South Korea. China declared it a “high-level strategic dialogue.”

Yang’s high rank justifies him playing the role of Xi’s special envoy, bearing with him a personal letter from Xi to Biden. If Yang hands such a letter to American officials in Alaska, Beijing can use it as a symbol of U.S.-China reconciliation.

Washington flatly denies that the meeting represents a strategic dialogue with China.

“This is not a strategic dialogue,” Blinken told congressional lawmakers on March 10. “There’s no intent at this point for a series of follow-on engagements.” Diplomat Yang Jiechi, left, and Foreign Minister Wang Yi attend a signing ceremony between Zimbabwe and China in 2018 at the Great Hall of the People in Beijing.   © Reuters

Meanwhile, some pundits say the combination of Yang and Wang provides clues as to the future of China’s diplomatic leadership team.

Yang, 70, is a member of the Politburo, which consists of the Communist Party’s 25 most senior officials involved in all important decisions. Wang, 67, is outside of the Politburo and thus ranked much lower in the all-important party hierarchy.

Wang was expected to retire after the 2022 party National Congress, due to the customary retirement age of 68. But speculation is growing that this Alaska trip — as Wang works hand in hand with Yang — could pave the way for him to inherit Yang’s role in the future. Such a move would be related to personnel changes at next year’s party congress.

Another official, longtime Xi ally Wang Qishan, stayed on after the customary retirement age to be Xi’s vice president. In a recent high-profile personnel change, Xie Zhenhua was appointed as China’s special envoy in charge of the climate change issue in late February, shortly before the annual session of the National People’s Congress, the country’s parliament.

Xie, who is already 71 and past retirement age, takes center stage again.

It is said that when the Paris Agreement to combat climate change was adopted in 2015, Xie played a role in last-minute coordination with John Kerry, then the U.S. secretary of state. Xie was serving as China’s special representative on climate change at the time.

This time, China appointed Xie as special envoy, a title that can reflect Xi’s wishes easily. That is because Kerry assumed the post of U.S. special presidential envoy for climate, receiving instructions from Biden directly.

The Chinese leadership likely ordered Xie to take advantage of his connections to Kerry. China also revealed that Xie already has been in contact with Kerry. Future cooperation on climate change will be a focal point at this week’s U.S.-China meeting.