TOKYO — Japanese Prime Minister Yoshihide Suga’s expected decision later this week on whether to lift or extend the COVID-19 state of emergency in Greater Tokyo will determine the fate of the postponed Summer Olympics in July. Less noticed, perhaps, is that it will also affect the futures of hundreds of international students due to start at Japanese universities on April 1.

Foreign students who spoke with Nikkei Asia complained of a double standard. Japan is taking precautions to receive upward of 11,000 athletes from around the world with minimal public health risk this summer. Nikkei reported last week that the government is looking to limit international arrivals to 2,000 people per day.

“When the subject is the Olympics, they immediately have a response. But when it comes to students, there isn’t enough pressure,” said Denmoree Aberion, a Filipino whose preparatory language studies in Osaka for a masters program at a university in Japan, have been postponed for a year.

Foreign students pursuing higher education in Japan are a key resource for the country’s aging economy. Before COVID, Japan’s attractiveness to international students was growing each year. By May 2019 there were more than 300,000 such students, according to government statistics.

But that may be changing. Imane, a student from Montreal, wrote on Facebook that she regretted committing to Japan, in response to news of Olympic athletes being given special permission to enter. 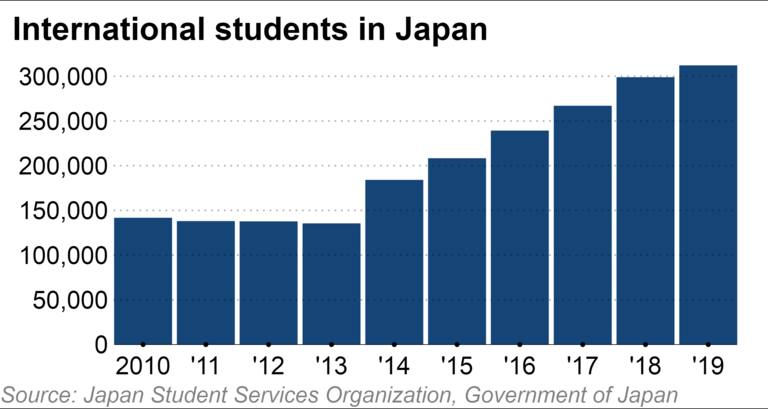 Visas are optional for Olympians, who need only an accreditation card issued by the International Olympic Committee. Competitors in certain events, such as sailing and endurance sports, typically arrive weeks or months ahead of the games to get used to local conditions. Qualifying events for artistic swimming, diving, and wheelchair rugby will be held in Japan in April.

Most Olympic festivities will be held in relative isolation in the Tokyo Bay district.

“I understand people who have been training for four years need to come in, but it’s kind of frustrating that not everyone who should be there can get in,” Imane told Nikkei, who declined to give her surname.

The entry ban has affected foreign students at every level, from high school graduates looking to take Japanese university entrance exams to doctoral students wanting to write their dissertations under the supervision of Japanese professors. Some must be physically present in Japan to pursue their studies.

One, Alejandra Gonzalez, is a law student from Colombia whose one-year graduate program at Waseda University includes an internship. “I’m really keen to do the internship so I can get used to the Japanese work environment,” Gonzalez said.

Academic requirements at some foreign universities can also mean that online classes receive no academic credit, forcing students to consider doubling up on courses — online in Japan and offline at their home institutions.

“I need to be in Japan to interview contemporary writers and novelists, and have access to papers and books,” said Giulia Luzzo, an Italian student slated to write her doctoral thesis on Japanese contemporary women’s literature at Saitama University.

Universities are dealing with concerns and complaints from international students, while also directing their own questions to Japan’s Education and Foreign ministries, without receiving much clarity.

“It’s not just the border closure, but the government is not accepting visa applications, and that is the most stressful thing for us and for the students,” said the international studies director at a university near Tokyo. 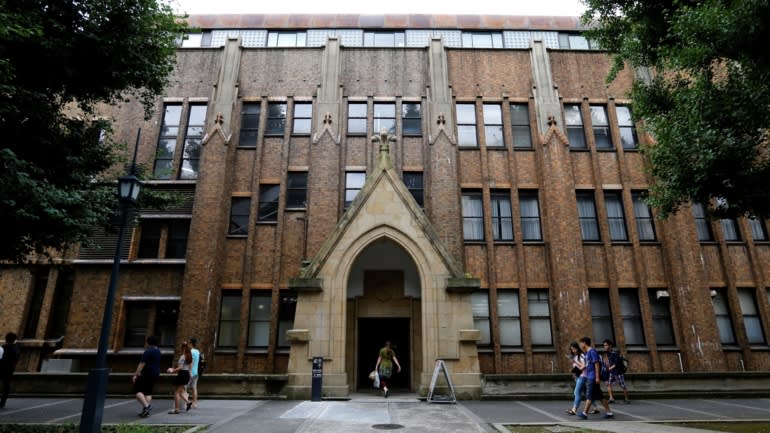 The University of Tokyo in July 2016. To lessen the strain on foreign students, the university is keeping dormitories open for those who have to quarantine.   © Reuters

To lessen the strain on foreign students, the University of Tokyo and Sophia University are keeping dormitories open for those who have to quarantine. Saitama University will provide daily necessities for the 14-day quarantine free of charge, the international studies office told Nikkei.

But even with those accommodations, the lack of clarity on when students can enter Japan and begin their studies puts some at risk of losing their scholarships and grants. Luzzo, who received the European Union’s prestigious Erasmus scholarship, may have to forfeit it if she cannot enter Japan by this summer.

Japanese embassies and consulates are unable to accept and process visa applications until after the emergency declaration ends.

“After the state of emergency, we’re going to consider very carefully how to open the borders,” an official overseeing foreign nationals at the Foreign Ministry told Nikkei. “So far we have no plans to have a special track for foreign students.”

With the spring semester starting in two weeks, a last-minute border reopening would cost students at least the first month of classes. Japanese visas typically take one to two weeks to process, after which travelers need to arrange for COVID testing, then spend another two weeks in quarantine.

“[Even] If the state of emergency will end, it doesn’t mean the entry restrictions will end as well. If [visa processing] resumes, it will take some time to complete the visa application, and the spring semester will start soon,” said Hisashi Nunami, coordinator for inbound exchange programs at Waseda University.

On one Facebook group, students are speculating that they will miss the April semester entirely. “If the Olympics go through, we don’t know if it will be successful. What if it becomes a superspreader event, and borders close again?” Aberion, the Filipino student, told Nikkei.

“What I request or hope for is even if they keep the borders closed, I would like them to start accepting and issuing visas, and when the borders open [students] can actually come in at that time,” said an international studies director who asked for anonymity.

The experience has made some students question making a long-term investment in Japan, including Luzzo, who has studied Japanese for seven years in preparation for her doctorate.

“I have committed my life to Japanese studies for the most time,” Luzzo said. “But if Japan doesn’t want me, maybe it’s not too late to change my mind and move to another country instead, maybe Korea or another Asian country, or even America.”

Aberion, who gave up her job in June to move to Japan, asked for clearer instructions from the government.

“If they just give us a time frame and say we can enter after the Olympics, at least we can plan for the next few months,” Aberion said. “So I can at least decide if I’ll persist or say ‘sayonara’ to Japan.”