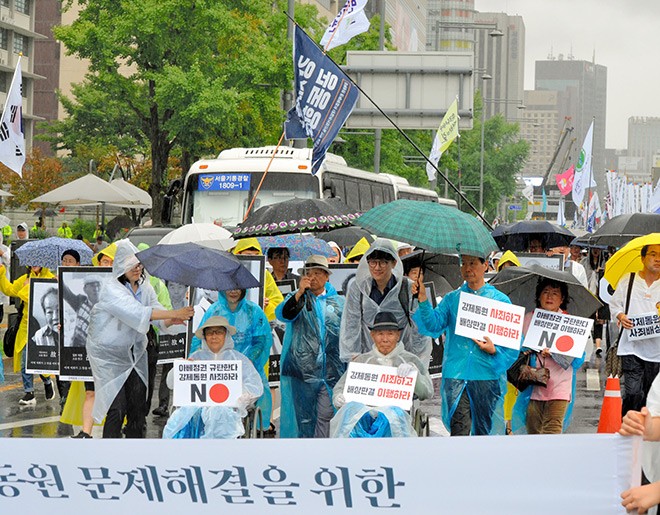 Former wartime laborers who worked at Japanese factories and their supporters march toward the Japanese Embassy in Seoul in a protest rally on Aug. 15, 2019. (Takuya Suzuki)

SEOUL–Seventeen Japanese companies will be defendants in a lawsuit that will open here in May or later over wartime labor compensation claims filed by former Korean workers and bereaved families six years ago.

But this lawsuit, filed at the Seoul Central District Court, is suing the largest number of Japanese companies.

According to the district court website, the suit was brought in May 2015 by 85 plaintiffs claiming that they or their relatives were forced to work at factories on the main islands of Japan during World War II.

The plaintiffs are demanding 8.6 billion won (830 million yen, or $7.66 million) together in damages.

The court accepted a motion for service of publication over the lawsuit on March 16 to notify the defendants. It goes into effect on May 18.

People familiar with the circumstances of the case said the district court accepted the legal complaint by the plaintiffs when they filed in 2015.

The Japanese companies received the legal complaint and submitted a written response denying the plaintiffs’ claims.

But court procedures stalled after the Japanese defendants refused to accept court documents, pointing to a lack of Japanese translation and that the lawyers representing the plaintiffs were shuffled.

The court took the recent motion for service by publication after the plaintiffs revised their legal complaint.

Mitsubishi Heavy said it is aware of the service by publication.

“As in the past, we will respond by working with the Japanese government,” an official said.

Nippon Steel said it will state its case when the lawsuit opens.

The Japanese government maintains that the 1965 bilateral agreement between Tokyo and Seoul settled all compensation claims by South Korea from World War II.