Back to the office? How Japan might work after COVID-19

TOKYO — When Fujitsu assigned 43-year-old Takahiro Oono to a new job in the summer, he feared it would mean having to leave his family in western Japan and live alone in Tokyo — until his employer offered him another option.

Oono was allowed to stay where he was and work remotely as part of a Tokyo-based team. “I was relieved,” Oono said. “My private life stayed the same, so I was able to focus on my new job.”

The option was part of a package of reforms Fujitsu announced in July to adapt to a post-pandemic “new normal” where working from home seems a more viable option. What started as an enforced response to the coronavirus pandemic is now a long-term commitment that will improve the company, CEO Takahito Tokita told Nikkei Asia last year.

But while the list of companies like Fujitsu is growing, the question remains: Are Japan’s employers and employees ready for widespread change to a cautious and conservative corporate culture?

The Japanese government will on Sunday lift a state of emergency imposed in Tokyo and surrounding prefectures since January, when it called for teleworking. The end of the state of emergency — coupled with the rollout of COVID-19 vaccines, which also will allow a return to greater normality — will test Japan Inc.’s newfound working habits.

Of course, every country’s workplaces have been affected by the pandemic. But its impact in Japan might be larger than in the rest of the world. The country has traditionally been notorious for long working hours until late at night in the office, even creating the word “karoshi” — death caused by work stress.

In a January survey conducted by Ashita-Team, a human resource tech company, 74% of respondents — working for small and midsize companies — said they would like to continue to work remotely. But they are also pessimistic that change will endure: 41% of the 300 workers who responded said that teleworking will not be established in 2021 — up 14 points from a previous survey in July 2020. The headquarters of Fujitsu in Tokyo last August. The company has quickly embraced more remote ways of working.   © Reuters

Not only have workers become used to the resurgence of the virus, but “managers, especially those who are aged and allergic to tech operations, respect in-person communication,” argued Hiroyuki Akahane, Ashita-Team’s CEO.

At the same time, however, the country faces one of the most acute demographic challenges — a situation that some think a more flexible work environment could help to address.

Attracting and retaining young talent by offering a choice of work style is vital as the workforce shrinks, says Shigeki Yaginuma, marketing director at Robert Walters Japan, the Japanese subsidiary of the London-based recruitment agency,

“Work from home is an option that should be offered to gain and keep talent,” said Yaginuma. “Encouraging employees to take that option is also important.”

There is also impetus from the government of Prime Minister Yoshihide Suga. It wants to revitalize rural Japan and digitize administrative processes that still rely on faxes and hanko stamps for signing documents.

Japan’s administrative and regulatory reform minister, Taro Kono, has worked on abolishing 99% of hanko practices — which would also help remote working. “I want to show that Kasumigaseki [where ministries are located] can do it when we try,” said Kono in January.

Companies are increasingly responding to calls for more remote working. Honda Motor, which allowed nearly 30,000 employees to work from home when the government declared a state of emergency last April, has introduced work-from-home allowances to cover increased utility bills and the costs of any equipment — and abolished monthly commuter train stipends. For some workers who had never imagined working from home, teleworking has dramatically changed their working environment.

“I used to spend a little less than two hours every day commuting, and I never thought about being able to change that,” said Kana Morino, a telephone operator at Sompo Japan Insurance who now works from home about four times a week and spends more time with her family.

Following the closure of some of its call centers nationwide during the state of emergency last year, the insurer introduced a system to allow home working for some operators.

“Setting up the system requires money, and it is questionable if the productivity has overcome that increase in cost,” said Michitsugu Kouda, who manages the call centers. But teleworking can help operators who previously might have been forced to quit work if they had to look after relatives, Kouda said.

“Quite a few telephone operators repeatedly change their job, but allowing work from home can deliver a message that we care about our operators,” he added.

But changing the work habits of Japan Inc. is not simple. Evaluating employees still relies heavily on an office presence. Staffers may fear being marginalized if they work at home.

A 32-year-old man at a Tokyo-based publisher is among those who has stopped teleworking and restarted commuting. “I realized my boss gives tasks only to those in the office,” he said. And having only joined the company in 2019, he wants to gain more experience alongside colleagues in the office. 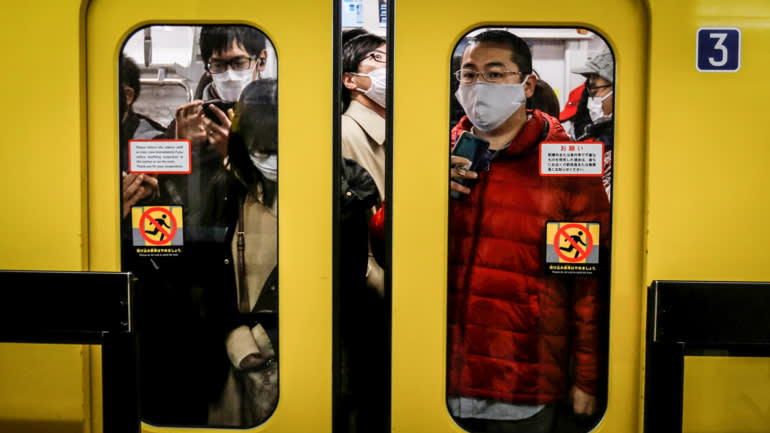 A subway train in Tokyo. Commuting patterns have shifted during the pandemic, but many workers still feel disadvantaged if they are not in the office.   © Reuters

Yuji Kobayashi, principal researcher at Persol Research and Consulting, which specializes in human resources and work-style reforms, describes Japan’s as “patchy teleworking.” When companies have some employees who are working from home and others who aren’t, teleworkers can feel insecure compared to those in the office.

“People somehow feel compelled to come to the office even if it is unnecessary, if the company allows them to make their own choice” of workplace, added Kobayashi.

Companies also need to figure out how to support home workers. A survey conducted by Robert Walters Japan found that Japanese companies are less focused on supporting employees’ mental health when they work from home.

“Employees in Japan say they initially want their employers to help them set the working environment at home, such as paying for their extra monitor screen and communications expenses. And companies are responding to those requests, as well as allowing flexible work hours,” said Yaginuma.

“But actually providing support for mental health to prevent them from feeling isolated becomes increasingly important in times of uncertainty. Companies in the U.S. and Europe have invested more in these programs,” he added. Then there is employers’ belief that remote employees cannot achieve as much as working together in an office.

Madoka Ota, general manager in the workplace experience department of the trading house Mitsui & Co., believes some work is better done in the office. “Targeted communication can easily be done using [digital tools such as] Microsoft Teams, but many [employees] would have felt the benefits of spontaneous communication arising from being in the office,” she said.

Mitsui recently opened a new headquarters, planned years before the COVID-19 outbreak, where certain departments were intentionally placed near one another to facilitate closer collaboration, and breakout spaces encourage less structured working.

For Mitsui, with more than 5,000 employees working in sectors including energy, resources, health care, and information and communications technology, casual communication is a way to spark ideas.

Ota also pointed out how big projects require employees to work in teams across departments and with clients or stakeholders outside Mitsui. “It is not impossible to connect with each other from home, but it is more efficient to come to the office,” she said. 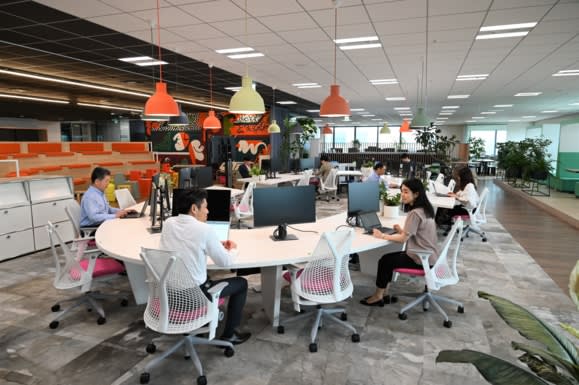 Japan’s trading company Mitsui & Co. this year opened a new office that was designed to facilitate face-to-face communication between employees in different departments.

One of the reasons why many Japanese large firms prefer to encourage office work stems from the country’s distinct workplace culture, according to Persol’s Kobayashi.

Job descriptions have been all but nonexistent in Japanese companies, which traditionally do little external hiring beyond recruiting graduates at the start of their careers. Once hired, managers value not only the outcome of employees’ work but also the effort they put in. Working from home makes that more difficult to assess.

“In Japanese workplaces, people are given an ambiguous scope of work that usually overlaps with others. People would chat with team members at the office to make adjustments to their own work,” Kobayashi argued. “But teleworking makes this coordination difficult. … Many companies now claim that they are losing the sense of unity as a team, but that is because they encouraged mutual reliance at work.”

Some companies have already started revising the way they evaluate personnel.

Fujitsu introduced job descriptions for 15,000 of its management-class employees in April and is considering extending the system. The approach complements the remote work shift, according to Manabu Morikawa, senior director of the company’s human resources unit. “It is important that [bosses] know what responsibility and output is expected of [each staff member] in advance,” he said. 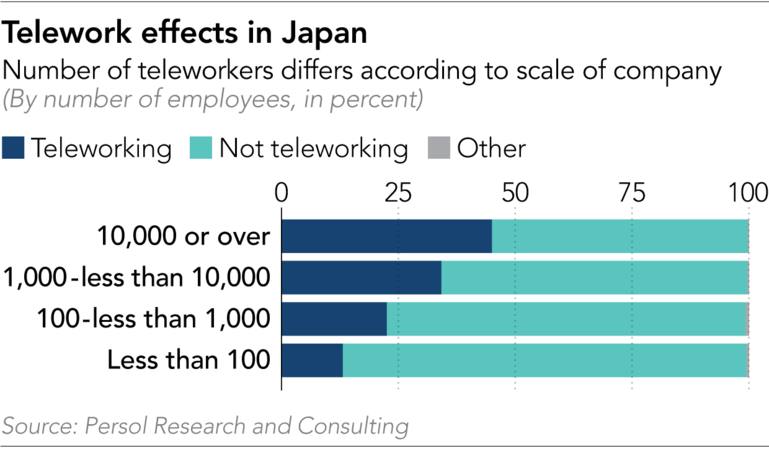 But Morikawa acknowledges, “it would take time for Japanese society to completely shift” to a system where all employees have clear job descriptions.

“Work style is probably happier in Western culture, and Japan is getting closer to that because of the coronavirus,” Morikawa suggested. But Japan’s typical lifetime employment model creates strong loyalty to companies. “A feasible solution may lie in a hybrid” of both systems, he said.

Ashita-Team is gradually introducing a new style of business discussion: When a salesperson is having an in-person meeting with a client, Akahane logs in through Zoom. “There are still many managers who appreciate we visit them and talk face to face, but I can also join the meeting remotely,” the CEO said. “This new hybrid style, which values both efficiency and communication, has a lot of potential.”

Sompo Japan’s parent company, Sompo Holdings, is taking a further step by starting an initiative to ask employees to write a statement defining their own mission. Every month each employee meets their boss to discuss and renew their statement. A hundred managers have already created their statement. The insurer believes all of its over 300 employees are soon creating their statement, and the initiative will be expanded to other group companies from April.

Motoki Kato, a general manager who is responsible for the initiative, insisted that finding out and encouraging each employee’s mission would lead to a strongly tied team even among those working at home.

Fujitsu’s Oono suggested the availability of choice is what really matters to him — and for work to be efficiently done. “The right balance” for remote work and face-to-face communication “would vary for different individuals or types of jobs,” he said. “Making it possible to strike that balance would be important,” he said.