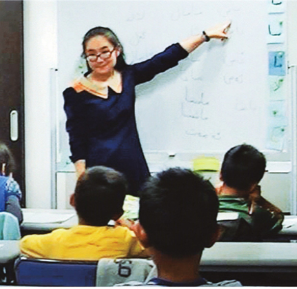 The news of a Uyghur woman’s death has upset the Uyghur community in Japan. The Chinese government has been stepping up its crackdown on ethnic minorities living in the Xinjiang Uyghur Autonomous Region. The woman’s father and others have been imprisoned in “concentration camps” one after another. As the woman was wrought with anxiety about the fate of her father, she returned to the autonomous region to look for him. The Uyghur community in Japan learned that she had died at the end of last year. Her acquaintances feel a sense of regret that they failed to dissuade her from returning to Xinjiang, even though they knew that returning would place her life in danger.

The woman is Mihray Erkin from the Kashgar district in southwestern Uyghur Autonomous Region. After graduating from Shanghai Jiao Tong University in China, she came to Japan in September 2014. While studying at the University of Tokyo graduate school and elsewhere, she taught English and Uyghur to Japanese and Uyghur children living in Japan. Her future dream was to return to her hometown and use the knowledge she acquired in Japan in a profession or teach Uyghur to children to preserve the language.

The persecution of Uyghurs in their homeland continued to worsen. Mihray’s father was running a “private school” to teach the Uyghur language, which was banned in schools in the autonomous region, and this may be the reason why he and several other of her relatives were imprisoned in April 2019 and later.

Although Chinese authorities impose strict information control in the autonomous region, those who were fortunate enough to be released from the camps have been able to convey information about the actual conditions inside them through social networking service (SNS) and other means.

Overseas research institutes and media have reported through videos and testimony that in the camps the Uyghur identity is being expunged and inmates are being brainwashed to praise Chinese culture.

According to her acquaintances, Ms. Mihray seemed to be under stress and could not even eat well. She seemed restless and told everyone around her that she wanted to “return to her homeland.”

In the summer of 2019, Mihray decided to return to Xinjiang without consulting her friends, left them a note, and headed for Narita Airport. When one of Mihray’s friends saw the note, she immediately called a woman from the autonomous region who had supported Mihray’s study in Japan. The woman stopped her car in the parking lot of a convenience store and hurriedly called Mihray.

“If you go back, they will definitely take you somewhere. Just being a Uyghur will be a crime,” the woman told Mihray.

The woman tried to dissuade Mihray from going back to Xinjiang over the phone for almost one hour, but Mihray, who was already on her way out of the country, was firmly determined to return to her homeland.

“I want to find my father. He worked so hard to raise us,” said Mihray. “I can’t just wait here in Japan and do nothing. I want to do something for my father, even at the risk my life.”

Mihray was in particularly precarious situation. This is because one of her relatives, who defected to Europe, is well known for disseminating information about the plight of the Uyghurs. Since the Chinese authorities are equally wary of relatives of people they regard as dangerous, there was a good chance that Mihray would be sent to a concentration camp if she returned to Xinjiang.

A few months after her departure from Japan, a photo of Mihray hospitalized in Shanghai was sent to one of her acquaintances living in Japan. Mihray’s acquaintances were relieved to know that she was alive but at the same time they felt a bad premonition had come to pass.

Uyghurs in Japan were shocked. The woman who tried to dissuade Mihray said, “Following the news of her death, everyone regretted failing to have stopped Mihray from returning to Xinjiang. “Why didn’t I go to the airport to stop her!” They keep blaming themselves.

Many Uyghurs in Japan want to return to the autonomous region someday and use the experience they gained in Japan for the development of their native places. If they return, however, they risk being transported to a concentration camp. They are even unable to visit hospitalized relatives or attend funerals.

“China’s detention policy took Mihray’s life,” he said. He went on to say: “Chinese authorities make light of Uyghurs’ lives in the autonomous region. Such a thing should not be allowed anywhere in the world. I want Japanese people to spread the word that a person who was educated in Japan and interacted with Japanese people for many years suddenly vanished one day.”