LONDON — The U.K.’s minister for Asia sees freedom of navigation as “an incredibly important issue” for the country that will deploy a new aircraft carrier to the Indo-Pacific region later this year.

Nigel Adams spoke with Nikkei Asia on Wednesday, one day after the government published a policy document outlining the country’s comprehensive strategic framework for engaging with the world for the next decade.

The 100-page document titled “Global Britain in a competitive age — The Integrated Review of Security, Defense, Development and Foreign Policy” states that the Indo-Pacific region is critical to the U.K.’s economy, security and global ambition to support open societies.

Adams did not give details of the timing, location, or activities of the deployment of the HMS Queen Elizabeth. But when asked if there will be freedom of navigation exercises, he did not discount the possibility, saying, “Of course the United Kingdom sees freedom of navigation as an incredibly important issue.”

The integrated review states that “much of the U.K.’s trade with Asia depends on shipping that goes through a range of Indo-Pacific choke points,” and “preserving freedom of navigation is therefore essential to the UK’s national interests 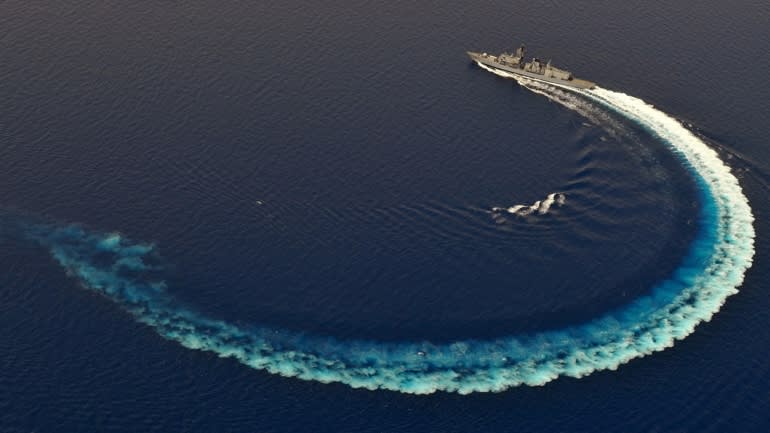 The U.K. is expected to conduct joint exercises with allies in the region over the course of the HMS Queen Elizabeth’s deployment, but a major focus will be on whether it takes part in freedom of navigation exercises in the South China Sea alongside allies such as the U.S. Any such move would likely anger Beijing, and may also meet a mixed reception from other countries that do not want tensions to rise in the region.

Adams hinted that the U.K. does not have a current interest in joining the “Quad” — a security dialogue between the U.S., Japan, Australia, and India.

The Quad has recently gained more attention in the Indo-Pacific sphere as the Biden administration is taking a more proactive approach to the informal alliance. However, experts point out that though the integrated review asserts that the U.K. will be a multilateral player in the region, there was no mention of this grouping.

“If there’s no reference to it in the Integrated Review, that is the position,” Adams said, pointing out the U.K. has detailed the groups it wants to apply to join.

The document talks about regaining dialogue partnership status with the Association of Southeast Asian Nations, having lost this status when it left the European Union, and that Britain is applying to join the Comprehensive and Progressive Agreement for Trans-Pacific Partnership, an 11-member trade bloc that includes Japan, Canada and Malaysia.

Adams however caveated that he would not be able to foretell what the situation regarding the Quad will be in the future. When it comes to China, the U.K. has reiterated its stance of balancing political disagreement and economic engagement.

However, skepticism has been growing in the ruling Conservative Party toward Beijing over its treatment of Hong Kong, human rights abuses in Xinjiang, and the handling of the outbreak of the Coronavirus pandemic. China hawks have criticized the British government for not taking a stronger stance in the overhaul of foreign and defense policy.

Adams said, “China is an authoritarian state, it’s got different values to us, and you will notice that, where we disagree with China, we act,” referring to the U.K.’s call for international action over Xinjiang, and offering a new route to British citizenship for Hong Kong BNO status holders.

“We’ve noted in the review that China’s assertiveness is potentially the most significant geopolitical shift we’ve had in recent years, but cooperation with China is essential if we’re going to tackle some of the challenges that we set out in the review itself. Climate change, not least,” he said.

When asked if the U.K.’s new strategic framework of increased engagement in the Indo-Pacific could be characterized as a China containment policy, he responded, “I certainly wouldn’t describe it [in those terms].”

The U.K.’s decision to reverse decades of disarmament and increase its nuclear warhead stockpile cap from 180 to 260 — despite its previous aim to decrease the number to 180 by the mid-2020s — has attracted criticism from opposition parties in the U.K. and from international campaigners.

Though the U.K. is not a signatory, the Treaty on the Prohibition of Nuclear Weapons came into effect earlier this year.

Adams insisted, “The best way for us to protect ourselves and our allies in NATO is to ensure that the continued operation of a minimum and a credible and an independent nuclear deterrent, and that’s the reason for it. We’re absolutely committed to multilateral disarmament.”

He added, “We have a shared long term goal along with others, of a world without nuclear weapons, but we believe this approach whilst not a target for the number of warheads is a minimum, credible and independent deterrent.”