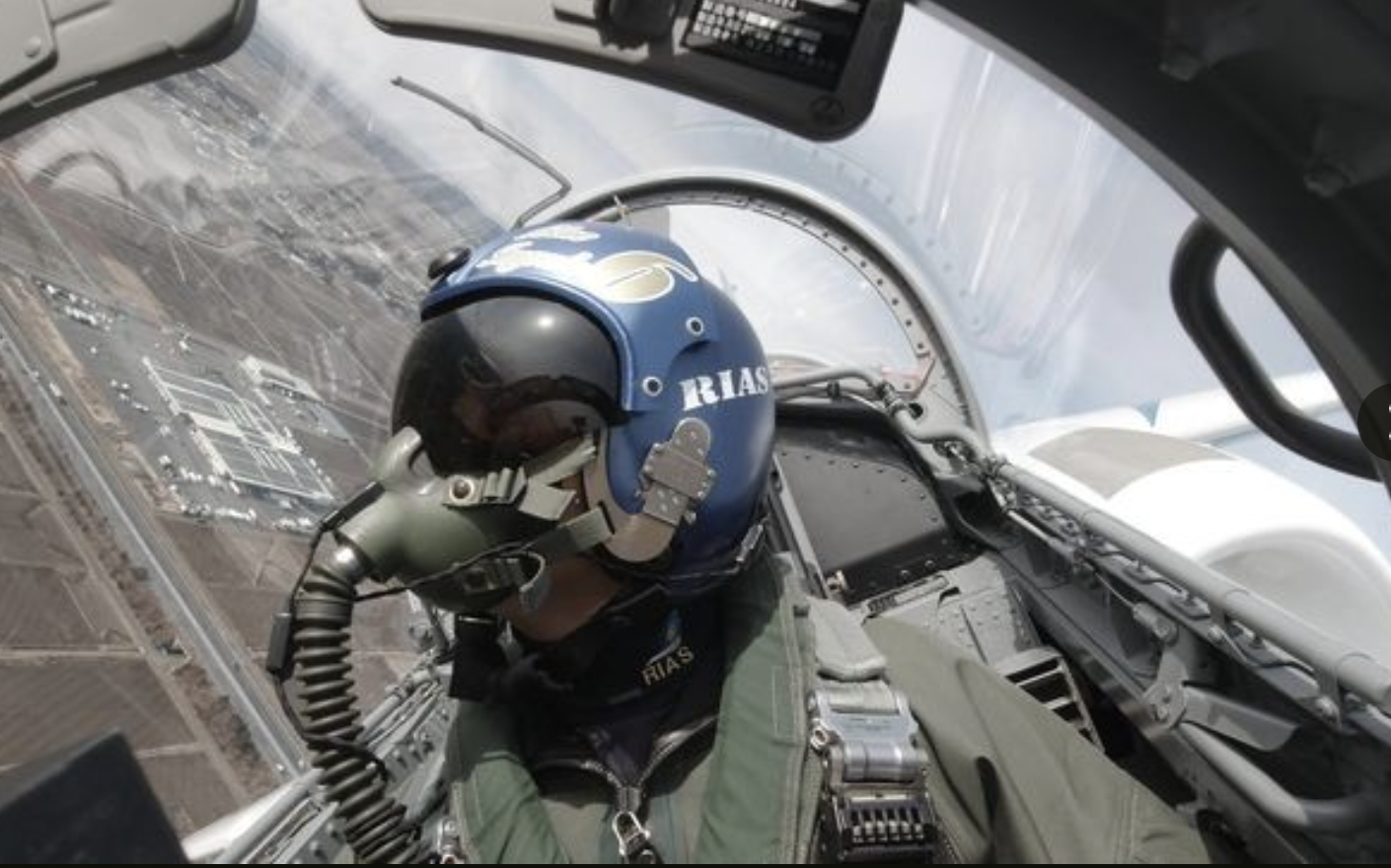 Takahiro Sato scans the skies during a fight in his T-4 Blue Impulse aircraft on Feb. 17. (Wataru Sekita)

HIGASHI-MATSUSHIMA, Miyagi Prefecture–Elite pilot Takahiro Sato adopted a call sign based on the coastline of his hometown after the March 2011 earthquake and tsunami disaster razed the coastal area where he grew up.

He chose the name Rias to honor the saw-toothed rias coastline in northeastern Japan that brought back so many happy childhood memories.

With hopes for the reconstruction of his devastated birthplace never far from his mind, Sato, 35, continued flying as a member of the Air Self-Defense Force’s crack Blue Impulse aerobatic team for three and a half years.

“It (the disaster) has not ended, and I will keep working to convey the reality of the disaster-hit areas,” said Sato, a native of Yamada, Iwate Prefecture, following his last flight with the Blue Impulse team on Feb. 19.

Sato was studying at an ASDF facility in Nara when the magnitude-9.0 Great East Japan Earthquake struck. While he was busy in the athletics ground on the afternoon of March 11, 2011, he recalled that an instructor ran out of a building to tell him that “Japan is now in a terrible situation.”

Switching on a TV, Sato sat horrified as he watched live coverage of a massive wave engulf all that was familiar to him in Yamada, where he was born and raised.

A few days later, Sato managed to confirm that his relatives living in the area had survived the disaster. But former classmates in local elementary and junior high schools, as well as onetime neighbors, were among more than 800 residents of Yamada who perished or remain unaccounted for.

Although SDF personnel nationwide were dispatched to the quake-affected zones for debris removal and to search for missing individuals, Sato was not deployed to join the operations because of his status as a trainee pilot.

Feeling impotent at not being able to do anything for his native birthplace, Sato sought permission from his supervisor to use Rias for radio conversations among his fellow aviators.

The aviator call sign is normally determined at the time of one’s deployment to their first unit, so pilots continue using the code name for the rest of their professional careers.

In summer 2017, Sato’s dream of being selected to fly with Blue Impulse came true. He was ecstatic when quake victims told him his performance in a T-4 Blue Impulse jet at aviation festivals and elsewhere gave them “encouragement.”

When Sato flew over Kamaishi, Iwate Prefecture, in September 2019 to coincide with a Rugby World Cup match, he passed above Yamada for the first time as a pilot.

The landscape from the sky was totally different from the surroundings where he spent his childhood.

“There were many vacant lots in the town,” Sato recalled. “Some new roads could be seen but there were few buildings. The scenery left me feeling immensely sad.”

The view from high above was like taking part in daily flight drills around the Matsushima base. The landsape was flat and there was little to see.

With so many reports about countless individuals struggling to regain some semblance of their former lives, Sato could not bring himself to accept that the landscape was “being rebuilt.”

“The quake disaster left many scars, so it would be wrong to conclude it is restored to how it was,” said Sato, looking back on those days.

Last year, Sato flew on an ASDF mission to celebrate the arrival of the Olympic torch at the Matsushima base from Greece. He also performed with Blue Impulse teammates over the capital to express gratitude to health care providers on the front line of the COVID-19 pandemic.

Sato viewed those flights as opportunities for people to “reflect on the fact the earthquake disaster has not ended,” adding that he takes off on those missions to “fulfill that objective.”

After recently leaving Blue Impulse, Sato began serving in another unit from March. Asked about the 10th anniversary of the earthquake and tsunami disaster, Sato simply said he does “not like that kind of question.”

“Retiring as a pilot (of Blue Impulse) or the 10th anniversary of the disaster has no significance for me,” he said. “I will keep going with the name Rias.”