TOKYO — Deep down on the ocean’s floor lies a sherbet-like substance that could revolutionize the way the Japan consumes energy, but there’s just one problem: extracting the fuel from the dark depths of the seas.

One Japanese company believes it has the solution. Modec, a maker of offshore oil platforms, has plans to develop a system that is designed to extract methane hydrate, also known as “fire ice,” from the ocean bottom and become a source of clean-burning hydrogen.

Modec will pilot the technology during the next fiscal year starting April. The technology will be used in a novel floating unit that will retrieve the methane hydrate.

The project aligns with the Japanese government’s goal of attaining net-zero emissions of greenhouse gases by the year 2050. A stable source of hydrogen would play a pivotal role in achieving that objective.

One cubic meter of methane hydrate can produce roughly 160 cubic meters of methane gas, which in turn, can be transformed in hydrogen.

Methane hydrate has long been a subject of exploration as a source of natural gas. This February, a Japanese government panel cited methane hydrate as an untapped repository of hydrogen and ammonia, another clean energy source.

The conventional way to explore for methane hydrate is at deep-sea locations where the ocean floor lies 1,000 meters below the water surface. The deposits are located a few hundred more meters beneath the sea bed. This method, however, has yet to attain commercial viability.

Modec looks to achieve a breakthrough by drilling for methane hydrate in shallow waters close to shore. The fire ice is broken down and lifted into the floating gasification unit, where it is converted into methane gas and transported to an onshore terminal through an underwater pipeline. 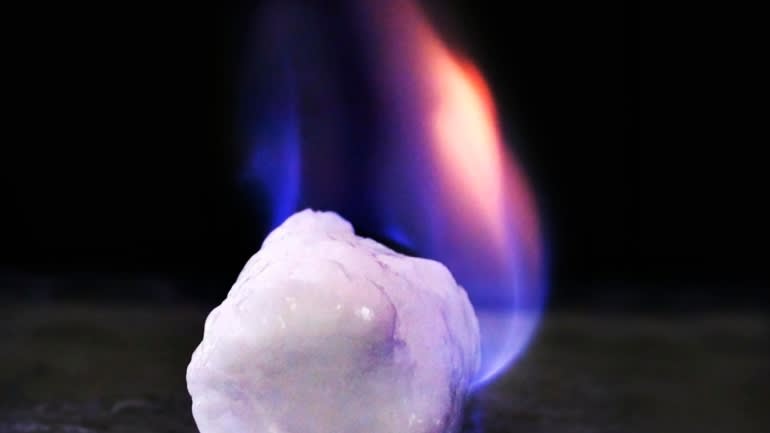 One cubic meter of methane hydrate can produce roughly 160 cubic meters of methane gas, which it turn can be transformed into hydrogen. (Photo courtesy of the U.S. Department of Energy)

Modec specializes in making floating units for petroleum exploration, among other resources. The company possesses the know-how to efficiently retrieve oil and natural gas using the natural upward pressure of the deposits.

Similarly, methane hydrate steadily becomes more gasified the closer it reaches the ocean surface. Modec believes it can apply its extraction technology to that concept.

Once the technology is developed, Modec aims to sell the equipment. An order for one floating unit is expected to fetch tens of billions of yen (10 billion yen equals $91.6 million).

Currently, most hydrogen is derived from natural gas, a fuel that resource-poor Japan imports. Securing stable supplies of hydrogen sources, as well as the costs, have been long-standing hurdles.

If Japan is able to access the methane hydrate deposits near its coastlines, the country can avoid the geopolitical risks inherent in procuring hydrogen sources. Methane hydrate emits 30% less carbon dioxide when burned than either coal or petroleum.

The government plans to raise Japan’s annual hydrogen consumption to about 20 million tons by 2050. For that to happen, the cost needs to be lowered to 20 yen per cubic meter from approximately 100 yen currently. If production of methane hydrate reaches a certain scale, it will play a role in bringing the hydrogen prices to a level that is competitive with imported liquefied natural gas.

Modec believes that its floating units will cut costs of procuring hydrogen below that of hydrogen sources obtained overseas, even when accounting for transport expenses.

Other engineering companies have moved toward hydrogen exploration. Mitsubishi Shipbuilding, a unit of Mitsubishi Heavy Industries, is developing a methane hydrate floating unit as well based on its offshore mining tech.

A need to nurture a new source of earnings is also driving this business trend. The shipbuilding and offshore platform business have been hammered by the drop in energy demand amid the pandemic.

Stiff rivalry from China and South Korea has worsened the business environment. The worldwide shift away from carbon threatens to impede new oil projects, so next-generation fuel such as hydrogen are seen as viable alternatives.