NEW YORK — U.S. Secretary of State Antony Blinken and national security adviser Jake Sullivan ended their two days of talks with their Chinese counterparts Friday, with Blinken rattling off a list of areas where the two sides are “fundamentally at odds.”

“We certainly know, and knew going in, that there are a number of areas where we are fundamentally at odds, including China’s actions in Xinjiang, with regard to Hong Kong, Tibet, increasingly Taiwan, as well as actions that it’s taking in cyberspace,” he told reporters in Anchorage, Alaska, after a three-hour session that morning.

“And it’s no surprise that when we raised those issues, clearly and directly, we got a defensive response,” Blinken added.

But he did cite other areas where the two countries’ interests intersect, such as Iran, North Korea, Afghanistan and climate.

China’s top diplomat Yang Jiechi told reporters after the meeting that the “high-level strategic dialogue” was candid, constructive and helpful, though there are still some important differences between the two sides, according to Xinhua.

“China will firmly safeguard its national sovereignty, security and development interests,” he said, adding that China’s development and growth is unstoppable. This followed hours of discussion Thursday, when a rare heated exchange took place on camera.

After speaking for 16 minutes and 15 seconds at the start of the meeting Thursday, including a jab at America’s human rights problems, Yang looked to his left and expressed sympathy for the woman who had been frantically taking notes.

It hinted that his remarks far exceeded the prepared text. While Blinken’s opening statement fit well into the agreed-upon two minutes, the unusually blunt tone of his words, in front of cameras, had caught Yang by surprise.

The American side will “discuss our deep concerns with actions by China, including in Xinjiang, Hong Kong, Taiwan, cyberattacks on the United States and economic coercion toward our allies,” Blinken said. “Each of these actions threaten the rules-based order that maintains global stability. That’s why they’re not merely internal matters and why we feel an obligation to raise these issues here today.”

The harsh words likely pushed Yang to bring forward some of the statements he had planned to raise later in the meeting. The passage on democracy was probably one of them. 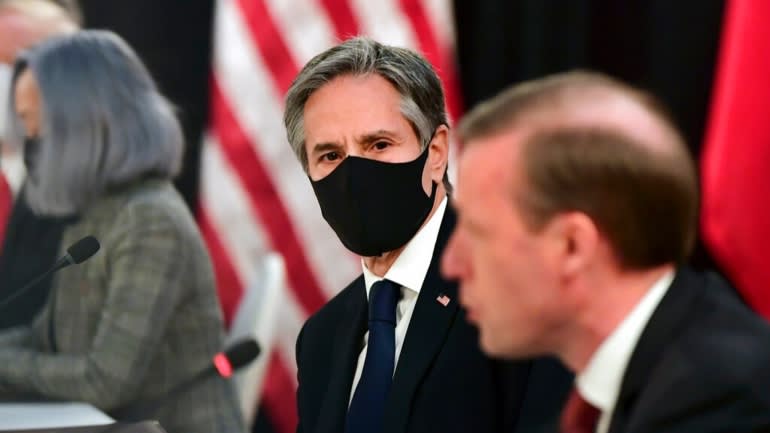 When the translator, working on her notes alone, mistakenly said, “In China, according to opinion polls, the leaders of China have the wide support of the Chinese people,” Yang quickly corrected her by saying “American opinion polls.”

The trading of jabs grew even more intense. Chinese Foreign Minister Wang Yi followed up, saying that the fresh U.S. sanctions related to Hong Kong, announced a day before the meeting, had “outraged” the Chinese people.

“This is not supposed to be the way one should welcome his guests,” Wang said.

After the U.S. and Chinese sides concluded their opening statements, journalists were ushered out of the room. But Blinken raised his hand to intervene.

“Hold on one second. Hold on one second, please,” he called on his staff. Sullivan, sitting next to him, waved the press corps back into the room. The Americans were not going to let the Chinese have the last word.

With the cameras back on, Blinken delivered perhaps his best line of the day.

“In my short time as secretary of state, I have spoken to, I think, nearly a hundred counterparts from around the world, and I just made my first trip, as I noted, to Japan and South Korea,” he said. “I have to tell you, what I’m hearing is very different from what you described. I’m hearing deep satisfaction that the United States is back, that we’re reengaged with our allies and partners. I’m also hearing deep concern about some of the actions your government has taken, and we’ll have an opportunity to discuss those when we get down to work.”

The media were ushered out again, but this time the Chinese side called them back. They, too, wanted the last word.

“Why is the U.S. afraid of the presence of reporters?” Yang snapped, in a performance highly conscious of the audience back home. “Don’t you believe in democracy? You should give China the right.”

The force of Yang’s words caused the busy translator to sit up, let out an ever-so-slight sigh, and begin the translation.

“Well, it was my bad,” Yang had said. “When I entered this room, I should have reminded the U.S. side of paying attention to its tone in our respective opening remarks, but I didn’t.”

Yang continued: “Well, isn’t this the intention of the United States — judging from what, or the way that you have made your opening remarks — that it wants to speak to China in a condescending way from a position of strength?”

“So was this carefully all planned and was it carefully orchestrated with all the preparations in place?” he said. “Is that the way that you had hoped to conduct this dialogue?”

“This is not the way to deal with the Chinese people,” he said. “If the United States wants to deal properly with the Chinese side, then let’s follow the necessary protocols and do things the right way.”

The first high-level meeting between Washington and Beijing under President Joe Biden got off to a rocky start. It likely will set the tone of the U.S.-China relationship for the foreseeable future.

The venue, Hotel Captain Cook in Anchorage, is where Chinese President Xi Jinping and his wife, Peng Liyuan, had a seafood dinner with then-Alaska Gov. Bill Walker when he visited the state in 2017.

Xi was on his way home from a meeting with then-President Donald Trump in Mar-a-Lago. The Alaska stop signaled China’s interest in the Arctic, and the governor talked about export of liquefied natural gas to Asian markets.

This time there was no dinner. Instead, the two sides battled over a new world order, eager to make the case for their respective views of the future.

Blinken shot back: “A hallmark of our leadership, of our engagement in the world, is our alliances and our partnerships that have been built on a totally voluntary basis.”

Michael Hirson, practice head for China and Northeast Asia at the Eurasia Group consultancy, wrote in a Thursday memo that “Both capitals are focused far more on their rivalry for influence in third countries and on domestic policies to advance tech and economic competition.”

“Blinken and Sullivan will be fresh from consultations with Japan and South Korea, while Biden held the first-ever meeting of leaders of the Quad (U.S., Japan, India and Australia) on Friday,” Hirson wrote. “Beijing, meanwhile, is using vaccine diplomacy and an ambitious trade agenda to avoid being outflanked by the U.S.”

Russian Foreign Minister Sergey Lavrov visits China on Monday to meet with Wang at the Chinese side’s request. Wang is also scheduled to travel to Turkey on Thursday, according to Ankara.

After the two-day session concluded, Sullivan told reporters: “We were cleareyed coming in, we’re cleareyed coming out, and we will go back to Washington to take stock of where we are. We’ll continue to consult with allies and partners on the way forward.”

On such issues as Iran and Afghanistan, where America and China could cooperate, Sullivan said that “we’ll continue to work with China going forward.”

After hours of talks in the icy North, the two sides walked away, pretty much convinced of what they knew before.