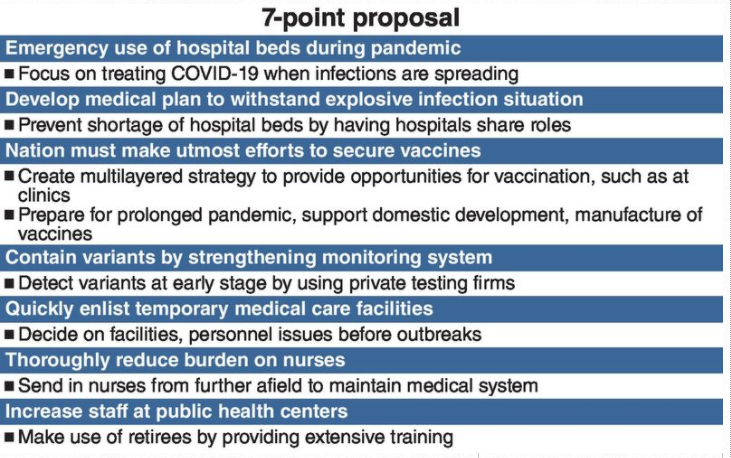 The fragility of Japan’s medical system has been exposed as many COVID-19 patients could not be admitted to the hospital amid a third wave of novel coronavirus infections.

There is a concern that variants, believed to be highly infectious, may spread in the future.

With the lifting at the end of Sunday of the state of emergency that covered the prefectures of Tokyo, Kanagawa, Chiba and Saitama, The Yomiuri Shimbun has compiled a seven-point proposal to strategically establish a system to prevent another spread of infection on the premise that virus countermeasures will need to be implemented over an extended period of time.

Japan is at the top level among developed countries in the number of hospital beds per capita, about five times that of the United States and Britain, while the number of infection cases in the nation has been considerably lower than in such countries. Nevertheless, Japan quickly fell into a hospital bed shortage for COVID-19 patients.

Excluding psychiatric beds, the percentage of hospital beds reserved for coronavirus patients is just over 3%. Meanwhile, private hospitals, where governmental authority is not easily exercised, account for 80% of the total number of hospitals. Thus, it was hard to make progress in securing hospital beds for such patients.

The hospital bed shortage problem highlighted the rigidity of Japan’s medical system, which was unable to respond quickly to the contingency of an explosive infection situation.

In New York, where medical care collapsed in spring 2020 due to a sharp increase in the number of infected people, the governor ordered all hospitals in the state to increase the number of beds for virus patients. State laws in each U.S. state allow governors to issue mandatory measures in emergency situations.

On the other hand, the central and local governments in Japan, which experienced the first and second waves of the pandemic in spring and summer last year, failed to take any strategic measures to secure hospital beds even though they had enough time until the third wave.

The prefectural governments’ plans to secure beds based on the central government’s guidelines have been lax. Thus, localities where the infection had spread were forced to increase the number of hospital beds.

Japan’s spending on health care as a percentage of gross domestic product (GDP) in fiscal 2017 was 10.7%, the sixth highest figure among member countries of the Organization for Economic Cooperation and Development (OECD).

Despite the huge amount of taxpayer money and insurance premiums spent on medical care, the government has downplayed preparations against new infectious diseases.

Many medical institutions have difficulty accepting COVID-19 patients because of a shortage of doctors and nurses who can deal with the coronavirus even if beds at such hospitals are available. It was not the number of beds that was tight, but the number of medical personnel.

The government must create a plan that takes into account both medical facilities and personnel availability, and for the entire medical system during the outbreak of infections to shift its focus to treating COVID-19.

Many lives of COVID-19 patients who become seriously ill can be saved if they receive proper treatment, yet there was a shortage of hospital beds for seriously ill coronavirus patients.

Local governments are now asked to play a central part in determining the roles of medical institutions in accordance with their scale and capabilities.

It is important for Japan to establish a system to quickly enlist temporary medical and care facilities in case of an outbreak of an infectious disease.

It is necessary to reduce the burden on nurses who have been working strenuously on the front lines. Also, it is essential to strengthen the system at public health centers, which serve as command posts for local governments to deal with the virus.

The key is for the local governments and local medical institutions during normal times to discuss the medical system in case of the spread of infection.

The central and local governments as well as medical institutions need to create effective medical plans with a sense of urgency. The central government should provide financial support to strongly promote these measures.

The proliferation of COVID-19 vaccines will determine whether Japan can stop the virus from spreading again. Municipalities should develop plans that allow flexibility for mass vaccinations at large venues as well as individual vaccination through clinics and house calls.

Japan has lagged behind in developing and securing vaccines. According to a private research firm, the nation was 33rd among the 37 OECD member countries to start its COVID-19 vaccination program.

Vaccines from countries such as the United States, Britain, Germany, China and Russia have already been put into practical use, but in Japan, domestic manufacturers are still at the clinical trial stage. Supplying vaccines for new infectious diseases is directly related to national security.

The government should make it a national strategy to foster vaccine manufacturers that can compete with the rest of the world and create an environment in which Japan can domestically manufacture foreign firms’ vaccines.

Should variants thought to be even more infectious than the original virus become prevalent, similar measures taken these days may not be able to stop the variants from spreading.

The government must ask local governments as well as private testing companies and universities to quickly improve testing systems for mutated viruses so that they are ready to detect variants across a wide range.

— Members of The Yomiuri Shimbun’s Editorial Bureau, Editorial Board and the Yomiuri Research Institute formulated these proposals through discussions and interviews with experts.