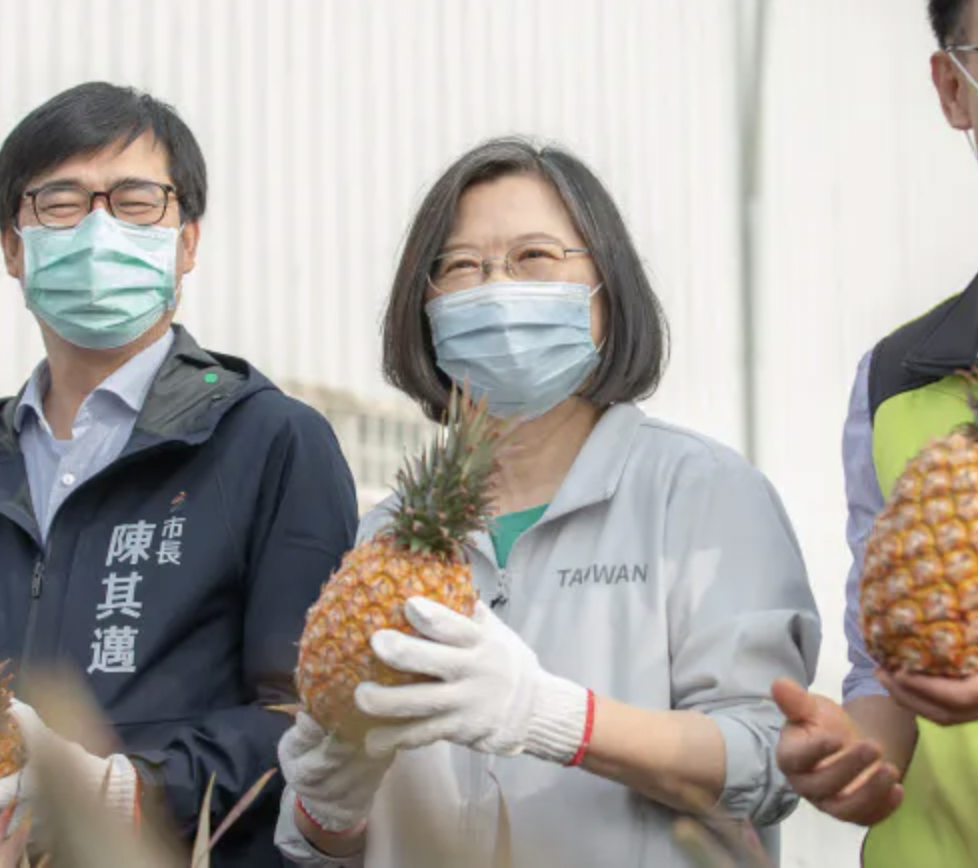 Taiwan is loudly protesting a total import ban on Taiwanese pineapples imposed by China in March. Taiwan claims that the Chinese accusation that the fruit is infested with pests is “an unjustified complaint to exert political pressure.” The Taiwanese government quickly took a position that Taiwan is “not bending under Chinese pressure.” An atmosphere of support grew in other countries, including Japan, which joined the effort to purchase more Taiwanese pineapples, further boosting the feeling of friendship with Taiwan. I detect something that’s not quite right about Taiwan’s response to the Chinese ban, however.

After the Chinese authorities announced the ban on Taiwanese pineapples on February 26, Taiwanese President Tsai Ingwen didn’t waste time. She immediately traveled to pineapple-producing regions in the south, stood in the middle of a pineapple field, picked up one of the fruit, and said, “No one should worry. The government will take care of you.” The president’s performance, repeated many times, conveyed a message that was easy to understand and gained support: “Taiwan is bravely fighting China the bully.” A major Japanese corporation has shown interest in importing a large number of Taiwanese pineapples, reportedly signing a contract for an amount that exceeds the total of last year’s shipment to China.

“Thank you Japan!” Tsai tweeted in Japanese, making those involved in Japan-Taiwan bilateral relations proud of the two countries’ friendship. Yet the Tsai government seems to be manipulating public opinion.

According to the Council of Agriculture (Taiwan’s agriculture ministry), the country produced over 400,000 tons of pineapples last year. Most, 90%, was consumed domestically and the rest, only 10% of the total production, was exported. Ninety percent of the exports were shipped to China. Although the pineapples exported to China had a total value of a little over 5 billion yen, emphasis was put on the fact that “90% was exported to China,” leading many to believe that China’s import ban was a much bigger problem than it actually was.

The truth is, Taiwan’s total exports to China reached a record 151.4 billion dollars (approximately 16.5 trillion yen) last year. Although China is clearly an indispensable market for Taiwanese exports, China-bound pineapples only account for 0.03% of total exports to China. Tsai’s dramatic response to the ban, as if Taiwan’s economy was on the verge of collapse, partly stems from the fact many of the southern region’s farming population are supporters of her ruling Democratic Progressive Party.

This is the reason why China is claiming Taiwan, not China, is using the dispute over pineapples as a political tool. Furthermore, while Taiwan stresses that support for the pineapple trade symbolizes Japan-Taiwan friendship, Taiwan has maintained a total ban on agricultural products from five Japanese prefectures including Fukushima and Ibaraki for ten years since the Great Japan Earthquake, calling the food produced in these prefectures “nuclear food.” Taiwan remains silent on this point.

The Tsai administration is wary of dealing with the “nuclear food” issue, fearing it may trigger anti-government protests. Fortified by a strong backwind created by the success of its handling the pineapple export issue, the administration dismissed an opposition party’s question about imports from the five Japanese prefectures at the parliament on March 12, saying, “Lifting of the import ban on products from (the five Japanese prefectures) has not been discussed at all” in the government.

The story of the Taiwanese pineapples shouldn’t be accepted simply as a beautiful story of friendship. We must view the situation with a cool head. (Slightly abridged)