Yumi Akabane, a student at Akita International University, has begun supporting agriculture in Akita Prefecture instead of studying in France. (Photo taken in Yokote City, Akita Prefecture, in January.)

The new coronavirus pandemic has put a stop to many overseas study programs and forced many university students to give up their dream of studying abroad. Amid this situation, some students have begun to take on new challenges in different fields in Japan in a bid to accumulate experiences as an alternative to studying abroad. Companies are also paying attention to the energy of these students, trying to turn a crisis and setbacks into opportunities.

Yumi Akabane, a 20-year-old sophomore at Akita International University (AIU) in Akita City, was diligently shoveling snow on a fruit farm in Yokote City, Akita Prefecture. If it had not been for the COVID-19 pandemic, she would have been studying at the Grenoble Institute of Political Studies in France by now. She had dreamed of studying journalism there for one year to become a news anchor.

AIU closed its campus, so she had no choice but to return to her parents’ house in Tokyo. But she roused herself and began working at a theatrical company in Akita as an intern last autumn. But her energy did not stop there. In January this year, she established a volunteer group to support agriculture. Akabane says her dream is “to create a bright future for Japan’s agriculture as a journalist.”

According to the latest data provided by the Japan Student Services Organization (JASSO), some 115,000 students of technical colleges or higher educational institutions went overseas to study in fiscal 2018. Nearly the same number of students would have studied abroad in fiscal 2020 as well if it had not been for the COVID-19 pandemic. Another survey released by JASSO found that by July last year about half of the universities surveyed had canceled their study abroad programs due to the pandemic, forcing many students to give up studying abroad.

But these students are seeking to develop their skills by accumulating experiences in Japan.

Jun Takase, a 22-year-old sophomore at Aoyama Gakuin University who was planning to study in the U.S., has been working at the Japanese arm of Hong Kong-based travel booking platform operator Klook since January this year. As an intern conducting market research, he reads documents written in English every day in a bid to put himself even a little in an environment similar to that of studying abroad.

Other students realized through working in Japan that they had been led to believe that they can accumulate overseas experience only during their university years. Mio Saito, a 22-year-old senior at Yokohama City University, had to give up working as an intern in Singapore last year. While she spent her days in Fukushima City, where her parents live, she developed an interest in regional revitalization and visited Miyagi and Hokkaido prefectures. Through working as an intern outside of her hometown, Saito says she was exposed to various ways of living and acquired greater flexibility in career choices. “I will have an opportunity to study abroad even after finishing university,” she says.

Students who were preparing to study abroad are despondent over the lost opportunity. But the rapid spread of online communications my change the concept of studying abroad going forward.

For example, the Tokyo University of Foreign Studies is planning to add more night classes to allow its students to take specialized courses of foreign universities across time zones starting fiscal 2021. The university will offer classes in which students can engage in interactive communication with students and teachers in foreign countries.

Recruit Shingaku Soken President Hiroshi Kobayashi points out, “There is a possibility that students will be able to take classes of multiple overseas universities in one year.” Extensive online classes may become a criterion for students in choosing universities in the future. 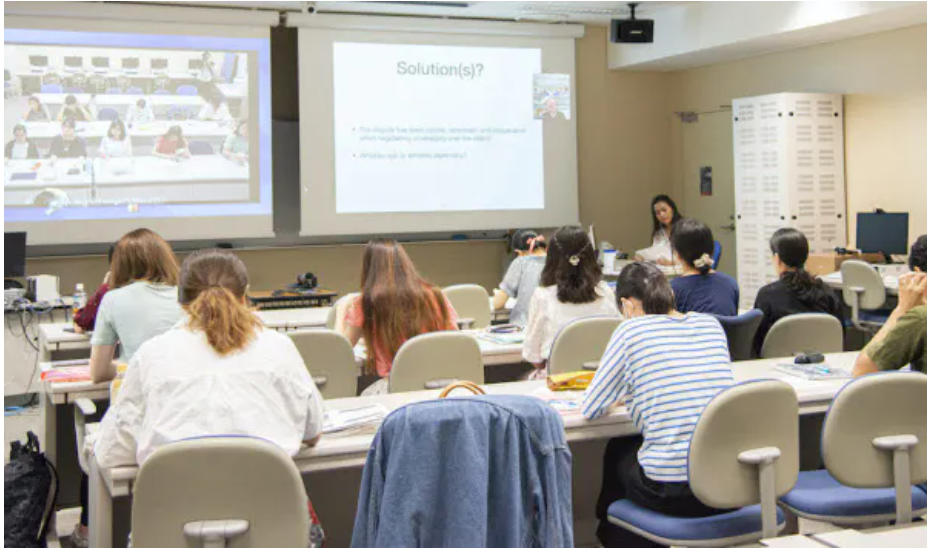 The Tokyo University of Foreign Studies will offer night classes so students can take courses of foreign universities. (Photo taken during a class conducted in 2019.)