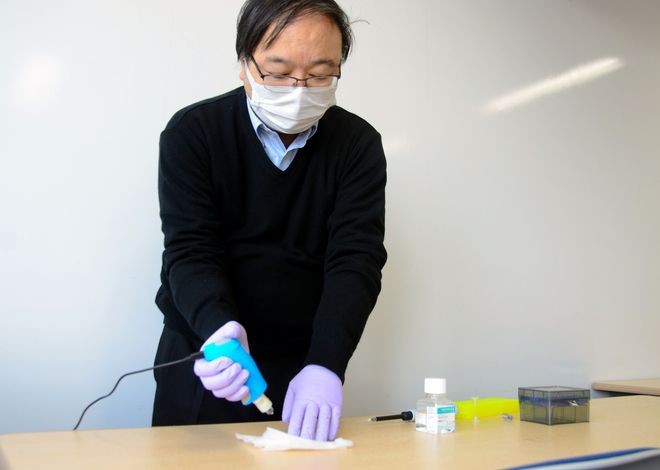 A man demonstrates how to use the device that injects vaccines by using gunpowder in Suita, Osaka Prefecture. (Yusuke Ogawa) 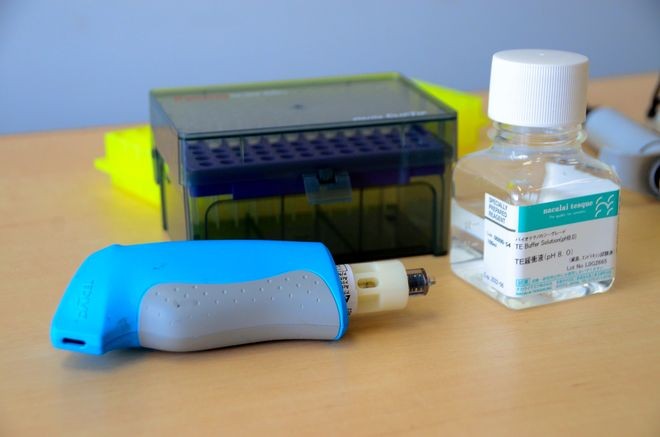 SUITA, Osaka Prefecture–A researcher holds up a blue plastic medical device, resembling a crafting glue gun, which could one day replace needles as the main delivery method for vaccines.

It is mid-January at Osaka University’s Center of Medical Innovation and Translational Research, and the expert is giving a visual demonstration of how the new device works using water in lieu of a vaccine.

The experimental tool is designed to set off a charge of gunpowder to administer the DNA vaccine that has been developed in collaboration with the university’s corporate partners, including AnGes Inc., a drug maker based in Ibaraki, Osaka Prefecture.

It may seem scary, but when put to use during the lab demonstration, the gunpowder that ignited in the device produced anything but a loud bang.

The only sound that could be heard in the room was an electronic beep signaling that the injection procedure was complete. 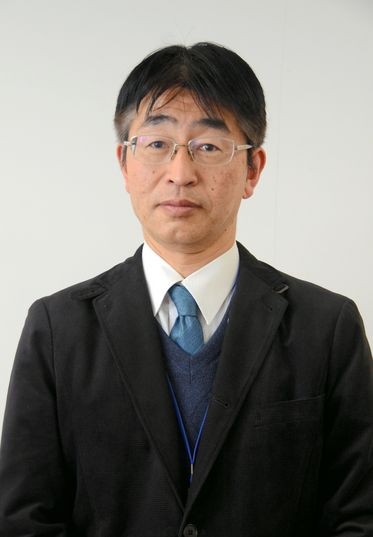 “You must have been surprised because the process finished very quickly,” said a grinning Hironori Nakagami, a health and development medicine professor, who teaches classes at the university backed by third parties.

It all sounds like something out of “Star Trek,” but the researchers behind the project believe they have found a way to painlessly inject a vaccine into a patient without needles.

The experts say their approach could lead to a painless and more effective method of vaccine delivery that would also be safer for health care workers to administer.

The development comes as people in Japan have started receiving vaccines against the novel coronavirus after vaccinations began in the United States, Europe and elsewhere.

The device works a little like deploying a car airbag.

An electrical charge ignites a tiny amount of gunpowder to generate gas pressure. A piston then moves, sending the vaccine shooting through tiny apertures. When used on a person, it penetrates into the top layers of their skin relatively painlessly.

Under the conventional method to deliver a vaccine, a needle needs to be inserted deep into a person’s arm, causing pain and sometimes inducing fear at the prospect.

The COVID-19 vaccines already available, including one offered by the U.S. pharmaceutical giant Pfizer Inc., get injected into a person’s muscle.

But this new method, developed in partnership with Osaka-based chemical manufacturer Daicel Corp., uses an intradermal injection. It works by targeting the outer-most layers of the skin, called the epidermis and cutis, which are home to more immune cells.

Nakagami said that at first, he doubted gunpowder could be used to administer vaccines. But he changed his mind as the research progressed.

“The vaccine injection and other medical techniques using needles have not changed drastically over the decades,” he said. “A device free of needles will help to prevent accidents in which health care providers and others mistakenly pierce their own skin with used needles.”

According to Nakagami, another advantage of the new technology is that, in some cases, patients “may not feel pain at all.”

The researchers also confirmed through experiments that the test vaccine succeeded in significantly stimulating immune cells using anywhere from one-fifth to one-10th of the normal amount needed when injecting it into a muscle.

In November last year, a clinical study started at Osaka University Hospital into the safety and effectiveness of the technology. Twenty adults have already received inoculations, and the first round of analysis is expected to be carried out by the end of March.

No serious side effects or complaints of pain have been reported yet, although the researchers note they will need to carefully monitor future developments.

As it would be difficult for the university alone to carry out a larger-scale clinical trial, it is expected to seek support from businesses and other entities in the future.

(This article was written by Yusuke Ogawa and Shigeko Segawa.)