China and North Korea are making preparations to reopen their land border and resume shipments of cargo after a period of total border closure since last summer under the COVID-19 pandemic. It was learned that the shipment of aid supplies to the North will be given priority. North Korea has been suffering from a prolonged shortage of food. The cargo is expected to start moving in mid-April.

According to sources involved in China-North Korea trade issues, China has already begun transporting rice, corn, soy oil, flour, and other aid supplies and materials, starting in February with shipments from Jilin Province to Dandong City in Liaoning Province, which is located on the China-North Korea border. Approximately 1,000 containers of aid supplies and commercial goods, such as plastic sheets for agricultural use, have been staged in Dandong City waiting for shipment. Goods from all over China are being loaded in containers in Dalian City, also in Liaoning Province. It is reported that these containers now number in the thousands. 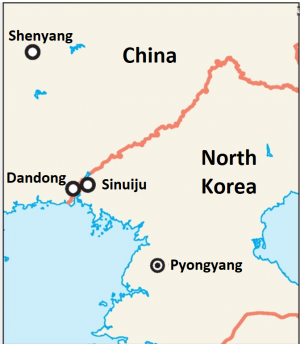 Since coronavirus cases in China subsided in February, the two countries have engaged in serious talks on the resumption of bilateral trade. Notifications have been issued to concerned parties urging them to start preparations for reopening the border. North Korea, however, has not lifted its own stringent anti-virus restrictions. For this reason, the trade will be limited for the time being to a rail route between Dandong and North Korea’s Sinuiju, which directly connects to Pyongyang.

In Sinuiju, North Korea, preparations are under way. These include setting up a warehouse for the quarantine of incoming goods and a new PCR testing facility. Shipments by truck are expected to start as soon as those preparations are complete.

North Korea closed its border with China in January 2020, when COVID-19 cases increased in China. In August, North Korean leader Kim Jong Un announced further tightening of the border to implement anti-virus measures, halting almost all traffic to and from China. According to China’s General Administration of Customs, total trade between China and North Korea was about 540 million dollars (approximately 5.6 billion yen) in 2020, a drop of 81% from the previous year.