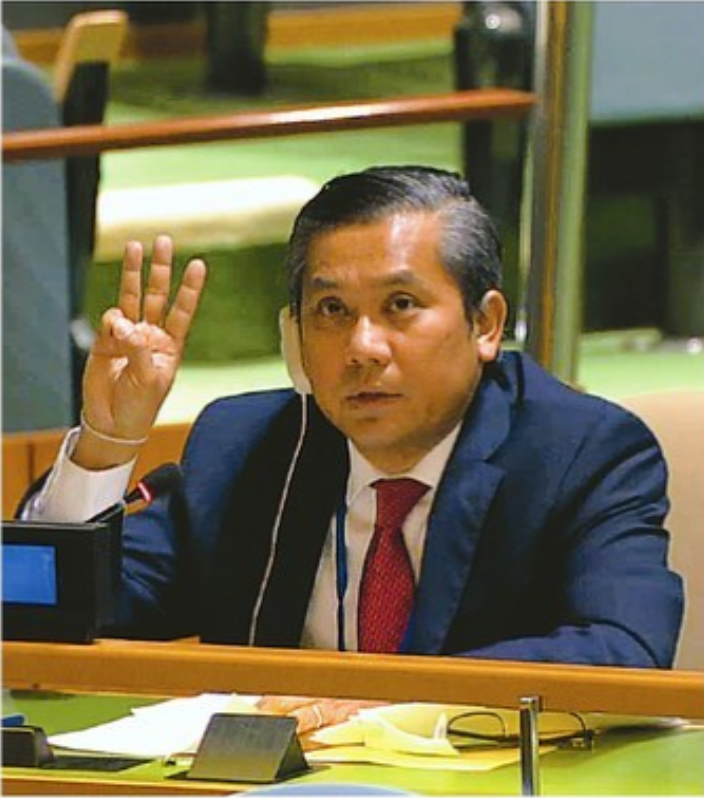 U Kyaw Moe Tun, Myanmar’s Ambassador to the UN, raises his hand in the “three-finger salute” at the UN General Assembly on Feb. 26 (photo from materials provided by the UN)

By Toshiyuki Sumi in New York

At the UN General Assembly on Feb. 26, U Kyaw Moe Tun, ambassador of Myanmar (Burma) to the U.N., publicly denounced the coup d’état staged by the Myanmar military. In an exclusive interview with the Mainichi Shimbun on March 22, he said that sanctions would be effective in ending the coup d’état. “I would like to see Japan immediately cut off all business and financial ties that have connections with the military,” he said. He also urged the Japanese government to impose economic sanctions on companies that have ties with the Myanmar military.

At the UN General Assembly on Feb. 26, U Kyaw Moe Tun attracted attention when he denounced the Myanmar military and raised his hand in the “three-finger salute,” which has come to symbolize Myanmar’s protest movement against dictatorship. He said he had been asking himself since the Feb. 1 coup d’état “what I can do” as UN ambassador, and “thought taking the opportunity of the UN General Assembly would have the maximum positive impact on young people who risk their lives in protest.” He was worried about his parents, who live in Myanmar, but he said they told him they were “proud of him” after the speech.

After the speech, the Myanmar military announced his dismissal as ambassador, saying that he had “betrayed his country.” They tapped Deputy Ambassador U Tin Maung Naing as chargé d’affaires, but he declined the position and resigned. U Kyaw Moe Tun is still Myanmar’s ambassador to the UN, even as the military has accused him of treason. The military side has instructed all Myanmar embassies overseas “not to have any contact” with him.

U Kyaw Moe Tun said he is “thankful” for the prosecution by the military: “The dictatorial military and innocent civilians are locked in a confrontation. The military’s accusing me seems to prove that I am on the civilian side, not on the military side. I’m proud of that.”

On March 10, the UN Security Council issued a statement by the Security Council President condemning the oppression, but it did not mention the imposition of sanctions. Europe and the United States have invoked sanctions, and U Kyaw Moe Tun called on the Security Council to implement sanctions, saying, “If the international community coordinates and imposes strong sanctions, it will greatly help end the coup d’état.” “I would like to see the international community take all steps (to drive the military into a tight corner), such as embargoing weapons. There is no time left for the people,” he urged.

China, which has the right of veto at the Security Council, has ties with the Myanmar military and is reluctant to interfere through sanctions or other means. U Kyaw Moe Tun emphasized that China has also built good relations with Aung San Suu Kyi’s National League for Democracy (NLD). He expressed his hope that China will take a forward-looking attitude toward sanctions, saying, “Some people in Myanmar think China supports the military and so have a bad impression of it. That is why this represents a golden opportunity for China to show that it is on the side of the people, not the military.”

U Kyaw Moe Tun has been Myanmar’s ambassador to the UN since October 2020. He studied abroad at the International University of Japan, which is located in Niigata Prefecture. He said to the Japanese people, the government, and Diet members, “On behalf of the people of Myanmar, I would like to express my heartfelt gratitude to you for your continued support.”