SEOUL — North Korea’s breaking of its 12-month hiatus on ballistic missile testing has rattled neighbors South Korea and Japan, while the U.S. appears to be less concerned.

The isolated nation launched two ballistic missiles into the Sea of Japan from South Hamgyong Province in the country’s east early Thursday.

The tests came four days after the country fired two cruise missiles into the Yellow Sea. Although cruise missiles are not subject to United Nations sanctions, ballistic missiles are because they are considered more threatening given their capacity to deliver nuclear weapons.

The missiles flew about 450 kilometers and landed outside Japan’s exclusive economic zone, the Japanese government said.

“The first launch in just less than a year represents a threat to peace and stability in Japan and the region and violates United Nations resolutions,” Japanese Prime Minister Yoshihide Suga said.

With Tokyo preparing to host the Olympics in July, Suga vowed to ensure the safety and security of the Games, saying he would “thoroughly discuss” North Korea, including the recent launches, with U.S. President Joe Biden when he visits Washington next month.

The U.S. seems less concerned about the recent tests than Japan, however, with Biden referring to the cruise missile tests over the weekend as “business as usual.”

“There’s no new wrinkle in what they did,” he told a reporter on Tuesday.

The launches highlight the threat that the country’s illicit weapons program poses to its neighbors and the international community, the U.S. Indo-Pacific Command said in a statement on Thursday.

Yoichiro Sato, a professor at Ritsumeikan Asia Pacific University in Japan, said it is unlikely that North Korea intended to provoke the U.S. through the ballistic missile launch.

“The North Korean choice of a short-range vehicle avoided landing in the Japanese EEZ and stayed consistent with the previous U.S. policy under Trump of not problematizing testing of short-range vehicles as a violation of the UNSC resolution,” Sato said.

Regarding Japan’s response, Sato said Tokyo will carefully be analyzing the trajectory of the recent ballistic missile launches.

“North Korea, in previous tests, has made improvements on its short-range vehicles to make them less susceptible to interceptions,” Sato told Nikkei Asia. “If the recent testing does show such an improvement, debates [regarding] Japan’s missile defense will actively take place.”

Given the need for any country’s military to test its latest technology, the recent launches may be nothing more than just that. In other words, they could be meant for technical evaluation purposes and not to antagonize its neighbors or the U.S.

“North Korea is doing what North Korea always does: ensuring its weapons systems are progressing to the maximum extent possible,” Daniel DePetris, a fellow at Defense Priorities, a Washington-based think tank, told Nikkei Asia. “The North Koreans will continue these types of military activities until diplomacy with Washington resumes — assuming it resumes.” 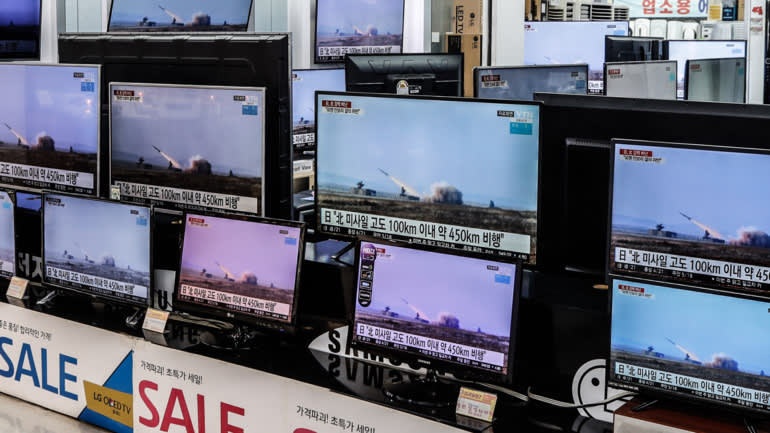 TV screens show a news program reporting on North Korea’s missiles with file footage at an electronics shop in Seoul on Thursday.   © AP

Despite North Korea rejecting Biden’s recent calls for talks, they are not completely ignoring the new U.S. administration either.

“North Korea ignored the earlier U.S. call for a discussion via the New York channel, but is responding to the U.S. call by an act of attention seeking,” Sato said.

Attention seeking it might be, but whether such moves will provide a desirable change in policy direction by the U.S. is yet to be seen.

DePetris said it is unlikely that Washington-Pyongyang diplomacy will resume before the U.S. completes its North Korea policy review.

“Kim has been clear: Unless and until the U.S. drops what he sees as maximalist demands, diplomacy is on ice,” he said. “In the meantime, expect North Korea to continue investing and refining its military systems.”

Launching missiles early in the term of a new U.S. administration is nothing new for North Korea.

In April 2017, just three months into Trump’s presidency, North Korea fired a medium-range ballistic missile from its eastern port of Sinpo into the Sea of Japan. They proceeded to test an intercontinental ballistic missile in July. Many analysts thus expected these missile tests to happen sooner rather than later in Biden’s term.

“Given North Korea’s weak position vis-a-vis the United States, missile testing is the one action Kim can take that at least provides Pyongyang with some degree of leverage,” DePetris said.

Various factors will affect the chances of U.S. diplomacy with both Koreas resuming in a positive direction.

According to Sato, one important factor will be next year’s South Korean presidential elections.

“The continuation of a pro-North liberal presidency in South Korea will allow North Korea breathing space and stay cool on the U.S. neglect,” he said. “[However], a new conservative regime in the South would make North Korea more desperately craving U.S. and/or Japanese attention.”