LNG bunkering hub in Yokohama to be completed this spring 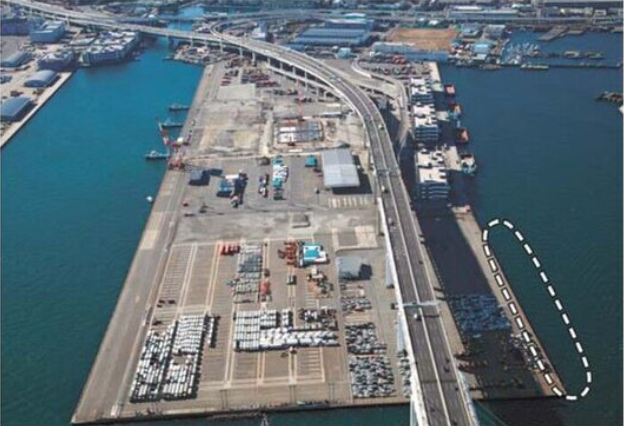 Site of the LNG bunkering hub at Honmoku Pier is demarcated by the dotted line. (photo courtesy of Yokohama City)

An LNG bunkering hub will be completed at Honmoku Pier at Yokohama Port this spring. LNG bunkering vessels will have priority use of the hub, and operations and fuel supply will start within the year. LNG-powered ships are eco-friendly as their emissions cause little environmental load. To promote port calls, Yokohama City will introduce a system in April to waive harbor fees.

This LNG bunkering hub will be Japan’s second after that in Ise and Mikawa bays. The LNG bunkering vessel will be owned and operated by Ecobunker Shipping (Naka ward, Yokohama). The vessel was launched last August and is now being loaded with the necessary equipment. The vessel will be loaded with LNG at facilities in Sodegaura City in Chiba Prefecture, and it will supply the fuel to LNG-powered ships. The bunkering vessel’s LNG tank capacity will be 2,500m3 and its capacity for IMO-compliant marine fuel oil will be 1,500m3.

European countries and Singapore are moving forward with creating bunkering hubs in anticipation of the spread of LNG-powered ships. By developing this bunkering hub ahead of other East Asian nations, Yokohama aims to enhance its port’s international competitiveness. (Abridged)